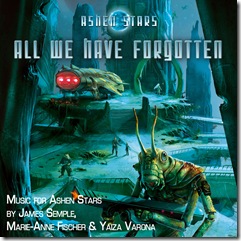 A lot of people – including me – are using video game or movie soundtracks as background music for our roleplaying sessions. Alas these soundtracks are often not a perfect fit. Some tracks may be too distracting when played in the background or are too iconic. You can’t just use for example the Star Wars soundtrack without conjuring up images of Jedi Knights, Stormtroopers, Wookiees, etc. in the minds of your players. Over the last few years several artists have tried to create music more suited for use at the game table. Erdenstern or Midnight Syndicate come to mind.

But the best roleplaying game soundtracks are in my opinion created by James Semple and his team (Marie-Anne Fischer and Yaiza Varona). In cooperation with Pelgrane Press they released soundtracks for several games of the Gumshoe line including Esoterrorists, Trail of Cthulhu and now Ashen Stars. Last year I had the pleasure to write a review of the Eternal Lies Suite, which is undoubtedly the best piece of music ever written for a roleplaying game.

All We Have Forgotten is the new soundtrack for use with the Ashen Stars roleplaying game. It contains 10 original tracks and 4 stings. Stings are short bursts of music that can be used to mark the end of a scene. The majority of the tracks are very atmospheric and work great as background music. The quality and style of the music is on par with what you expect from a Sci-Fi movie soundtrack. If you enjoy the other works of James’ team you won’t be disappointed.

All We Have Forgotten is a soundtrack that should definitely be on the playlist of every GM. It’s not only great as background music but also can be used for inspiration during prep. Even though it has been created with Ashen Stars in mind, it can easily be used in other Sci-Fi or modern games as well. The only drawback is the length of the album since the total playtime including the stings is just about 27 minutes.