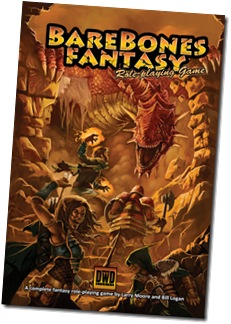 I think I first read about Barebones Fantasy by DwD Studios a couple of weeks ago when I stumbled upon a post showcasing its cover on Google+. I have to admit that the cover did its job tremendously – it immediately made me interested in the game. So I started following the news about this game and finally picked it up from DriveThruRPG on the day of release.

So what is Barebones Fantasy RPG anyway? As the name implies it is a rules-light fantasy roleplaying game, but it’s not as barebones as you might expect. The 84-paged core rulebook contains all the rules you need to run the game, an extensive bestiary, and even a setting.

The interior of the rulebook is all black and white but is very well laid out. Because of the small size it probably looks great on tablets, too. But I haven’t checked that yet.

What sets Barebones Fantasy apart from a lot of other rules-light fantasy games are mainly two things: first it uses a percentile dice mechanic and secondly it uses the iconic fantasy classes as skills. So instead of having a Cleric class, there’s a cleric skill that allows you to perform priestly deeds. I like that a lot. What I also like is that BBF doesn’t use any complicated formulae to calculate skill chances and other values derived from the attributes. For a percentile system there’s surprisingly not a lot of number crunching involved.

Character creation is pretty fast. You roll up the four attributes (Strength, Dexterity, Logic and Willpower), select a race (Elves, dwarves, halflings, and humans are available), and select your skills. After that you calculate the skill scores and come up with one beneficial and one hindering descriptor (think of  something like “skilled hunter” or “has a limp”). Last but not least you determine your moral code. You basically have to decide how Kind, Focused, Selfless, Honorable and Brave your character is. This moral code is meant as a guideline for the player on how to play his character.

Another thing I like about this game is how magic works. The number of spells characters can cast is quite limited but each of the spells is very flexible. The Aid spell for example allows the caster to buff one of another character’s attributes. Which attribute that is can be chosen each time the spell is cast. The spells also improve with the caster’s level in the Spellcaster skill.

For a game that calls itself barebones it is surprisingly complete. You are looking for rules to create your own magic items? There in there. You like extensive equipment lists? You won’t be disappointed. In your opinion no RPG is complete without a bestiary? If so, you will be glad to hear that BBF’s bestiary contains not only a bestiary but also guidelines for monster creation! There is even a section that contains an adventure idea generator which allows you to roll up a basic adventure in mere minutes. There’s even a random dungeon generator included. The book also contains some details on the Keranak Kingdoms, BBF’s setting. The setting descriptions are in very broad strokes, but should be enough for any veteran GM to get the ball running.

The game is currently only available digitally, but what you get in that 25 MB ZIP file would make a great boxed set. Aside from the core rulebook PDF,  it contains a 16-paged adventure called “Maidens of Moordoth” (which I haven’t read yet), a player reference sheet, the character sheet, two maps of the setting (one with and one without hexes), and last but not least you get printer friendly versions of all of the PDFs.

The whole package costs mere $9.99 which is a great price for so much stuff included. What’s even better is that the rules are licensed under the Creative Commons Attribution-Non Commercial-Share Alike license. Which means you are allowed to create your own derivative works like adventures etc. The official DwD Studios site even has a page that let’s you download the interior background graphics, so that you can create your own documents with the official look and feel.  Barebones Fantasy actually makes me excited about running a fantasy game again!