I have a kind of love-hate relationship with Kickstarter. One the one hand I am totally excited about all the cool new and amazing projects I can support there but on the other hand I too often get tempted to put down my money even though I probably shouldn’t. But let’s not think about money for a moment but focus on the excitement!

Hollow Earth Expeditions: Revelations of Mars
This is one of the products I’ve been waiting for for a very long time. Back in 2010 when I visited Gen Con I was hoping I could already pick it up there, but it had been delayed. Lack of time and money have obviously been the cause for this and the Kickstarter is meant to finally get Revelations of Mars done. So what is Revelations all about? It’s a sword and planet sourcebook for Hollow Earth Expedition, the pulp RPG using the Ubiquity System. At the time of this writing the project has already been funded and several stretch goals have been reached including new addons (like special Relevations of Mars dice), a free Fat Dragon Martian terrain set, and a free adventure. The Kickstarter will end in about 59 hours, so you still have a chance to pledge a few dollars.

Space 1889
Space 1889 is probably the granddaddy of all steampunk RPGs even though they used the term Victorian Sci-Fi back in the day. Alas the original rules were a bit clunky, so German publisher Uhrwerk Verlag got the license to produce a new version using Exile Games’ Ubiquity rules. Now Chronicle City’s Angus Abranson is running a Kickstarter for the funding of an English-language version of this new Space 1889. Aside from the regular edition, backers can get a special limited edition book bound in faux leather and heat-branded with the Space 1889 logo. And if you’re pledging £100 or more you’ll even get a special edition bound in real leather, signed and numbered. Sweet!
As with the Revelations of Mars KS, the goal has already been reached and several stretch goals have been unlocked. The KS will run for another 27 days, so you still have some time to decide whether you want to support the new Space 1889 or not. 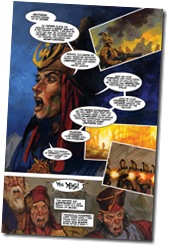 I have to thank my fellow blog author Roberto for pointing out this Kickstarter. Iron Empires is the comic series Luke Crane’s award-winning RPG Burning Empires is based on. Even though I wasn’t able to wrap my head around the rules in Burning Empires, I still loved the setting and artwork which were created by the creator of the comic series, Christopher Moeller. I haven’t read any of the comics yet, but luckily there are several pledge levels were you can get the PDFs of the older books in the series.
Void will be a 112-paged hardcover book and like its predecessors be a standalone, complete story. The KS hasn’t reached its goal of $16,000 yet, but there are still 23 days to go. For a pledge for just $10 you get a digital copy of the book and for just $10 more you even get digital copies of the first two books. So what are you waiting for?

These are the Kickstarters I supported in the last few days. Is there anything else interesting I should know about? What Kickstarters have you backed recently? Please share your thoughts in the comment below!

OGT available at Amazon.co.uk and Amazon.de