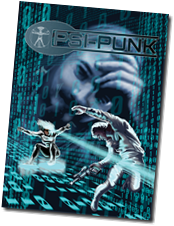 Psi-Punk is a 193-paged cyberpunk roleplaying game written by Accessible Games’ Jacob Wood powered by the Fudge System. Like many other recently released roleplaying games it has been funded over Kickstarter. Although it didn’t do as well as Numenera or Fate Core, I am very glad it has met its funding goal. In a nut-shell it’s a trip back to the 80s and early 90s and I mean that in a good way!

Let’s have a look at the presentation of the book first. This review is based on a PDF copy graciously provided by the author, so I can’t judge the physical product. The PDF has a clear and simple layout. It’s not too fancy but readability is good. I especially like the artwork. The b&w interior artwork reminds me a lot of what you would expect from a game from the early 90s or late 80s. It fits the setting perfectly well, aside from a few pieces that look a bit off. But that’s probably just me. Overall the artwork and layout are pretty good, even though you can’t compare it with the full-color interiors that are so popular nowadays.

What sets Psi-punk apart from classic cyberpunk games is the setting. While you’ll find all the common tropes like cybernetics, megacorps, runners etc. there’s one addition: psionic abilities. The first chapter of the book gives a good overview of the history of the world of Psi-punk, gives information on the major nations (like the North American Union), important corporations (like Magicorp), and other organizations and factions. In Psi-punk there are people which can use psionic abilities to do incredible feats but there’s also technology able to emulate a psionicist’s abilities. These devices are usually called “magic”. Overall Psi-punk presents an interesting twist on the classic cyberpunk formula. It definitely has its charm, even though I have to cringe every time I read “magic”.

As I mentioned before the game uses Steffan O’Sullivan’s Fudge System. Fudge itself is more a toolbox than a game. The game master is encouraged to tinker with the rules and pick their favorite attributes, skills, etc. to their hearts content. Which is great for experienced GMs can be huge hurdle for people who are new to this particular role. While the basic mechanics are pretty easy, the sheer number of options can quickly be overwhelming. Looking deeper into the Fudge System would be beyond the scope of this review, but there are a lot of articles on Fudge on the ‘net and you can download the rules freely from the official website.

With Psi-Punk I was hoping for a more streamlined Fudge experience, but alas it retains a lot of the toolbox nature of the system. This may be a boon to experienced Fudge GMs, but some people may be put off. For example there’s no definitive skill list, but the skills listed are mere examples. Again, it’s nothing wrong with this approach, but it’s just not something I was hoping for. Character creation in Psi-Punk is a step-by-step point buy system with allows you to build basically every conceivable character. It’s definitely one of the strengths of the system.

Another aspect important in cyberpunk games is equipment. Players love their equipment lists and Psi-punk doesn’t disappoint here. While you don’t get dozens of different models of each type of weapon, instead there’s a list of generic weapons like three different handguns, three types of shotguns, and so on. There’s still a lot of variety and you can add “gifts” to your weapons to individualize them further. So you can add a laser scope to your rifles, or you can pick the “morphing” gift for your melee weapon, which allows the wielder to modify a weapon’s properties in creative ways. The list of available armors is pretty short, but using gifts and faults you can easily make things more interesting. There’s also a list of example “magic”, items which emulate psionic abilities, like Flight Boots or an Antipsi Circlet. If you love cybernetic enhancements for your characters you’re in for a treat. The list of cybernetic implants is quite extensive and the system easily allows you to add your own. Again, the strength of the Fudge System are shining through here. Last but not least there’s a section on vehicles. A short list of example vehicles should help you get started, but the vehicle rules allows the GM to easily come up with their own designs.

The vast majority of the book focuses on the Fudge rules and how to use them in your Psi-punk game. Especially interesting is the Chapter on Hacking. In Psi-punk you can not only hack computers with computers but you can also hack other people’s souls with your mind! The ‘Net also gets a psionic counterpart called the Astral Plane. Instead of dealing with intrusion countermeasure software in the regular ‘net you might have to fight spirits there. While I don’t have issues with Psi in my cyberpunk game, the idea of an astral plane sounds a bit too much like fantasy to me. But your mileage may vary.

Often GM chapters are pretty generic and rehash the same old tips you’ve read countless times before. While Psi-punk also has its fair share of generic DMing advice and some Fudge-specific stuff, there’s also some game-specific advice: How is death and dying handled in the year 2096? How does loot fit into the abstract Wealth system the game uses? Good stuff!

Last but not least Psi-punk features a sample adventure called “Brain.net” and an Appendix containing an adventure hook generator. There’s a one-paged index in the appendix that I totally missed when I first read the book – perhaps I shouldn’t write reviews when I am not fully awake.

I have to admit that I am a bit torn when it comes to Psi-punk. I like a lot about the game. For starters I applaud Jacob Wood for using the Fudge System for his game. Fudge is a game that has been overlooked by too many gamers and Psi-punk might help to generate more interest in Fudge in general. The artwork used fits the game perfectly and has a strong late 80s/early 90s vibe. The setting has all the classic cyberpunk tropes albeit with some twists.

On the other hand I was hoping for a more newbie-friendly approach to Fudge. Psi-punk still retains a lot of the toolbox aspects of the Fudge rules which may be great for experienced Fudge gamers but newbies might be easily overwhelmed. I’m also not too happy with the use of “magic” for psi-tech equipment and some of the fantasy elements like the Astral Plane.

But that said, Psi-punk is definitely a good game and is worth a closer look if you’re a fan of both Fudge and cyberpunk. The setting and the rules can easily be tweaked to fit your wishes and it should even be easy to remove the psi aspect completely, if you’re looking for more traditional fare.

If you got interested in Psi-punk, both the PDF and printed edtions are available from RPGNow for $19.99 (PDF), $30 (softcover) and $40 (hardcover) respectively.

The Endless Quest For A Science Fiction Campaign Setting