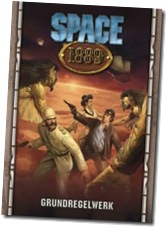 As you might already know, Chronicle City’s Angus Abranson is currently running a fundraiser on Kickstarter for the English version of the new Space 1889 game which was released in 2012 in Germany. German publisher Uhrwerk Verlag secured a license from Frank Chadwick back then. They released a beautiful new edition of Space 1889 which not only used a new rules system but also made some changes to the setting. At this point I should also mention that Pinnacle Entertainment released Space 1889: Red Sands back in 2010 which uses the Savage World rules. But while Red Sands is a single campaign book, this new edition is not limited to a single release. A lot of sourcebooks and adventures are already planned or already released (in German at least).

Angus Abranson graciously provided me with a copy of the German core rules of the new Space 1889 game which I’ll use as a basis for my preview on the upcoming edition.

Uhrwerk Verlag’s Space 1889 is a beautiful 264-paged book with a mostly black & white interior with a few pieces of color artwork thrown in. At first glance it’s obvious that the new edition is much more pleasing on the eyes than GDW’s original. The artwork fits the theme perfect and some pieces look like they were created back in the 1880s. It’s a joy leafing through the pages.

One of the first chapters deals with a very interesting and important topic: how to tell stories in Victorian space? The chapter not only provides the reader with some interesting background information on the SF genre but also talks about literature from the Victorian age and how you can use elements from contemporary literature in your games. This chapter is very helpful when it comes to setting the mood of the game and also shows that Space 1889 allows for a whole range of different campaigns.

The majority of the book focuses on the Space 1889 setting. Imagine a world inspired by the novels of Jules Verne, H.G. Wells or Arthur Conan Doyle. The solar system is a wondrous place full of life. Venus is a wild jungle planet inhabited by dinosaurs and lizardmen, Mars is home to an ancient civilization and full of secrets. At the height of the Victorian age, human pioneers are travelling to the other planets using steam-powered ether ships. Space 1889 is retro SF at its best.

The background information on each of the planets of the solar system is extensive. You get a detailed description, history, and even a planet-specific bestiary. The section about earth also gives a lot of background on the Victorian age, the Victorian society and their values. The book also doesn’t shy away from showing the dark side of that age like racism, inequality, imperialism and nationalism. Even if you slept through all your history classes, Space 1889, gives you enough information to “get” this era. The super power of that time is definitely the British Empire, so it’s no surprise it’s described in more depth than other major nations like Germany, Austria-Hungary, the Social Democrat Republic of France, the USA and CSA (yes, the Confederate States still exist) or more remote regions of the Earth.

The other planets and our moon get the same treatment. Of course including everything there is to know about a planet like Mars or Venus would be beyond the scope of a core rule book, but nevertheless there’s enough information for the players and GM to easily run adventures anywhere in the solar system. Even if you are not too fond of the Ubiquity system, this edition of Space 1889 is definitely worth it for the setting alone!

The rules system used in Space 1889 is the Ubiquity System which was created by Exile Game Studio for their pulp roleplaying game Hollow Earth Expedition. Ubiquity uses a simple dice pool mechanic for task resolution. Each die that comes up with an even number is a success. This allows you to basically use every kind of die you own, as long as it has an even number of faces. The GM decides how many successes are needed for the action to be successful. Easy actions need one success, almost impossible actions need 6 or more successes. The dice pool is calculated by adding the skill value and the relevant attribute together. The dice pool can then be further modified depending on circumstances and gear used. For example if you have access to good tools you can add +4 to your dice pool.

Space 1889 also uses a meta game currency called Style points which can be awarded by the GM for good roleplaying, giving in to a character’s fault etc. These points can then be used to buy additional dice or reduce damage. They can even be traded among characters within certain limitations. An interesting mechanic are risk dice. When you run out of Style dice but get into a tricky situation you can add risk dice to your pool! But beware, every two risk dice add the difficulty by one. In my opinion the Style points and the risk dice mechanic are a great way to simulate the over-the-top attitude of the genre and are a great fit to Space 1889.

The combat rules are a bit more elaborate than the rest of the rules, but that’s not uncommon in roleplaying games. But overall the rules are what I would consider rules-light, perhaps on the edge to rules-medium. If you prefer you combats descriptive and cinematic, you probably can handwave a lot, but the rules also allow a more tactical combat. There are also detailed rules on non-combat hazards, like the vacuum of space, poisons, diseases etc.

The chapter on equipment is quite extensive and contains everything from a simple knife to a land juggernaut or an ether flyer.  Aside from the more common equipment the chapter also lists various “triumphs of science” like a mechanical men, artificial gills or ancient Martian artifacts. Last but not least Space 1889 contains a long list of inspirational material, a glossary, and an extensive index, followed by a two-paged character sheet.

What I really love about the new Space 1889 is that it feels “complete”. You can get the book, read it and then start playing without having to buy additional sourcebooks or bestiaries. The core book contains everything needed to get started. That’s always a big plus in my book. The Ubiquity rules are – in my humble opinion – a perfect fit for the genre and are pretty easy to learn. The background itself is a classic. Space 1889 is now almost 25 years old and feels as awesome as it felt back then. I don’t mind the few tweaks they made to the original setting, and if you don’t like them, you can easily retcon things. Space 1889 is definitely a must-have for fans of the originals or gamers who are looking for a different take on the steampunk genre. You can find more information on the upcoming English edition on the Kickstarter page!

So what are you thinking about the upcoming Space 1889? Have you already backed the KS? Or do you even own the German edition? Please share your comments below!