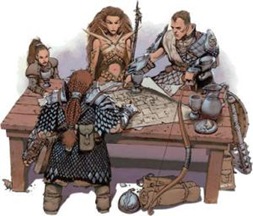 A while ago two of my friends and I sat together to talk about our upcoming Fate Accelerated game. We all had different ideas about what we’d like to play. Several ideas were thrown around. We basically discussed everything from a game based on the Nickelodeon show Legend of Korra to a campaign set in the Mass Effect universe.

Eventually we settled for a campaign set into a world which has gone through an industrial revolution several years ago. Magic exists in the world and magic users have been the rulers of a vast empire for ages, but recently their influence is waning. After we had settled on this premise we talked about the elements we wanted to see in the campaign.

Pretty early on we made the decision to focus on one big city first. This allows the gamemaster and the players to flesh out the rest of the world step-by-step later. We also came up with the idea that there should be a dichotomy between magic and technology much like in the computer game Arcanum: Of Steamworks and Magicks Obscura. My friends quickly came up with early concepts for their characters and I was given the task to flesh out our collected ideas into a more concrete setting.

So I took what we have talked about, added my own spin, and eventually created the city of Skalica (I borrowed the name from a Slovakian town). It was one of the centers of the age-old and mage-ruled empire which is now controlled by a council of elected representatives after the people raised up against their mage masters. The setting is rife with conflict: magic vs. technology, mages vs. mundanes, rich industrialists vs. poor workers, etc.

I intentionally left everything else pretty vague. In my opinion one of the strength of the Fate system is that it easily allows players to bring in their own ideas and expand on the setting during play. Focusing on a small area first and then later flesh out the details is a pretty new approach to me. Usually I love to create whole worlds, dozens of nations, with long histories. This time we decided to keep things small and I think this is an approach I’ll follow more often in the future. Planning everything beforehand can easily be overwhelming and actually limit your options. Imagine you want to add a new aspect to the setting you haven’t thought about until then. If the campaign world is already fleshed out to the tiniest detail, you might have trouble to fit it in. But if you focus on a small area first, there’s always more than enough space to expand into. Who knows what’s behind the next hill?

So what’s your approach to campaign design? Do you like to plan everything beforehand or do you prefer to start small and then slowly expand when needed? Please share your thoughts below!