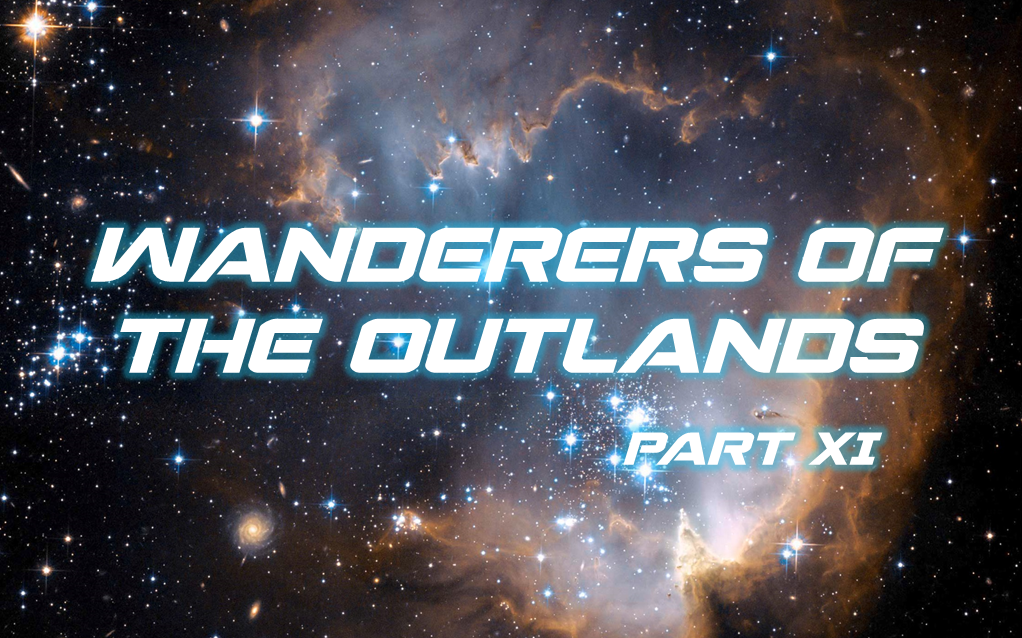 Week 11, if you just joined us this is my weekly series detailing my new Savage Worlds sci-fi campaign. This is the link to last week’s post.

This week we delve into the Timeline. I first wrote a general history, more a sweeping narration than a specific list of dates that you can find in this post. As I continued writing I felt the need to nail down some dates and actually give some context to what happened to get humanity here. I need to give thanks to my dear friends Michael, aka Stargazer, and Sara Ivette (who is a contributor at PR-Gamer), both gave me excellent feedback and all their suggestions were integrated into the timeline.

XIV.  A timeline of humanity’s conquest of the stars (Part 1)

Early 2087 ME (Modern Era) – The Big Crash, the collapse of the world economy and the end of Asia-Pacific economic supremacy

Late 2087 ME – Toppling of Old Empires, the breakdown of the Chinese estate into many smaller nations, marks the beginning of a series of conflicts that last eleven years and will eventually be known as the Asia-Pacific Wars.

2089 ME – Formation of the Eire Union, after Wales breaks away from the United Kingdom, it joins the nations of Scotland, Northern Ireland and Ireland in a new political union that becomes a major political power in Europe. Great Britain opposes the formation of the new union, but it is effectively crippled when a terrorist detonates a tactical nuclear device in London.

Early 2090 ME – To cope with the growing economic power of the Eire Union, the European Union liberalizes many of its economic policies, granting many new powers to corporations within member nations.  The financial sector becomes more influential than the people and many individual liberties are lost in the process.

Mid 2090 ME – After a brief non-nuclear war with Pakistan, India annexes their former enemy and integrates Afghanistan into a new political entity known as the Hindustan Conglomerate. The fledgling Russian Alliance crumbles as it loses access to Afghan and Pakistani markets.

Late 2090 ME – Nippon extends aid and protection to the Korean Alliance and the Northern Free States of China and while no political assimilation occurs, the new economic alliance becomes known as the Nippon Sphere

Early 2091 ME – Turkey joins the European Union, the first Islamic nation, paving the way for most Middle Eastern countries and many Northern Africa nations to join the EU over the next two years

Late 2091 ME – Formation of the Eire-Indo-Nippon Block, a strategic alliance between the Erie Union, the Hindustan Conglomerate and the Nippon Sphere

2092 ME – Under the pretense of internal security and border protection, the United States of America annexes Mexico and Canada and creates the Union of North American States. Mexico, ravaged by the Narco-Wars, its government on the verge of economic collapse, acquiesces to the annexation as funds and security forces pour into its formerly sovereign territory. Canada resists the annexation without success, but the Quebec resistance holds out for almost a decade before being quelled. In South America, as a response to US aggression and spearheaded by Argentina and Brazil most nations join the Brazil-Argentina League for mutual protection.

2093 ME – The European Union officially becomes the Mediterranean Union extending from continental Europe, through the Middle East and Northern Africa. The new institution is even more pro-corporation, the citizens lose more rights and many observers see fascistic undertones in the Union’s rhetoric. The Mediterranean Union establishes policy under which they declare large swaths of territory in the countries of the former Russian Alliance, even portions of Russia itself, under their sphere of protection. These nations are refused entry into the Mediterranean Union, but its pro-corporate policies are extended there, sometimes even against the laws of these sovereign states.

2095 ME – Publication of Professor Wei Chavez Wong’s book, A Workers Paradise, a reconceptualization of Socialist and Communist paradigms and a counter proposal to the corporatist ideals of the Mediterranean Union.

2096 ME – Russia and its neighbors, suffering under the yoke of the policies of the Mediterranean Union revolt, and after a short and bloody conflict that includes large nuclear and bacteriological attacks known as the Slavic Revolt, form the New Soviet Union.

2098 ME – The Indonesian Armistice is signed, marking the end of the Asia-Pacific Wars, most of the nations of the region, with the exception of Hindustan, Western Mongolia and the Nippon Sphere, have crippled economies and devastated infrastructures as a result the war.

2099 to 2112 ME – The New Cold War, the nations of old Earth enter a period of reconstruction, breakdown of diplomacy between many political and economic blocks and a resulting arms race, including limited space exploration of the Solar System

Early 2113 ME – The First Gen-Plague spreads across Europe, the Middle East and Northern Africa, remnants of the bio-weapons of the Slavic Revolt, terrorist activity and ongoing border skirmishes with the Mediterranean Union.

Mid 2113 ME – A large quarantine perimeter is established around Continental Europe, as far as Finland, Poland and Ukraine, the Middle East and Northern Africa as far south as Mali-Sudanese Union border.

Late 2113 ME – With the majority of the world’s oil reserves lost to the quarantine, the Eire-Indo-Nippon Block investments into alternate energy sources makes them the pre-eminent economic block in old Earth.

2114 ME – With an influx of immigrants from the still recovering Pacific nations’ longtime enemies, the Union of North American States and the Brazil-Argentina League establish cooperation agreements to manage the mass migration. The policies bring the two blocks together and their economies profit. By the end of the year both political blocks merge into the American Alliance to counter the power of the Eire-Indo-Nippon Block, but remain second fiddle to the EIN.

2116 ME – The Eire-Indo-Nippon Block begins a concerted effort to colonize other planets in the Solar System and establish the first space elevator, with three others to follow in the next two years.

2120 ME – The Second Gen Plague sweeps across the quarantined countries, spreading into all of Africa, the Siberian Plains, and almost reaching Hindustan, which clamps down its border with the help of other members of the Eire-Indo-Nippon Block.

2121 to 2122 ME – Mass migrations from the still recovering Asia-Pacific nations into the American Alliance increase threefold, as fear of the spread of the Gen Plague sweeps across the globe.

2128 ME – With the world population reduced by 25% as a result of the Gen Plagues, the Eire-Indo-Nippon Block and the American Alliance dedicate all their resources to finding a cure to the constantly mutating pathogens decimating humankind.

2132 ME – With Eire-Indo-Nippon Block colonies in Luna and energy collector satellites in the orbit of Venus, the American Alliance enters the space race with their first space elevator and a colonization mission to Mars.

2143 ME – The massive treatment of the populations afflicted by the Gen Plagues is declared a success; the blockades of the afflicted regions of old Earth are lifted and a massive reconstruction project begins.

2155 ME – By this year, the majority of those recruited to work in the exploration and colonization of the Solar System come from the nations that suffered the ravages of the Gen Plagues, as opportunities for them are lacking despite the reconstruction programs.

2191 ME – After various false starts, the first generation ship leaves the Solar System in a mission to reach Proxima Centauri.

2216 ME – The American Alliance loses two ships of their third generation ship fleet as they leave the farthest reaches of the Solar System. There is suspicion that there might have been intervention from entities external to the Solar System based on the ships’ last communications, but no conclusive evidence is available, and the general population does not learn of this until years later.

That’s the end of part 1, next week humanity makes first contact and leaves the Solar System and travels to the stars! See you then.