Recently a couple of fellow bloggers had the opportunity to look at Monte Cook Games upcoming Cypher System Rulebook. Since I wasn’t among the lucky ones, I got in touch with Shanna Germain and she was nice enough to tell me who to contact. And lo and behold, a couple of hours later, I had the PDF in my Monte Cook Games store account. Excitement ensued!

So what’s the Cypher System? The Cypher System is the rules system powering both Numenera and The Strange. The Cypher System Rulebook is a variant of those rules designed to fit various genres. With this book you can play games in the Modern age (with or without supernatural elements) or in the Science Fiction, Superhero, Fantasy, and Horror genres.

Overall the book is gorgeous. As with the other Monte Cook Games products’ it has a clear and easy-to-read layout and awesome artwork. I can’t wait to get the printed version as soon as it hits the shelves! The PDF contains 416 pages, so the hardcover book will be a veritable  tome. Since it contains no setting information it’s all rules. But don’t fret, the actual rules are only a couple of pages. The rest of the book focuses on how to run the game and contains countless foci, descriptors, and cyphers.

A character in the Cypher System can be described by a short sentence i.e. “I am a Strong Warrior Who Wields Two Weapons At Once”. Strong is the Descriptor, Warrior is the character type (there are also Explorers, Adepts and Speakers), and Wields Two Weapons At Once is the Focus. In addition to that the Cypher System also has Flavors which allow to give your character a certain spin. A Warrior with a Magic flavor is quite different from a Warrior with a stealth flavor for example. This makes character creation in the Cypher System more flexible than ever. I don’t want to go into too much detail here, because I don’t want to spoil everything and the post is probably going to be pretty long even without it. 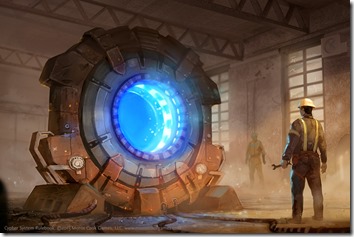 What also differentiates the Cypher System from other systems is that the three attributes Might, Speed, and Intellect are not a measure of how good your character is in these categories. When both a character with Might 10 and another with Might 20 try to force open a locked door, they both roll an unmodified d20. The difficulty level is the same for both, but what gives the second character the egde he needs? That’s where Effort and Edge come in. Each character has an Might edge, Speed edge and Intellect edge value. Whenever you want to push your character to it’s limits, you use Effort. By paying 3 points from the respective attribute, you can lower the difficulty of the task by one level. The Edge value is subtracted from that cost. So the higher your Edge, using Effort becomes easier. More experienced characters can do this several times per. So the character with Might 20 doesn’t get as easily exhausted as the one with Might 10.

The attributes also double as your hitpoints. Getting shot reduces from your might pool, using supernatural abilities subtracts points from your intellect pool and poisons etc. might hurt your speed. If one of your attributes gets depleted, the damage jumps to the next and all difficulty levels are raised by one for the character until healed. 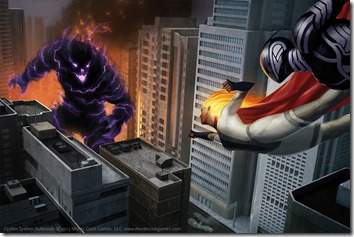 But enough about the rules. Let’s have a look at what else the book has to offer. As I wrote before, the system supports the Modern, Horror, Science Fiction, and Superhero genres. In the book you get tips on how to run games in the various genres using the Cypher System and each genre has a list of fitting foci. But of course you can pick any focus if it fits your game and some of the foci from Numenera and The Strange may also be a good fit for the setting you want to play in. The rules also encourage GMs to come up with their own descriptors and foci.

The book also contains an extensive bestiary and a long list of NPCs fitting the various genres. Alas it feels a bit short but that’s probably because they had to split the available space between various genres. A few of the creatures from Numenera and The Strange make a comeback in this book, but there are also a lot of new monsters. There are also a couple of creatures from H.P. Lovecraft’s Cthulhu mythos included, so you could basically play Lovecraftian horror with the Cypher System.

Each chapter on the various genres has some special rules. The horror genre has rules for madness, the superhero genre has rules for power shifts and so on. These rules are optional and can help to further customize how the system works in your game. I guess it should also easily be possible to mix and match genres and combine rules from the various chapters. Who wouldn’t want to play in a superhero-horror campaign?

I could go on for ages, but I guess I should come to the end of my preview. I haven’t had the time to delve too deeply into the book, but from what I’ve seen so far it’s what I’ve been waiting for! The changes made to the system make it much, much easier to run games in almost any genre using the awesome rules from Numenera and The Strange. Of course switching from D&D to Fantasy Cypher will change the tone of the game tremendously, but I guess you could still play in your D&D world just with different rules. But in my opinion it probably makes more sense to come up with your own settings which take advantage of what the system offers. 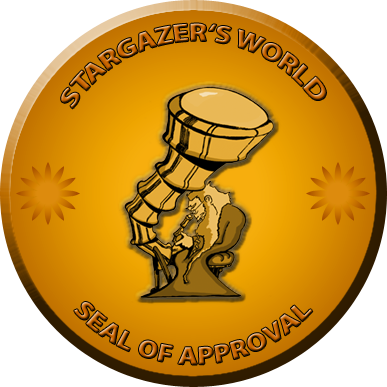 I wholeheartedly recommend to anyone picking up the Cypher System Rulebook as soon as it comes out later this year. And if you can’t wait that long, you can already preorder it from Monte Cook Games or DriveThruRPG.