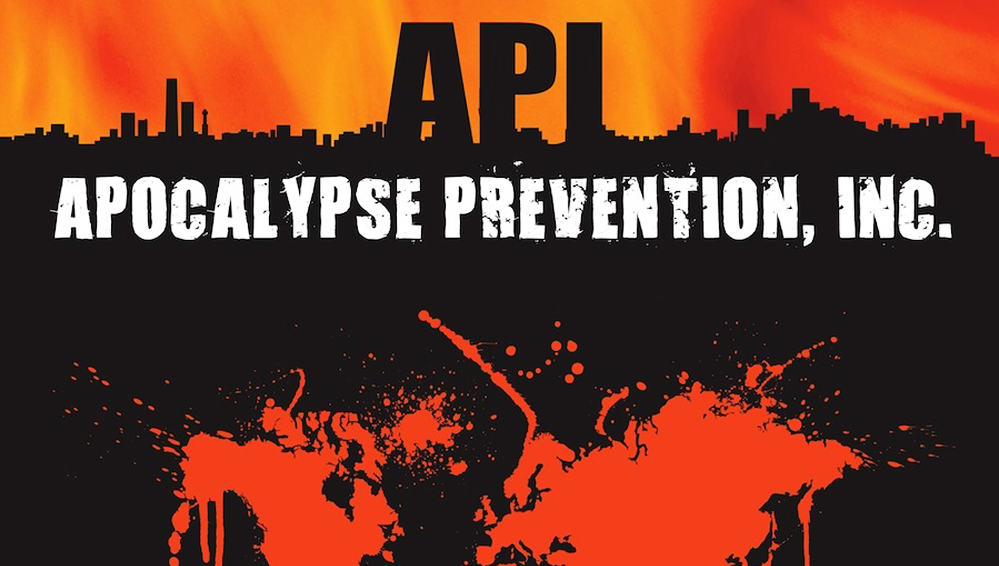 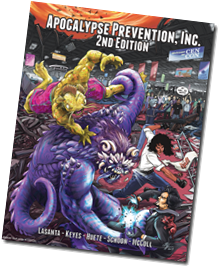 Back in 2011 Eloy Lasanta of Third Eye Games graciously provided me with a review copy of his roleplaying game Apocalypse Prevention Inc. Recently he released a 2nd edition of his game, so he asked me to have a second look.  You can check out my review of the first edition here.

The first thing you’ll notice is that the 2nd edition of API is a much better looking book (or PDF in the case of the digital edition). The cover artwork gives you a great impression of what the game is all about. In API you play the hard-working employees of the Apocalypse Prevention Inc., the only organization standing between us and impending doom in a world where the supernatural is a thing. Think of Men in Black but with the supernatural instead of aliens. The other thing the game has in common with MiB is the humor. API doesn’t take itself too seriously. Yes, there can be horror, but it is always contrasted by some tongue-in-cheek humor. 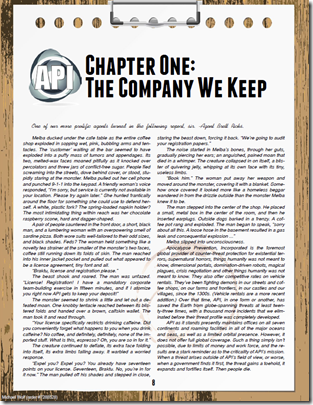 The layout of the 231-paged PDF is a small improvement over the 1st edition. The “faux clipboard” look works pretty well in my opinion. The artwork is pretty nice too and was obviously created by the same artists as in the previous edition. At first I thought a couple of images were reused, but on a second look I noticed that it’s actually all new artwork especially created for this edition.

I have to admit I haven’t had the time to give everything a closer look, but I noticed a couple of changes from the 1st edition. The most obvious addition are the new races. Players get to choose from a couple of new races including (but not limited to) the dragon-like Draconi, Hunchbacks, the devilish Inciters, the slimy Mucks, and the metallic Synchrons.

Skills have been overhauled as well. Fighting skills have been included in the general skill list and some skills have been combined into new ones. While I was leafing through the book I got the impression that the 2nd edition is a bit lighter and more streamlined than the 1st edition. 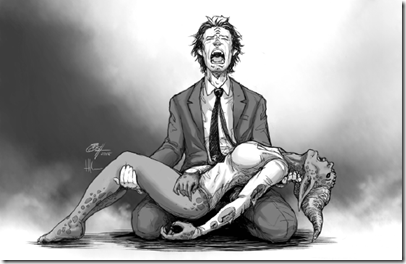 But don’t get me wrong, API’s mechanics are still pretty crunchy and especially combat offers a huge amount of options. Overall the game seems to be all about providing players with a lot of interesting options. The number of playable races is quite huge, there are countless gifts and drawbacks that allow you to further customize your characters and in addition to that the game has pretty large sections on Fighting Styles, Cyberware, and Magic.

Having that many options also means that you can easily use API 2nd edition to run games in different setting. You don’t like some of the races? Just throw them out! You prefer a cyberpunk game with no magic? No problem! Even though the game mixes horror and comedy, you can probably focus on the one or the other.

So is API 2nd Edition worth you money? If you already own the 1st edition and liked it, I’m pretty sure you’ll love the new edition. The rules have been overhauled and there are a lot of new options. It’s also easier on the eyes as well. If you haven’t checked out API at all, I recommend giving API 2nd edition a closer look.

The PDF version of Apocalypse Prevention Inc. 2nd Edition is available through DriveThruRPG and sets you back $14.99.

Someone is stealing our stuff!