Lazy Saturday post! We continue with the #RPGaDay2015 Challenge and we are venturing outside the realm of tabletop games and discussing about their appearance in other media.

Day 8 – Favorite appearance of RPGs in the media

Bear with me, this is going to be somewhat controversial. There are good appearances of RPG in other media, for example the RPG scene in the movie E.T. the Extra-Terrestrial, ot the recent YouTube Series Titansgrave. And then there are bad appearances, such as Mazes & Monsters, or the razy 60 Minutes piece on D&D and all the 80s fears! While I’m sure that paranoia affected some people negatively, parents refusing to let them play, or destroying their books, Oscar Wilde said it best, “The only thing worse than being talked about is not being talked about.”

With that being said, my favorite appearance of RPGs in medias is, Dark Dungeons. 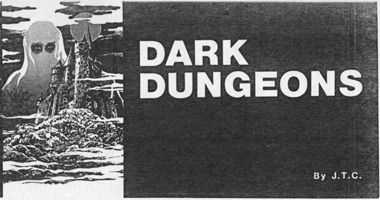 Bear with me and allow me to explain. The little religious tract was meant as an attack on role-playing and the perceived evils in the eyes of extremist fundamentalist religious nuts! But the whole thing is so ludicrous, so comical, it has spawned so many parodies, even a movie, that it’s become iconic in my mind, and is a well that doesn’t seem to dry up. Without that little tract, we wouldn’t have gems like these:

Dark Dungeons the Movie, not perfect, but I just couldn’t stop laughing…

I truly believe the paranoia and fears so common back then, and so clearly expressed in that pamphlet, meant that fans of the hobby had to engage in conversation, we had to know how to debunk those arguments and defend our hobby against baseless attacks, I really think we turned a negative into a positive. Dark Dungeons gives us a platform to address those concerns and speak to the truth of our hobby.  Some of those fears persist, but by and large, the concept of RPGs has entered the mainstream and that ultimately is a positive thing!

What do you think? Agree? Disagree? Let me know! See you all tomorrow…