Dear reader, let’s start out with two apologies… First I’m sorry to be posting this later than our usual hour; real life catches up with you in all sorts of funny ways. In my case it’s my ongoing battle with gravity. I fell Saturday and ended up having to go to the doctor yesterday. This got me behind on my writing schedule, but I’m respecting the sanctity of #RPGaDay 2016 and this is going to be posted before the day is over in my time zone. The other apology has to do with the typo in the featured image in yesterday’s post. A grater, i.e. a device for grating cheese, had nothing to do with the title of the post, I meant greater! It’s corrected now.

Also, on the RPG a Day Facebook page, I saw a repost from the BrigadeCon, where they shared the link to RPGaDay.com, quoting from the post they explain: “This wonderful website queries all #RPGaDAY hashtags and consolidates them for easy review.” Check it out!

Now on to today’s topic…

August 10: What was the largest in-game surprise you have experienced?

There are many stories I could tell, and I love when my player’s surprise me. I’m going to focus on two stories which I’m fond of, one from the perspective of a Game Master, another from that of a player. Let’s tackle the largest in-game surprise as a player first.

This was back in the early 1990s, we were playing AD&D 2nd edition, and my friend José Bellavista was the GM. I was playing the party’s cleric and we had learned of a dragon terrorizing a settlement. We investigated and found out a red dragon lived in the nearby ruins, so we prepared for the fight, I got all my fire protection spells ready and cast them, we went up to the creature’s lair, and with undue bravado and awfully sure of his spell’s protection, my cleric faced the creature! Only to be in the receiving end of an icy breath weapon! With my hit points dwindling I had to retreat to cast some healing spells. We defeated the creature eventually, only to later learn the dragon had used either Change Self or Alter Self (I can’t remember now) to modify the color of its scales and fool its enemies. Quiet clever, and quiet unexpected at that time! 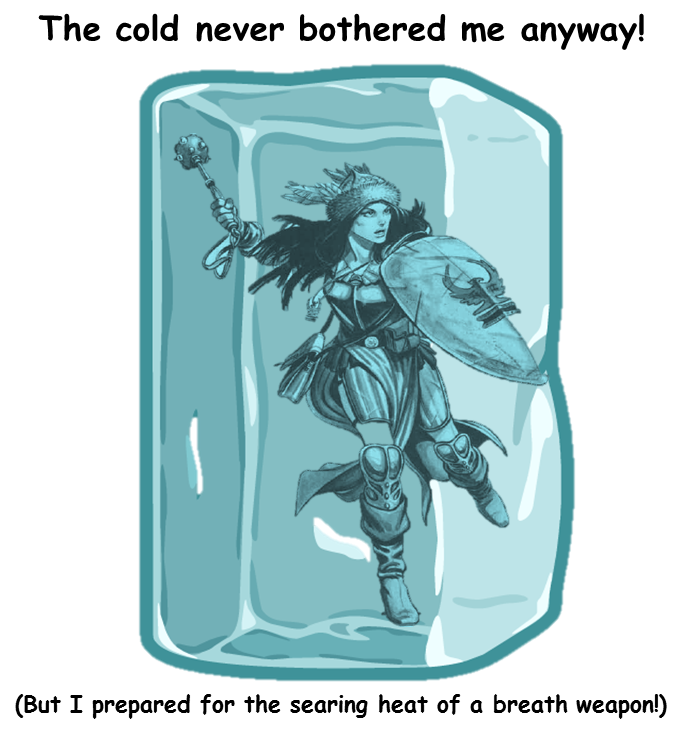 As a Game Master, this was done by the same player I talked about on day 4, Luis Alvarado. But first, context for the story; I’m not sure where I first read about the concept of the cutaway, a brief narrative you tell the players to give some context for what’s going on in the game, usually occurring at a time or place where they are not located at. It’s typically out of character knowledge meant to enrich the story, and it can work, if used well, and sparingly. I associate it with West End Games’ Star Wars D6 game in my mind, but I’m not totally sure that’s where I got it from. At one point in my development as a GM I was quiet enamored with the tool, frankly overusing it to the point where some of my players would roll their eyes when I said “Cutaway!”

However, this time around as my last AD&D 2nd edition campaign was coming to a close, I did a cutaway to one of the players’ major antagonists rallying his troops at that very same moment. Just as I was getting into my little narration Luis Alvarado interrupted me very politely, said he had the scrying spell to locate this guy, cast it, found him, teleported to where he was, killed him, and teleported back to safety. All the other players cheered and Luis became known as the player who broke my cutaway. It was totally unexpected and a lot of fun.

Those two are two of the largest in-game surprises of the many that have occurred at my table, what are yours? Let us know in the comments or share your posts so we can read your responses to this and other topics. See you all tomorrow.

Before I go, a link to one of the genius Monty Python sketches that inspired today’s title:

Interview with the authors of RAG