To quote Morrison, “this is the end, beautiful friend; this is the end, my only friend, the end…” And that sound ominous, but don’t take it as such. This has been a joyous month, getting back to writing in the blog, in many ways getting in contact with friends I had not talked to in a while. Becoming more active on G+ and Twitter again! It feels like a new start. I hope it can translate all this into more regular postings; I have a couple of topics I want to tackle over the coming weeks. However, I’ll be silent for a few days after this last post. Today I begin a much needed (but short) vacation and tomorrow Nilda and I will get married. It’s a small ceremony with close family and friends.

We decided to do this as part of a trip we had planned already and although we can’t have all our friends there, we’ll have a get together when we come back to Puerto Rico to share the happiness with everyone. That’s sort of what I hope to do with sharing the news here. Michael, aka Stargazer, opened his blog to me, gave me a place to share my thought, and in the process became one of my dearest friends. I wish I could have him there at the wedding, or at the very least at the dinner afterwards when we come back! By the same token, the community of readers here in the blog was very welcoming, and here and through social media, I feel I’ve made so many new friends that I really wanted to share the news with all of you! Thanks for reading, thanks for hanging around through our dry spells. Next time you read me I’ll be a married blogger.

Now on to the topic at hand…

August 31: What is the best piece of advice you were ever given for your game of choice?

Amazingly the best advice I got for my game of choice, but in fact applicable to ALL RPGs I play, came from my mom. She’s a very special lady, excuse me if I say so myself! Smart, energetic, a dedicated educator, a passionate teacher, an inspiring leader, I am all that I am today, in no small measure, thanks to her most of all. I can only aspire to be half as great as she is and I’d be a success!

However she has zero interest in games and most fantasy or science fiction. It had to be hard putting up with this geek growing up! I know she took me to movies she had no interest in seeing, played board games she had no desire to play, and for that I am eternally grateful. She studied psychology originally and then education, and while I’m not a fan, she loves self-help books, she read many, along with books on education theories, sexual education (she was a sex educator), investments, dieting (a constant in both our lives!) and many other subjects. The name of this post in fact comes from a self-help book by Richard Carlson. I never read it, but it has to do with the advice I got from her.

I don’t know if those were her word exactly, but they do sum up well what she said to me, don’t sweat the small stuff. I used to be really passionate about the game. In many ways I still am, but back then it was not for the best. If a game didn’t go as planned I’d sulk and brood over it. Over analyzing and being overtly critical for the slightest things. I think she saw me in a funk one time and asked me about it and I told her about some game or another. She didn’t laugh, she could have, and she didn’t dismiss the game because she knew it was important to me. She listened intently, and then she hugged me and told me not to worry too much, that it was after all a game, that games were supposed to be fun. If all I ever did after a game was worry about it, then it would be no fun. She told me that my friends were my friends not because of the game, but because of who we were together, and that everything was going to be all right.

You know what? It didn’t sink in! I still brooded about it. It took some time for me to realize the wisdom in her words but I still live by them and repeat that very same advice to other gamers whenever can. Don’t over analyze it, don’t worry too much, the game is supposed to be fun and that you have fun is paramount. So thank you mom, not just for this advice, but for everything you’ve taught me through the years!

And with that RPG a Day 2016 comes to a close! What was the best advice you ever received for your game? Let us know in the comments.

But, before I go allow me to plug the next geeknic for Puerto Rico Role Players, our 20th, and to keep it topical, we call it Make Geeeknics Great Again! The name was suggested by a friend, and while I was a little worried at making a joke about a serious topic as such a pivotal election in the USA, the name was selected in jest, and meant as such, it is not an endorsement or support of anyone’s political views. It will be held September the 25th in the Guavate Recreational Area. If you know anyone from Puerto Rico who might be interested please share the information, or you can follow the Puerto Rico Role Players Twitter account for more information! 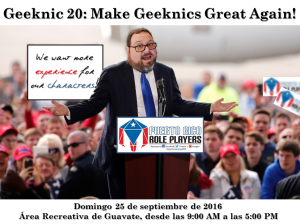 I’ll be gone for a couple of days, but I shall be back in after the 12th of September. See you all them.

Ask the readers: Does not play well with others…

Ask The Readers: Can I use the Kindle as a GM tool?