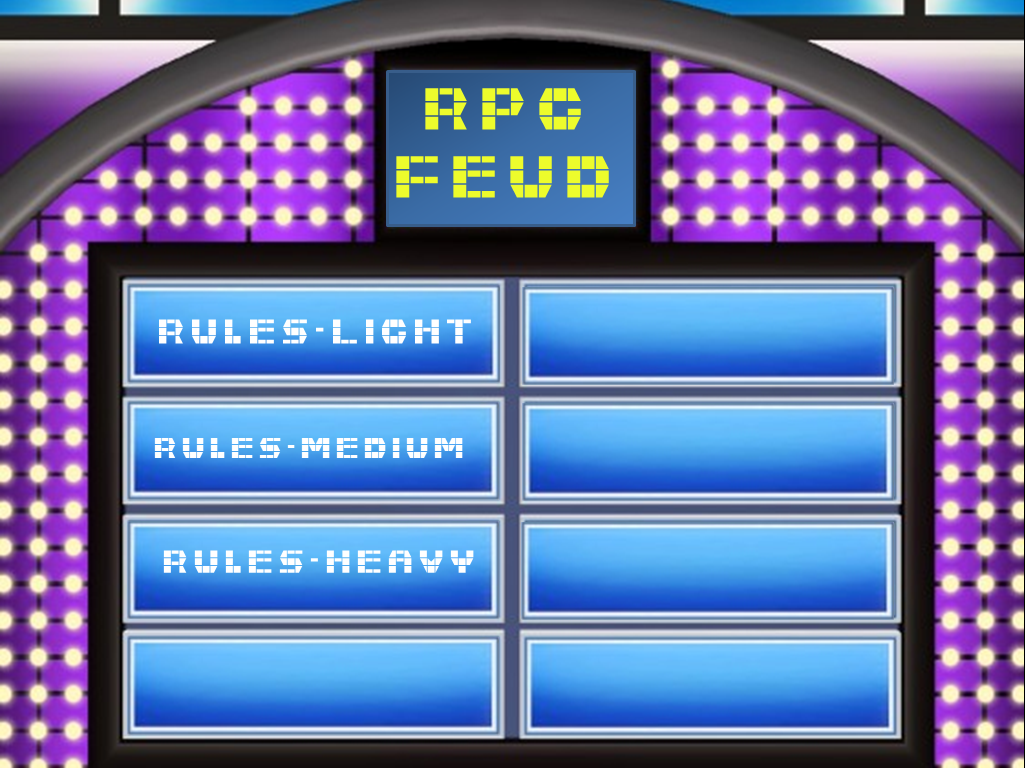 Twenty days ago I was having a conversation with friends over game complexity. The specifics of the conversation are unimportant, but the arguments were mainly whether people prefer a robust complex system with lots of options despite the complexity, or whether people would rather have a simpler system, even if that means fewer choices in mechanics, but that is easier to pick up and play. I had a feeling that while complex systems have their hardcore fans and familiarity lowers the difficulty to pick up newer versions of games even if they increase in complexity, when given the choice people choose simple over complex. So to get a feeling about the opinions of other role-players out there, I created a survey online and shared it on Facebook and Twitter to find out!

Michael was kind enough to write a post about it, and many of my friends and acquaintances shared the link on social media. To all of you, a hearty thanks! The survey was shirt, just one question, with three choices. The question and answers were as follows:

Question: What type of tabletop role-playing rule system do you prefer? The definitions are of course subjective, and you may disagree with some classifications, but based on the options given please select your preference. Thank you!

The comments on the survey clearly showed the some respondents disagreed on the classification. Two respondents defended Rolemaster: “This is interesting as you put Rolemaster in the “Rules Heavy” category but the core rule concepts are very rules light and its modular design means you can play a very rules light version AND play ‘by the book’ rather than a house ruled version.” and “Your understanding of Rolemaster as rules heavy is a common misconception.”

In my granted limited contact with Rolemaster I found it to be far more complex than that, could be the people I played it with and the style they preferred, but to each and everyone his or her own. Here is the tricky spot, and where surveys like this muddy the waters, because whatever system we like the most, or learned to play with, often has a familiarity and ease of use for us others may not get. At least no one argues the Hero System or GURPS are rules light!

Incredibly there were also some people who confessed to playing D&D 5th edition, but missing D&D 3rd edition. Truly D&D 3rd edition, 3.5 and Pathfinder really have marked a style of play, with increasing complexity and choice, that grant the dedicated player the ability to customize characters but also brings great complexity to the table. In my opinion as much as I like the game, said complexity is a barrier of entry for new gamers, and D&D 5th edition dies offer a simpler play experience. But with a rule set that’s survived for 16 years (D&D 3rd edition, then 3.5 and now Pathfinder) the familiarity is there and I think it can keep on going as long as they have a big enough base. But I digress, what did the survey say?

Despite some respondents disagreeing with some classifications, with little over one hundred participants the results were as follows: 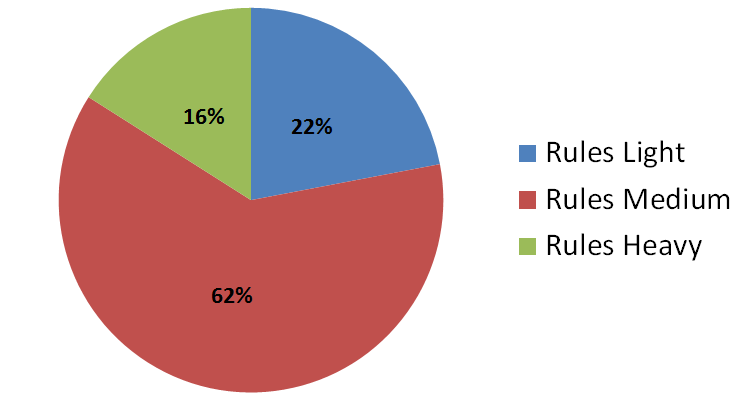 That’s and interesting divide. I expected far more people to be in the Rules Light category. Even if I myself would consider myself squarely between Rules-Medium and Heavy! I guess people can be on the fence! They want their options, not to simple, but not any complex trigonometry to go with character generation!

Showing my bias, there were some interesting categories of games I left off my defections. Someone left the following message (and I have a feeling I know who this person is): “My general preferred system is any kind of Powered by the Apocalypse game; I guess I’d classify those as Rules Medium.” Games Powered by the Apocalypse have a different paradigm. What about the Star wars games by FFG? Where do they fit? Burning Wheel? There is a growing diversity in game rules and styles of play, and that’s good. Of course more esoteric games have a more limited market.

Some of the other comments in the survey were:

From the data in the survey I think game designers should strive for games of medium complexity, perhaps with the built in ability to pick and choose options and scale the complexity to the user’s preference. With plenty of character options but ease of use for Game Masters; that’s my conclusion of this limited survey and my anecdotal experience. Am I right? Probably not 100%, but hey, it’s a start! What do you think?

PS – Don’t worry! I’m not writing this post from my honeymoon. Thanks to the magic of technology this post was written BEFORE I left and scheduled to go live today. We truly live in wonderful times.