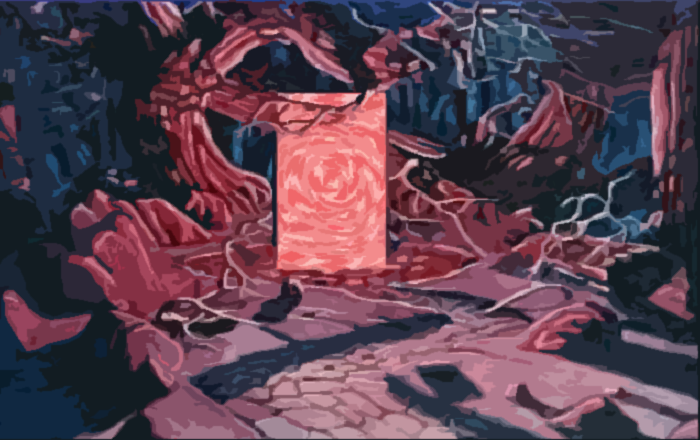 Yesterday evening I had the chance to run my first White Box game set into the world of the Ultima series, Britannia (or Sosaria as it was known before). Overall I have to say things went pretty well.

The player characters were all humans from Earth, who got lost in a renaissance faire and ended up in front of a gypsie’s wagon. The mysterious woman inside asked them 28 moral dilemmas which determined the characters’ professions.

Yes, I actually took the questions from the Ultima games to determine which Virtue was favored the most by the players. I could have reduced the number of questions if I asked each person seperately and then picked the questions more cleverly. But since I wanted to get the answers in one big swoop, they had to go through all 28. In the end we had a Paladin, a Druid, a Magic-User and Ranger.Since White Box only has the Cleric, Magic-User and Fighter as classes, I had to improvise a bit here. Especially at first level the classes don’t make such a huge different, so I used Cleric for Paladin and Druid, Magic-User for the Mage, and Elf (yes, Elf) for the Ranger. In the long run I planned to create custom classes anyway, but more to that in a moment.

After the players had answered their questions their character’s stumbled upon open moongates. They entered and where whisked away to Britannia, finding themselves lying on the ground close to Castle Britannia. They wore profession-appropriate garb and where equipped with fitting weapons. Yeah, I know, moongates don’t work that way, but I did it anyway.

The player characters assumed they stumbled into some kind of LARP, where complaining about the lack of cellphone reception and eventually started to search for anyone who could explain the situation. After a long walk they found Castle Britannia. The guards immediately noticed the strange mannerisms and speech of the player characters and sent them to Lord British’s throne room. He quickly recognized them as travelers from Earth, but they still thought they were in a LARP event. It took Lord British some explanations and a show of magic to convince them that they weren’t in Kansas anymore.

On the next morning the player characters overheard a conversation between two guards that an expected cart from Britain was overdue. So – mostly out of curiousity and the fact they had nothing better to do – they investigated. The march was accompanied by a lot of complaining (no one was used to long walks). Eventually a farmer with an ox cart came their way and he offered them a lift. This way of travel was not faster but definitely not as taxing as walking.

After a while they found the cart lying at the side of the road. One of the wheels was destroyed, scorched by fire (or magic). There was some blood and signs of a struggle. Two of the player character’s wanted to look for the missing drivers, while the others preferred to return to the castle and ask for help. Eventually the Mage and Ranger followed a trail they discovered leading into the woods and found a cave hidden behind some bushes. While they slowly entered weapons drawn, the rest of the party was getting nervous. Finally they decided to go look for their companions. So in the end, the whole party begrudingly explored a wet and dark cave. 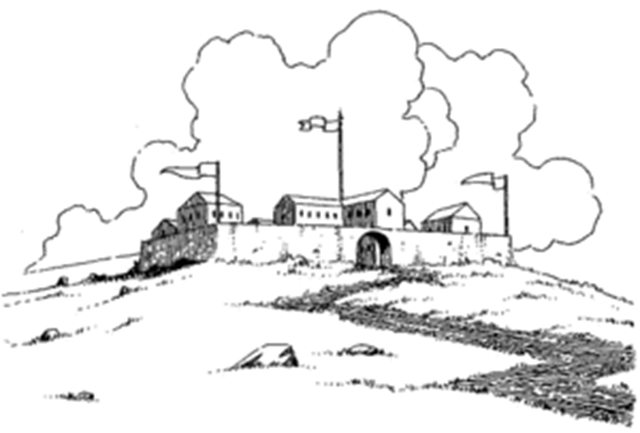 They found the wounded driver (the second one has obviously just been sacrificed) in a large cavern, in which a dark and robed figure conducted some weird rituals. The Ranger attacked the figure with a bow but the arrow went right through it. “Kill them”, the figure yelled and then it vanished into thin air. Then the bones lying scattered around the cave floor turned into animated skeletons which attacked the player characters. Making good use of turn undead and some well-placed attacks, they eventually overcame the abominations, and saved the last remaining driver, a guy called Norbert. His fellow driver, Ephraim, was definitely very dead, so they only could recover his corpse for a proper burial. The adventure ended with them returning the wounded driver to Castle Britannia, where Lord British healed their wounds. 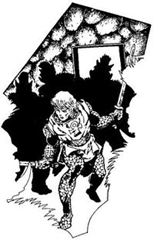 Overall I have to say everything went smoothly, the White Box rules worked very well and the players obviously enjoyed playing modern humans who suddenly found themselves in a fantasy world. But for the future I definitely need better fitting classes. Here comes Barrel Rider Games to their rescue. Their White Box Companion contains Paladin, Bard,  Druid, and Ranger as new classes. I can basically use them with no changes. Now I just need to find fitting classes for the Shepherd and Tinker professions. If one of my readers has any ideas, please post them below!

The only open issue which remains is the magic system. In Ultima there’s no distinction between arcane and divine magic. There’s a set of spells which is available to all. I could either just allow every spellcasting class pick spells from both the arcane and divine spell lists or create a completely new set of spells inspired by the ones from the computer games. Unfortunately I have no idea if this will mess with game balance too much. Again, if anyone has any advice, please share it below! I can need any help I can get, at the moment.