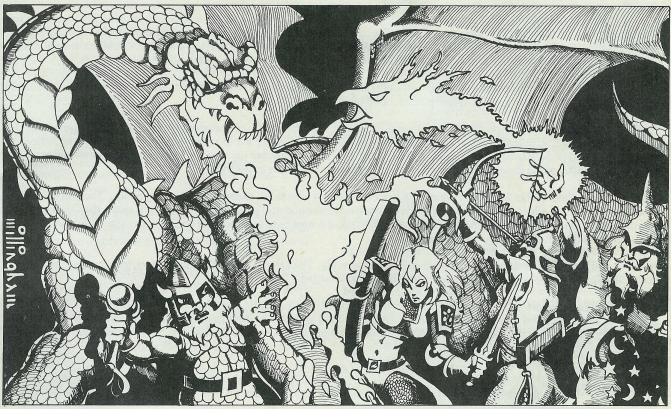 This Saturday we had to cancel or regular Titansgrave game, because three of the players couldn’t make it, so I pulled out White Box: Fantastic Medieval Adventure Game, and we quickly rolled up characters for the four players who could make it (yes, I have a pretty large gaming group). I offered the players to roll 3d6 six times and then distribute the results as they saw fit, but they decided to go all old-school and roll “3d6 in order”. This led to some pretty interesting character choices, like the highly-intelligent but not-so-wise cleric, or the all around mediocre fighter. But all these characters are actually pretty viable in a White Box game.

The session itself was 100% improvised. I randomly created a dungeon using some special dice my friend Marcus has brought with him. The world was made up on the spot and I used a lot of common tropes. The adventure started in a tavern, the “quest giver” was a mysterious robed figure, the dungeon was located under the destroyed tower of a wizard who had terrorized the whole area decades ago. It quickly became clear that we were all interested in a light-hearted game. Explaining some old-school concepts to the players I mentioned that the GM is basically God at the game table. So the player who rolled up the Cleric decided to worship St. Michael, a god clearly inspired by me.

One of the player characters fell asleep during watch, which allowed a lucky thief to almost rob them blank. Their unlucky streak continued when they got lost in the mountains and stumbled upon a basilisk. Only a couple of lucky rolls (and a mistake on the GM’s behalf) saved them from a TPK. Eventually they made it to the dungeon where they had to evade devious traps, face numerous skeletons and a pretty nasty Mimic. But in the end, they found the artifact they were paid to bring back.

What this session showed to me clearly is that White Box is a perfect pick-up-and-play kind of game. And if you’re not planning to start a serious campaign, you can easily improvise simple adventures. Because everyone knows the common D&D tropes, no long explanations are needed. The rules-light nature of White Box also has some issues. Mechanically the two thieves in the party were basically identical. This is not a big issue to me, but some more mechanically minded players might see this as a drawback.  White Box also makes it very easy to just handwave things away you don’t like, which is something you often don’t dare to do in crunchier systems. Someone really wants to use a sword as a Magic-User? Let him. If you go 100% old-school, all weapons cause the same damage anyway, so it’s mostly a cosmetic thing. Even if you use the damage values given in White Box: Fantastic Medieval Adventure Game, the difference between a sword and a staff is negligible.

Next week I’ll probably run something completely different, but White Box will definitely one of my go-to games in the future. By the way, my friend Marcus also wrote down his thoughts about Saturday’s game in a blog post. He focuses on the random character creation and it’s definitely worth a read!

Falling in Love with White Box