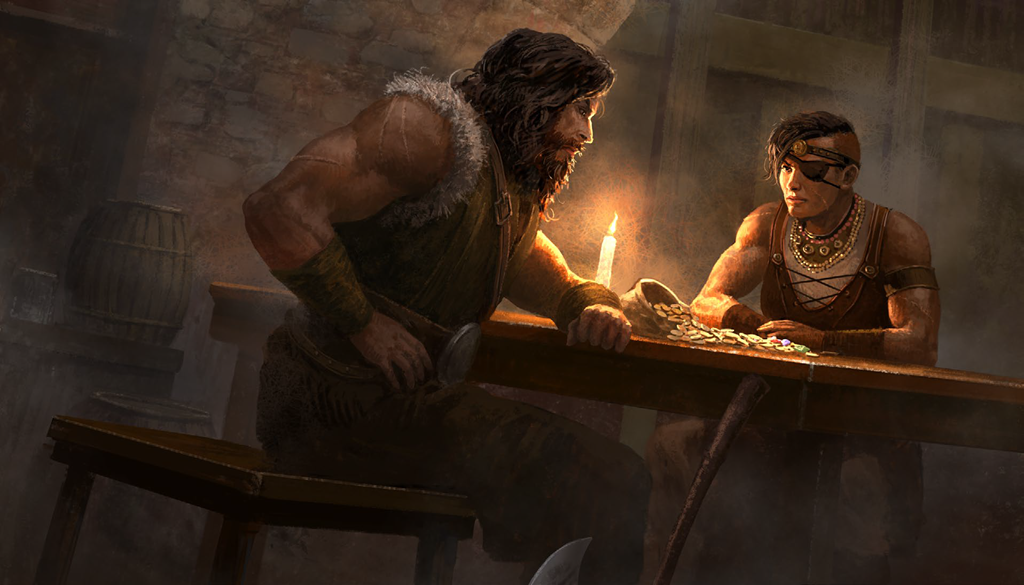 This is part two of my review of Modiphius’ Conan – Adventures in an Age Undreamed Of. Last time we mostly focused on the character generation and the rules in general. This time we tackle Skills and Talents, as well as Combat and Sorcery. 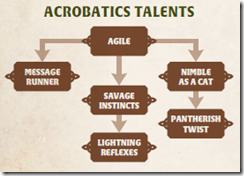 Let’s move on to skills and talents now. Conan includes a length list of skills including but not limited to Acrobatics, Command, Healing, Lore, Ranged Weapons, and Warcraft. Each skill grants the character access to a tree of relevant talents. You might know similar concepts from computer games. I also faintly remember that Exalted something pretty similar. These talents allow to further customize your character to your wishes even after character creation. I’ve included an example talent tree to the right. Tying talents to the various skills is definitely not a bad idea. It definitely helps players to find talents useful to them more quickly, because they just have to check those tied to their most important skills.

Talents are also where a lot of the depth of the game comes from. An experienced characters usually gets new options on what they can do with almost each talent (some just grant bonuses or make certain actions easier). I haven’t played the game yet, but I think that this may slow down the game tremendously if players have to weigh all their options each time they act – especially in combat. 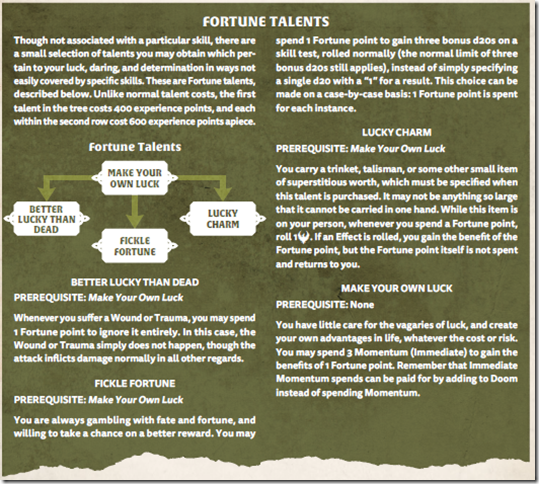 In the last part of this review I already talked about how checks in the 2d20 System work, I mentioned Momentum, and Doom. What I haven’t talked about are Combat Dice, which add another interesting element to the game’s mechanics. Combat Dice are regular d6, rolled to determine damage in combat or other special effects. A result of 1 counts as 1, 2 counts as 2, 3 and 4 counts a zero. 5 and 6 counts as 1 and may have additional effects if the character has a skill or item that grants special effects on a roll of 5+. Again, this sounds a bit confusing at first glance, but at the game table it works great. Rolling a bunch of d6 to determine damage is now a bit more exciting because of the possible additional effects that might occur.

Now let’s have a look at combat. In Conan the player characters always have the initiative. Wow, that’s quite the advantage. But the GM may use one of his Doom tokens to seize initiative for their NPCs. The order in which each individual player character acts is not determined by the rules. Instead the players decide the order themselves.

Distances in Conan are abstract. The range bands are Reach, Close, Medium, Long, and Extreme. Reach is basically at an arm’s length. Close is within the “zone” a character is in. A zone may be something like “behind the bar” or “in front of the high priest”. Medium range is the adjacent zone and so on. I like that. Especially when you’re not using any miniatures during combat, abstract ranges make a lot of sense. Your mileage may vary of course. 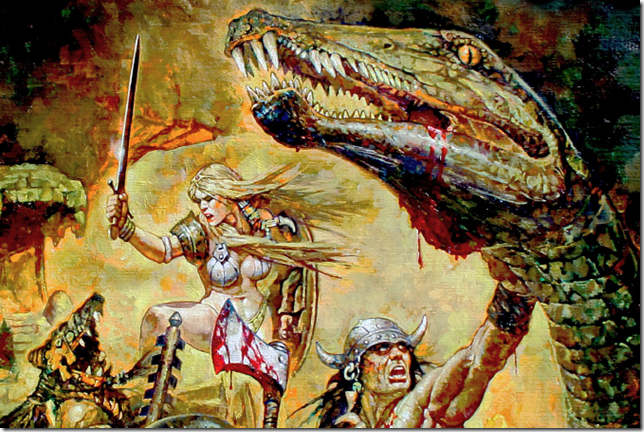 In combat Momentum is key. Each time a character attacks they might generate Momentum which can immediately be used to add additional combat dice to the damage caused. Momentum can also be used to break an opponent’s guard, do called shots, penetrate armor etc. The list of options is quite long which is IMHO great, but as I mentioned before migh slow down combat because players might take their time weighing their options. This is not necessary a bad thing, when you are enjoying this kind of gameplay. If you prefer quick combat in order to get back to exploration and roleplaying this might be a problem. But again, I haven’t seen Conan in play yet, so I might be wrong.

Conan like all 2d20 System games doesn’t use regular old hitpoints, but rather a system using Stress and Harm. Stress is much like hitpoints. The damage you suffer is subtracted from your Stress. As long as you don’t suffer too much damage in one stroke and your Stress is not depleted, you’re fine. This type of damage mostly consists of fatigue, scratches, a few bruises, perhaps a minor cut or two. Stress damage recovers immediately after the scene ends. 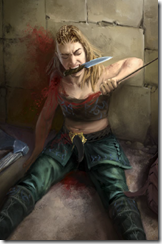 Harm on the other hand is more severe. If you take more than 5 points of damage in one attack, you take 1 Harm (Wound or Trauma). If you are also out of Stress you take 2 Harm instead. Armor reduces the damage taken. If a character suffers a Wound they may also sacrifice armor in order to ignore the Wound. Conan also has mental damage which is associated with a different track: Resolve. Harm associated with physical damage is called Wounds, while mental Harm is called Trauma. Each point of Harm taken increases the difficulty of all tasks involving physical or mental attributes respectively by one. If you take 5 Harm, you’re dead. Ouch!

This is a good opportunity to talk about Creature Categories in Conan. Like in most games there’s a distinction between cannon fodder opponents (Minions) and tougher enemies. Minions are easily vanquished. If they suffer one harm, they’re out. Toughened NPCs follow the same rules as player characters but are taken out by 2 Harms of the same kind (2 Wounds or 2 Trauma). Nemesis are basically on par with the player characters.

But enough about combat. Let’s have a look at Sorcery in the Hybrorean Age. As in any proper swords & sorcery setting, sorcery in Conan is rare, powerful, corrupting, and madness. Included in the Sorcery chapter is also alchemy, which is actually not magic, but is often considered as such by the ill-informed. Using the alchemist skill characters can create various exploding powders, burning liquids, reinforce fabric and so on. This also includes creating simple talismans.

Real Sorcery is performed by using the Sorcery skill which comes with its own set of talents. Eventually a sorcerer can achieve immortality by bartering away their precious soul. Sorcerers need Patron who grant them powers and not all of these patrons are interested in the well-being of their subjects. In order to cast a magic spell, characters have to focus (which is a minor action), followed by a Sorcery test. Because of the corrupting nature of magic, the GM may turn a normal Sorcery test into a Consequences test any time. In that case the spell works, but the successes rolled are needed to fend of dire consequences for the sorcerer. In game terms every unsuccessful die result counts as if the player had rolled a 20 on said die.

The spells themselves are usually pretty dark in themselves. Don’t expect something harmless like D&D’s magic missile. In Conan you use not-so-pleasant spells like Dismember and Enslave. Did I mention that there are also rules for human sacrifice? Sorcery is definitely not child’s play…

This concludes part two of my Conan – Adventures in an Age Undreamed Of review. Stay tuned for the last part which should go live any day now!