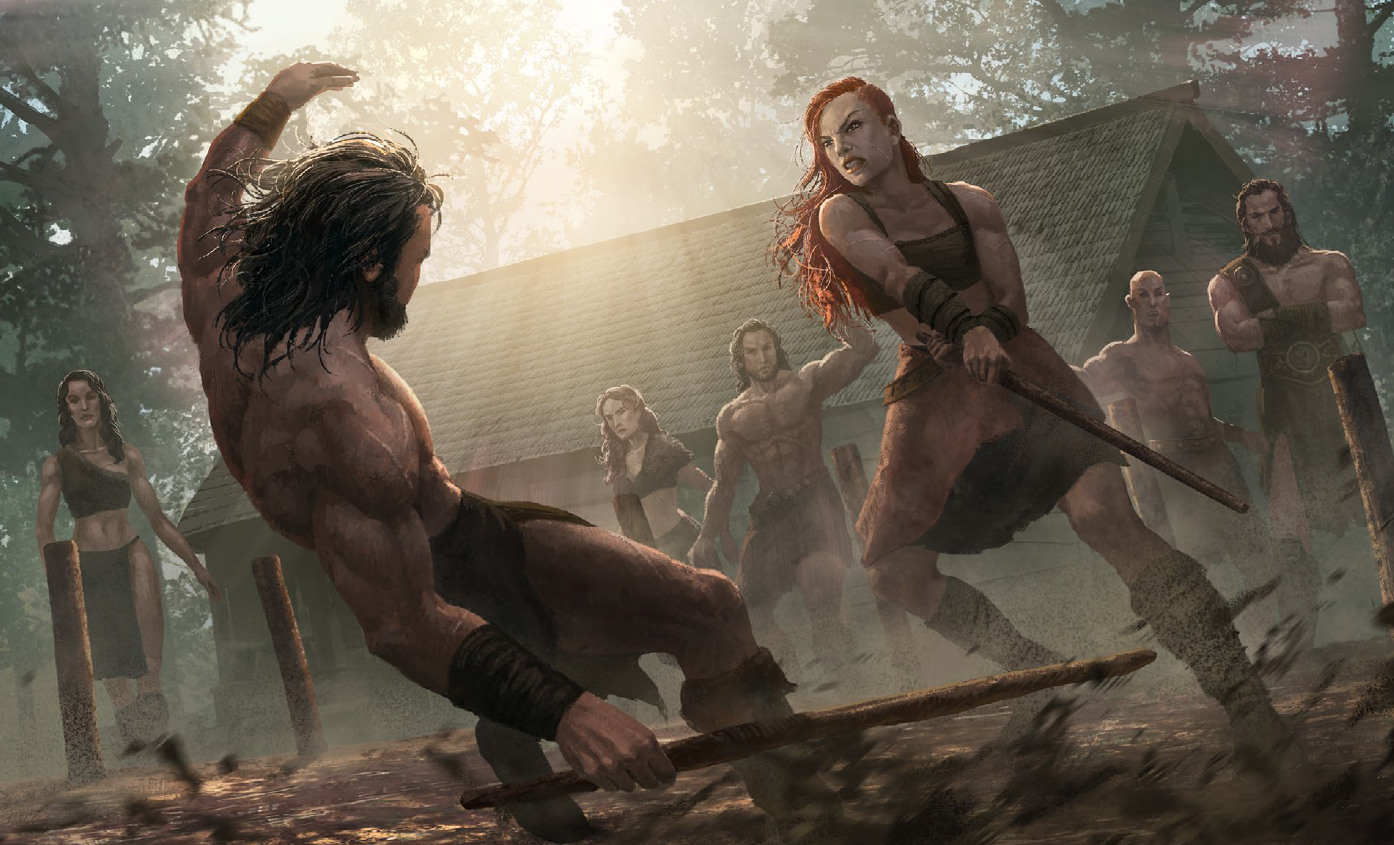 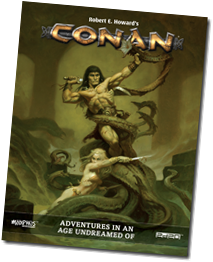 My first contact with Conan the Cimmerian was the 1982 movie “Conan the Barbarian”. It might not be the best movie ever and not very close to the Conan from Robert E. Howard’s stories, but still I was deeply impressed by the movie. I always wanted to learn more about Conan’s world, but it was many years later when I finally got my hands on a copy of Howard’s original Conan short stories.

I wouldn’t call myself a Conan fan, but I enjoy the mixture of swords & sorcery with elements of Lovecraft’s Cthulhu mythos which creates a delightfully different atmosphere to the standard Tolkienesque fare we often get nowadays. When Modiphius first announced that they were producing a Conan game I was thrilled. Unfortunately my financial situation at the time did not allow me to support the Kickstarter project. So I patiently waited until release.

I eventually got in touch with Modiphius’ Chris Birch who gratiously provided me with a review copy of Conan – Adventures in an Age Undreamed Of. The printed book is still a couple of months away, so this review is based on the already available PDF version of the game.

I will also try something which I haven’t done before. This review will be split into multiple parts. The core rulebook to the Conan game is a huge book and squeezing my review into a single 1500 words blog post wouldn’t do it justice. So this review will consist of at least two parts. The first, which you are reading now, mostly focuses on the character creation, and my thoughts on the 2d20 System in general.

And what a tome of a book it is. Since I usually prefer having a hardcopy especially when I intend to run a game, I tortured my laser printer by printing out all 432 pages. Luckily Modiphius provides a printer-friendly version which is missing some of the page backgrounds but which doesn’t drain your printer’s ink or toner that quickly. The digital copy of the game also comes with a map of Conan’s Hyborean Age and a set of various character sheets including the basic sheet (with and without textures), a more elaborate one in b/w and in color. Especially the latter one is just awesome and on par with the best character sheets I’ve seen so far. The character sheets alone make me want to play the Conan RPG right now! 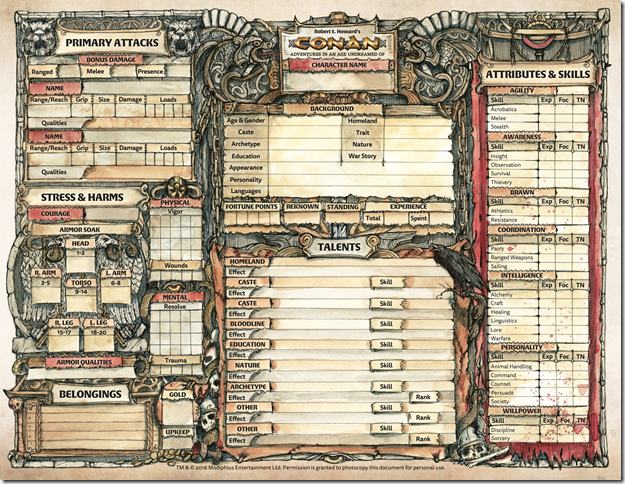 Overall the book is gorgeous. But that’s probably not too surprising since we are talking about a Modiphius game. The production values of their products have always been top notch. I am always amazed how quickly and almost effortless Modiphius became one of the big names in tabletop RPG publishing. One reason is definitely their love for their work and the awesome production values. But I digress.

One last thing before looking at the various parts of the book: I haven’t played Conan yet. This review (as most of my reviews) is based on reading the book from the perspective of a veteran GM. But I have played another game using Modiphius 2d20 System, so I guess I have at least an idea of how Conan might work at the game table.

With this out of the way, let’s talk about the 2d20 System at heart of the game. 2d20 uses – as the name implies – twenty-sided dice for task resolution. Usually the player rolls two or more d20. Each result is treated separately, and if your roll was lower than the attribute + skill tested, it’s a success. A roll of 1 is counted as two successes, as is a result which is lower or equal to the skill rank. In certain circumstances the number of dice rolled may be higher. There are various ways a player can improve their chances. Standard actions require one or two successes. A roll of 20 means that something has gone awry, even though the action was basically successful.

When a player rolled more successes than needed the remaining successes get converted to Momentum. Momentum is a meta-currency which can be used by the same or other players to add dice to their pools. The GM has a similar currency called Doom which he can use to mess with the players or add dice to their NPC’s dice pools. Momentum points get lost each scene, so it’s in the players’ best interest to make use of them as soon as possible. Aside from Momentum each character has also Fortune points which are a more personal meta-currency. More about that later.

From my experience in the Star Trek RPG playtest I have learned to love the 2d20 System. Even though some aspects might sound complicated and convoluted the first time you read about them, it’s a system which is quickly grasped as soon as you’ve played it for a while. Some people might not be too fond of meta-currencies like Momentum, Doom, and Fortune, but I’ve never found their use distracting or unimmersive in-game. One thing which I really like about 2d20 is that it’s very easy to get into, but has a lot of depth, which players can dig their teeth into.

The first thing most players come in contact with is character creation. When I first looked over the character creation chapter of Conan – Adventures in an Age Undreamed Of I felt a little bit overwhelmed. On a second glance it’s not that bad if you approach it slowly and in a step-by-step manner. At first you roll on a Homeland table (or pick the preferred result). The homeland determines your language and grants you the first Talent. This may be something like Cosmopolitan which allows you to be able to speak with everyone with the same talent as if you spoke each other’s language fluently, or the Hunter talent, which improves your chances when it comes to Survival tests. 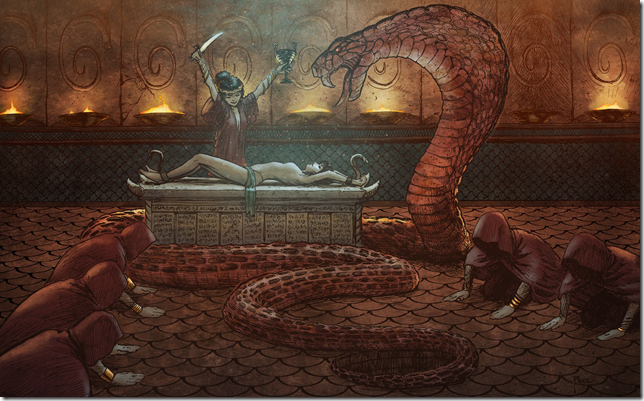 The attribute generation process is pretty elaborate. Each of the seven attributes starts at 7, but you can initially lower one or two to 6 in order to improve others to 8. After that you roll twice on the Attribute table which tells you which of your attributes are mandatory and which are optional. From the mandatory ones you pick one which is “best” and one which is “worst”. The best attribute gets improved by 3, the worst by 1, the remaining mandatory attributes get a +2, while all optional ones are improved by one. If one of your attributes is 12 or higher, you also get another talent: Ancient Bloodline. This means you’re obviously descended from one of the great fallen civilizations. This method of generating attributes might feel quite weird at first glance, but it’s actually an interesting way to do things. The attribute table also lists “attribute aspects” like “Strong and Resolute” or “Eagle-Eyed” which can help you to come up with a better vision of who your character is and what their strengths and weaknesses are.

After determining attributes players get to pick (or roll for) their caste which grants additional Talents and Skills. A member of the Crafter class gets the talents Subject and Tradesman and also the Craft skill, while a member of the Priesthood gets Priest, Subject and the Lore skill.

The next step is creating your story. Based on your caste you roll (or pick) on the caste-specific stories table. An example for a Escaped Serf/Slave story is “Hunted by the Law” which I have quoted below:

Hunted by the Law
They’re on your track, crashing through taverns and looking in the alleys. Perhaps you committed the crime and it was worth it. Perhaps you are unjustly tormented. Either way, a trail of suffering follows in your wake. Whose suffering do you regret the most and what will you do to put them at ease?

After that you pick your character’s archetype (or roll on a table). Possible archetypes are including but are not limited to Archer, Barbarian, Nomad, Pirate, and Witch/Shaman. The archetypes not only grants you additional skills and talents but also their starting equipment.

In the next step you determine your character’s nature. Is he or she more of a schemer or the practical type? This choice is not just relevant for roleplaying but also grants you – you guessed it – new skills and talents. You also get to improve an attribute by +1. Nice.

Before you come to the finishing touches and all the calculations (where you determine your starting Vigor, Resolve, and Gold), you still have to pick an Education and your War Story. Both steps are similar what we’ve seen before. You get additional background for your character and new skills and talents to boot. The character creation process in Conan not only provides you with the mechanical aspects of your character but also helps you to create a background story complete with hints on how to roleplay your alter ego.

This concludes Part 1 of my Conan review. Please stay tuned, Part 2 should be available in the next few days. If you have any questions feel free to post them below. If time permits I’ll try to answer them in the next part.

Dungeoncraft: The Future of Asecia