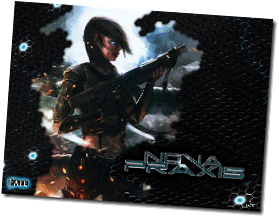 A while ago, Void Star’s Mike McConnell contacted me and asked me if I was interested in having a look at his upcoming sci-fi game Nova Praxis. I am a big fan of all things sci-fi so I agreed without hesitation. Even thoughI haven’t have that much time lately go give it the time it deserves, let me share my initial impressions.

Nova Praxis is a self-contained post-singularity sci-fi game based on Mike’s Strands of FATE system, which has been modified to suit the needs of a transhumanism setting. The preview PDF I had the chance to look at is a beautifully looking 216-paged PDF with awesome artwork and which is fully hyperlinked. For a mere beta version of the game it already looks gorgeous. If you expect your modern sci-fi game book to look sleek and stylish you won’t be disappointed by Nova Praxis at all. By the way, the author told me that some rules are still missing at that stage, so expect the final page count to be higher.

The setting is a post-singularity, post-scarcity setting with a lot of transhumanist elements. In the future an artificial general intelligence capable of human levels of creativity helped paved the way for miraculous technologies like FTL travel, virtually unlimited clean energy, molecular assemblers, lossless human brain emulation and digital conversion. Then the AGI suddenly shut down and nowadays research consists of deciphering the vast archives of the AGI to find its inventions.

Even though this technology is poorly understood by humanity, it’s used in all aspects of human lives. 30% of humans have become apotheosized which means that they slowly replaced each of their brain cells by nano machines. During that process the human mind basically becomes software and allows humans to transfer their ego into a new body also called a sleeve. Sleeves can either be biological ones of Cybersleeves, but using the latter is dehumanizing and may lead to mental instability. In contrast to other transhumanist settings (like for example Eclipse Phase) there are limits to what a sleeve can be legally. Biosleeves are not able to reproduce and are limited to human capabilities. There are people that hack their mind software and use illegal sleeves but these people are considered dangers to humanity.

I think I could go on and on about the various aspects of the setting but this would definitely be beyond the scope of this post. Mike has posted a few articles about the setting on the official Void Star site:

Rules-wise Nova Praxis relies on a modified Strands of FATE ruleset. Like many other FATE variants it used the d6-d6 dice method to create results from –5 to +5. But aside from other FATE games Nova Praxis doesn’t use the descriptive adjectives like Good, Great etc. to describe skill ranks, it uses plain numbers instead, which is not necessarily a bad thing. I very much like Mike’s approach to Stunts. In a way they are still in the game, but have been reinvented as Advantages which are not directly tied to skills anymore. I also like that fact that characters get only six Aspects during character creation and you get clear guidelines what each Aspect should be about. One is about the character’s approach, one for his or her belief, etc. Again this is a nice modification of FATE that especially new players should appreciate. Overall I noticed a lot of very cool tweaks to the FATE system. Even if you are not necessarily interested in the setting, you might want to pick up Nova Star for its rules alone.

It’s hard to be a reviewer