Hello everyone to the hump post! Week three of #RPGaDay2017 continues apace. Today is the flipside of yesterday’s, and it is:

August 16: Which RPG do you enjoy using as is?

Dungeons & Dragons, it’s D&D… You may be saying, “But wait Roberto! You said yesterday that you modified the game.” And I did, but when you take into account how much I’ve played the game (come back for Day 18 to know just HOW much!), I’ve barely scratched the surface of modifying it. I typically run the game as is. 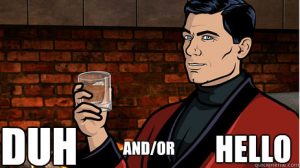 Of course, that was easier in the days of TSR. Once the OGL came about there is so much third-party content out there that you have a great menu to pick from when putting together your game. That’s the wonder of the Open Gaming License, it’s given us so many wonderful games to play. I may play it as is, but there is so much of it out there!

A simple reminder. The team at Desde la Fosa  is posting video replies in Spanish on our YouTube channel to the questions of #RPGaDay2017. We are grateful for your views, comments, and shares

So, what’s your as is game? Looking forward to your comments.

Ask the readers: Does not play well with others…