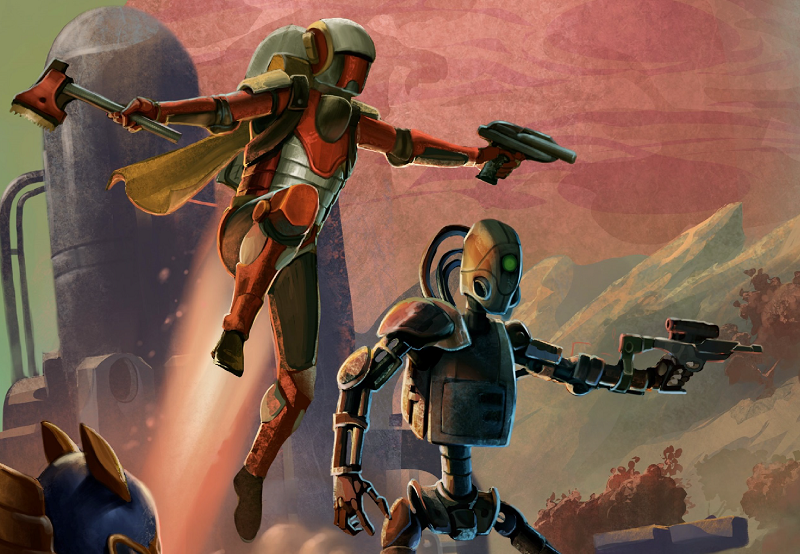 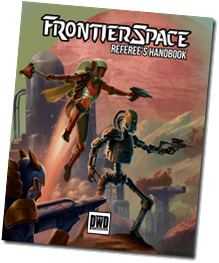 As I stated in my recent review of the FrontierSpace PHB, FrontierSpace is one of the most exciting releases this year. Even though I have played and even written fantasy roleplaying games before, I am first and foremost a science fiction fan. Unfortunately a lot of SF RPGs out there have been written by designers who love rules. It feels as if crunch and science fiction often come in pairs. Luckily FrontierSpace is an exception. The rules are between rules-light and rules-medium, but there’s definitely enough depth for long campaigns. The referee handbook adds optional rules and various generators to expand your FrontierSpace game and help the GM (or Referee as it’s called in the game) to do their job.

This review is based on a unfinished copy of the RHB provided by DwD Studios. Thanks again, Bill. The 198-paged preview copy lacks a couple of pieces of art but aside from that it should be identical to the finished version. The RHB shares its look and layout with the PHB. The release is probably only a week or two away and like the PHB the RHB should be available both as POD version (soft- or hardcover) and PDF via RPGNow/DriveThruRPG. I guess it will probably set you back $10 just like the PHB, which is a very good price, if you ask me.

So what does the RHB add to the table? The first chapter of the book called Game Guidelines mostly expands on the rules on the PHB. In the first section of said chapter there’s a closer look at Character Rules including the morality system, how it applies to robots, and how the Referee can react when players let their character’s act against their defined moral code. Personally I don’t think codifying one’s morality is really necessary (especially in a SF game), but that’s just me.

More interesting are the information on earning DP (development points, FrontierSpace’s XP equivalent). In this section the author gives detailed tips on how to grant DP after each session. There’s a bullet list with ten item which if applicable grant you 1 DP each. This makes granting DP a much easier task, since you just have to check which criteria apply. Veteran Referees may just wing it, but if you’re new to the game it definitely comes in handy.

Another form of reward is also detailed: Loyalty benefits. These are special benefits granted to characters who have been loyal to a certain patron may it be a powerful corporation or a local government. Loyalty benefits are usually designed by the Referee but a list of examples is given which contains benefits like special skill training, the use of certain vehicles provided by the patron, or even company stocks.

One of the common space opera tropes is psionics. And so it’s no surprise that the RHB adds rules for Psionic Abilities to the game. At the beginning of a campaign it’s the Referee’s job to decide how common Psionics are. Depending on the rarity, there are restrictions on if or how characters may learn these abilities. Psionics are handled basically like skills.  There are three Psionic skills and the various abilities are skill benefits. Psychometabolism contains Animal Kinship, Enhanced Reflexed, Enhanced Physique, Enhanced Senses, Enhanced Movement, Chameleon, and Self-Sustenance for example. The other two Psionic Skills are Telekinesis and Telepathy. 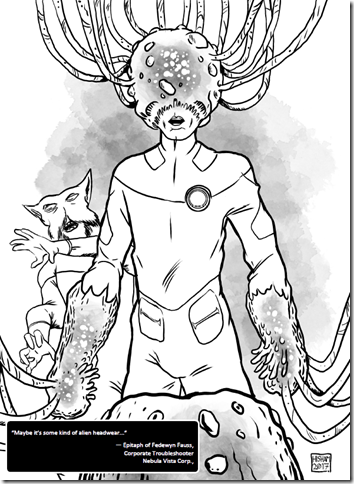 The Psionic Abilities system in FrontierSpace has several advantages over other systems of this kind I’ve seen in other games: it’s easy to restrict it’s availability and you should be able to restrict the kinds of abilities available as easily without breaking anything. I also applaud that Bill Logan decided to not use psionic points, power points or something similar. The only restriction is that psionic skill checks are modified by –20% if another psionic ability has to be maintained by the character. This makes things quick, easy and there’s no additional bookkeeping.

The next section covers Referee characters in detail. The game makes the distinction between Minor and Major NPCs. Minor NPCs are not that important for the story like bystanders or your common henchman. They only have one descriptor and a single percentile score. This score is used for every check related to the descriptor. Everything else is checked with half that score. Clever! All minor NPCs also have 10 BPs, 5 initiative, only one attack/round (even though they can perform multiple actions).

Major NPCs are much more detailed and have a full stat block, much like player characters. Depending on the rank set by the Referee these NPCs have a set of ability scores, skills and even skill benefits. Creating a Major NPC can be as involved as creating a player character. Optionally there’s also the possibility to use the Rank system on Minor NPCs as well, to make them more dangerous as the player character’s progress.

The Action & Adventure section provides a closer look at Action Checks, how to decide which modifiers are appropriate, provides rules for the various Conditions from being Blinded to being Out Of Control or Weakened, gives details on enviromental effects from Acid to Starvation, and provides rules for Breaking and Repairing Things. There’s also a section about Robot Immunities and their effects in-game. Oh, and did I forget there are Healing rules as well?

Another section of the Characters chapter covers investigations and how to run them at the table. Investigations are a large part of many roleplaying games and it’s great to have several pages dedicated to advice on how to run these in FrontierSpace. The rest of the chapter also talks about Time, Planetary and Space Travel, and last but not least Security Systems and how to overcome them. IMHO the Actions & Adventure chapter really makes the RHB a must-buy. It provides a lot of helpful rules and advice on how to run FrontierSpace expanding on the groundwork laid in the PHB.

The Combat chapter provides detailed rules of all kinds of combat in FrontierSpace. Again this chapter expands on the rules already found in the PHB. Sure, you can easily run combats with just the rules in the PHB, but the rules provided in the PHB expand and clarify things. If you are tactically inclined you’ll definitely get a lot of the advanced combat mechanics of FrontierSpace. The space combat rules even make use of hex maps. Personally I prefer more descriptive combats without the use of maps and miniatures, but as I said before, a lot of SF fans enjoy a higher level of “crunch” to their rules.

Chapter 2 of the book covers Equipment & Technology. There are details on passenger liners, rental vehicles etc. which the player characters may make use of to get across the universe before they have access to own starships and vehicles. There are also rules about Specific Model Firearms, Robots etc. which allow Referees to add some character to the generic equipment listed in the PHB. I’ve included an example below. 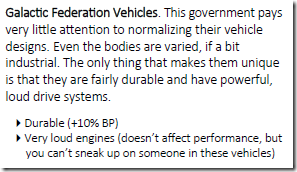 The Artifacts & Prototypes section provides information on cutting-edge technologies or left-overs from fallen civilizations. This section of the book comes in especially handy if you want to use FrontierSpace in SF universes with slightly different tech levels. There are rules for cloaking devices, alternate FTL drives, force fields, transports, freeze rays, plasma swords, quantum communicators, and other high-end technologies.

Another welcome addition to the rules is the section on Base of Operations! Your characters want to have a place to call their own, complete with labs, workshops, and perhaps a space ship hangar? The game has you covered. Last but not least the second chapter contains a section on psionic equipment, which is meant to support, detect or hinder psionic abilities.

The next three chapters, Alien Lifeforms, Adventure Preparation, and Space, contain rules and guidelines on how to create alien creatures, alien species (for player characters and NPCs), how to design missions, installations, and master villains. There are generation rules for space sectors, star systems and planets that are on par with the generation rules seen in GURPS Space or the various Traveller incarnations. If you love creating your own settings, there’s more than enough material here to create your own worlds and populate them with weird alien creatures. 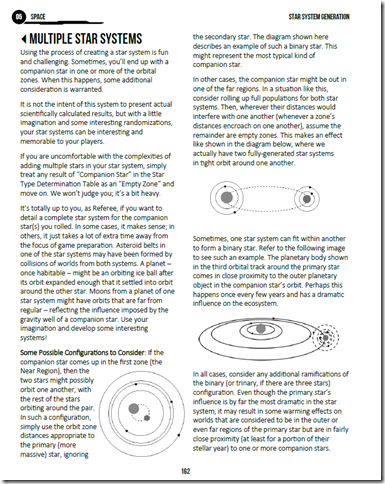 The book concludes with the referee guidelines chapter. Here you get advice on how to run campaigns and even provides several campaign ideas which itself are inspired by popular SF franchises like Bladerunner, Firefly, Defiance, Stargate, you name it. There’s an extensive section about the various types of science fiction, a list of storytelling techniques and how to use them, and last but not least tips on how to write adventures for FrontierSpace.

In conclusion the FrontierSpace RHB is a great addition to the awesome PHB. There are a lot of expansions to the rules (some optional), and many pages of great advice especially for new Referees. Sure you might have read some tips before, but it never feels redundant, because Bill Logan has always made sure it’s not just generic GM advice but really applies to the kind of games you can run with FrontierSpace. I wholeheartedly recommend this book to anyone interested in running FrontierSpace. The only drawback I can see so far is that it adds a lot of mechanics to an otherwise pretty rules-light game. But a) most rules are optional and b) some people like when their SF games have a bit more meat on their bones. One thing is sure: I’ll definitely pick up the FrontierSpace Referee’s Handbook as soon as it’s out!