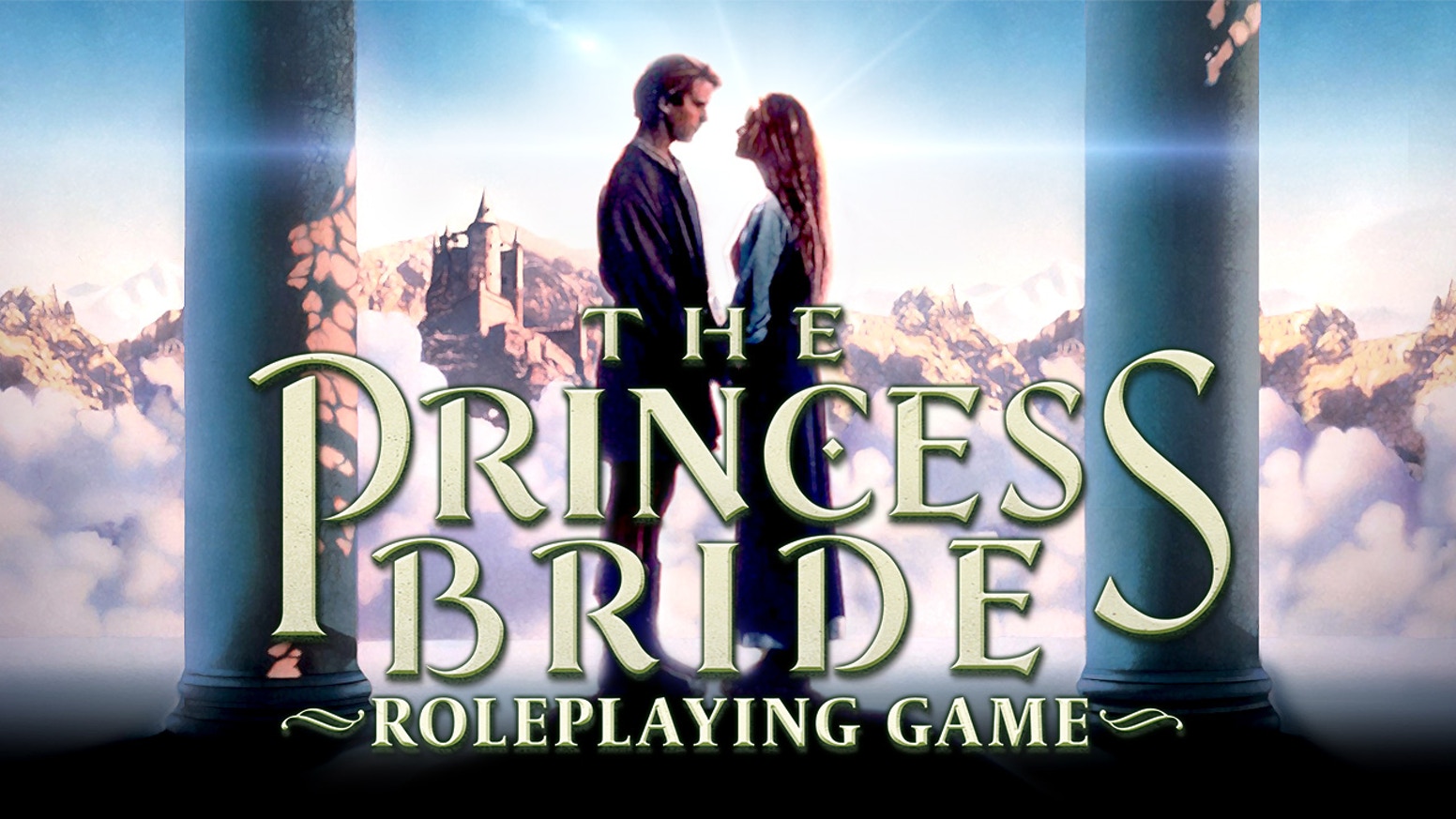 OK, so to be fair I gave The Princess Bride Role Playing Game the fastest of once overs before discarding it. Remember that I am a Rolemaster GM at heart and it was fairly obvious that The Princess Bride was not going to give me bloody disembowelments and detailed character creation. It didn’t look like there was going to be a much necromancy going on either, which is a current ongoing discussion over on my own blog.

On the other hand, if I put my own wants and prejudices to one side I think The Princess Bride deserves a fair review.

The usual caveat is that I have only read the freebie Quick Start Rules and you can download them for free from RPGNow.

So obviously this game is derived from the 1987 movie of the same game and much of the art comes from the movie. I think this is a good thing in multiple ways. I like the movies with tie in games. It helps everybody envision the same settings, key NPCs and even magical effects. If you haven’t seen the movie there is a book of the same name which came first. I confess I have not read either the book nor seen the movie.

So The Princess Bride is FUDGE based, which is a good thing, but also uses a 3d6 to FUDGE Dice conversion so you can play without the dedicated +/- FUDGE dice. I think this is a good touch. For a quick start book especially, taking the weird dice requirement away makes the game much more accessible. I used to play Champions/Hero System a lot and I know that there is a very pleasing feel to 3d6 and the 18 is rare enough to have the special feeling but common enough to happen at least once a session at least.

The writers have gone with just three attributes, twenty six skills, fifteen gifts and ten inconveniences (faults). I like skill driven characters but I cannot help but feel that just three attributes is too few. It is not that I feel that more attributes add more to a game mechanically but in differentiating one PC from the next they can play an important role. It is not possible to play someone who is naive AND observant in The Princess Bride as both a single attribute overs all aspects of intelligences, alertness and perception. On the plus side in describing how the attributes work and their ingame effects are directly related to the movie characters as in “Your character can have a high Body level and simply be very fit, but not necessarily huge: like Westley, for example.”

There is a skill in The Princess Bride called Blave. I had to google the word as I didn’t actually know what it meant. I was going to criticise the game for using such an obscure word for such a common skill. It turns out that every single definition of Blave relates directly back to The Princess Bride and quotes the book or movie. So this is a setting related word. If you are interested the Blave skill relates to gambling and bluffing and likewise Jouking relates to dodging.

So here is the first bit that I found truly cringeworthy. The Princess Bride has renamed FUDGE or FATE points to Grandpa, wait! Points. To quote the game “So if the dice just killed your character, there will probably be a moment of silence at the table. At that point, any player can say, “Grandpa, wait!” and push a token toward the GM representing a Grandpa Wait point.” I had to read that bit over just to make sure I had it right.

The Grandpa Wait points are a simple renaming of the standard FATE point mechanic in every other way except the cringy name.

The combat system as presented is very neat and tidy. I don’t really know the world of The Princess Bride but there are absolutely no mentions of non human foes or natural weapons so no guard dogs or other beasties. This is just the quickstart booklet so those rules could easily be in the full rules. I do like the damage track method of recording damage. As a way of recording damage it very neatly allows for escalating severity of wounds. The lightest wound is “It’s just a scratch” but once you have had that three times it automatically escalates to hurt, very hurt and so on. It is possible with a big weapon and a great roll to go from untouched to “incapacitated” which is one of the things I have always liked about my ‘home system’.

Up until this point in the rules everything in the rule book has been adjective based, skills are listed as Great, Good, Fair and Poor etc. When Situational Rolls are introduced these lead with numerical values -4 to +4. So for now it is numbers first. It then tries to massage the adjective labels into this system and it feels really square peg/round whole. I know that Situational Rolls are core FUDGE but in the core rulebook they get just a single paragraph and sits alongside tossing a coin or rolling a single d6 as aids for the GM to get random answers. I found that by leading with the numeric scale when everything else had been adjective based creates the impression that the adjectives don’t really work. The description of the adjective system then looks a bit laboured. If writers had stuck with the adjective system right from the off then this section would have been neater and less clunky.

On a personal note, I don’t think that resolving things by dice roll is to be encouraged. What I mean by that is; if a player asks ‘Are there any innocent bystanders on the street?’ then that is a potentially really important question. The Princess Bride says “You should usually roll them in the open, except in cases where it might reveal more information than the party would logically have.” So instantly the characters know that whether the person is there or not is just chance, but the next time if you say “Yes, there is someone standing on the corner.” They know you didn’t roll for that so it must be important. Logically then you would sometimes create red herrings of false information to stop your players inferring from what you rolled and what wasn’t rolled. So now you are sometimes rolling the dice when you know the answer to fool your players, sometimes you are rolling the dice because you don’t know the answer and sometimes you are not rolling the dice because they may come up with a wrong answer and the players will have seen the result. That last one is something like Player: “What are the chances of there being a horse I can hire?” Dice roll -4, GM: “Yes, there is a really impressive stallion just being walked out of the livery.” Player: “Really?!!” To be fair the rules do work but I personally do not think anyone should be rolling dice in front of the players. It is the GMs role to create a believable world and chucking the dice around does not do that.

The remainder of the The Princess Bride quickstart pdf is the a sample adventure and pregen characters. That I am not going to go into as I don’t want to give anything away but only to say that it remains true to the setting material as far as I can tell and is clearly aimed as a first adventure and new players and GMs.

As a final note I would like to point out that this looks like it is going to be a really popular game with its target audience. The kickstarter has over 1,000 backers and has raised over $78,000. You can be fairly certain that any problems with the game are more likely with me than with the game, if you are part of the target audience. There is just not quite enough disembowelling for my tastes.