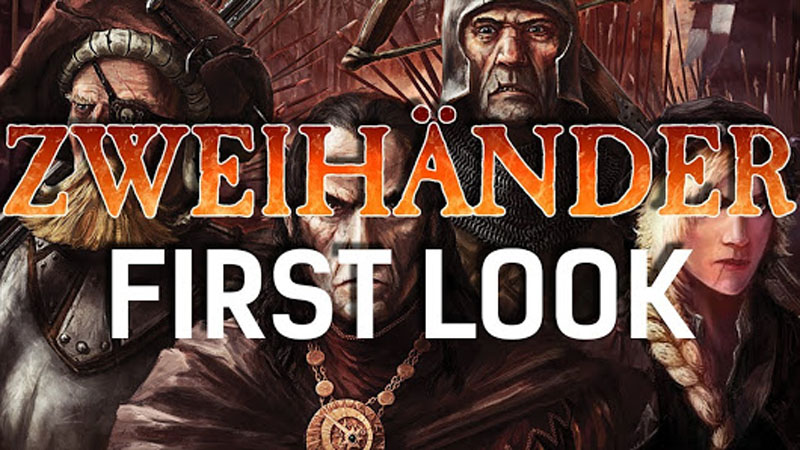 I have spent the past seven weeks reading the Zweihänder core rules cover to cover.At nearly 700 pages this was not a small task. The reason for this was purely for review purposes.

Over on my own blog I have done a chapter by chapter read through as inspired by Jeremy Friesen’s SWN series. I did the series on my blog for two reasons. The first was that there are potentially useful elements in Zwei for Rolemaster fans as both are d100, detailed and gritty games. Zwei by comparison is brand spanking new and shiny but most to of my blog readers are old hand Rolemaster GMs playing a game that is 30 years old or so.

The second reason is all about word count. I think I have written something like 12,000 words about Zweihänder in the past two months. That is fine on my own blog but it is a little presumptuous to monopolise Michael’s blog just to review a single game.

So enough about the how and why, what do I think of Zweihänder?

Mechanically, it is a simple enough game. It is a well written and simple game using a roll under mechanic on a d100. Some of the things that immediately appeals was that there are no levels and no hit points.

What Zweihänder lacks is survivability. It is written in that players are expected to hold a stable of characters and swap in a new PC when the current one dies. This is something that I struggle with. I find it hard to invest in a PC that I know is almost certainly going to die. I know that PCs die all the time but a great many fantasy games include Raise Dead, Resurrection or Life Giving which means that death is not necessarily the end. Of course if death is a real possibility it means that choices have meaning. If death is an almost certainty it goes too far the other way.

That is probably my only gripe.

On the plus side there is a lot of really good stuff here. I personally would have said that the magic system in Zweihänder is one of the three best magic systems I have ever used. The other two are Hero System and 7th Sea. Hero is simply the most flexible system imaginable and 7th Sea is the most integrated into the setting and by extension the most flavourful.

Zweihänder has a very simple critical system, both for critical success and critical failure. This same system runs through skills, combat and magic. The way that critical failures are applied in magic is that the successes and failures are explicitly described in each and every spell. You don’t get any of this bland “You failed so your spell doesn’t work.” Take this spell as an example.

FEAST FOR CROWS
You conjure forth a murder of crows, which harry and harm your
enemies.
Distance: Any one place you can see
Reagents: A crow, sacrificed (expended)
Duration: Instantaneous
Effect: After successfully casting this spell, you can conjure
a flock of murderous crows that swoop about your enemies,
dispersing only after tasting blood. All those who are caught
within the Burst Template suffer 2D10+[WB] in Damage.
Critical Success: As above, but those caught in the Feast for
Crows begin to Bleed.
Critical Failure: You call forth a flock of murderous crows –
armed with iron beaks and dagger-like talons – not from the
Material Realm but from the Abyss! They swoop about you
and you suffer 2D10+[WB] in Damage and begin to Bleed.

You can see from the spell description how those critical successes and failures are unique to each spell and add to the flavour of the spell. That runs right through the magic system. Everything feels really tight, slick and polished.

The next thing that I think is good is the bestiary. This is not the biggest bestiary in the world but the way it is structured and the breadth of the monsters included is more than adequate. They are also all the most iconic of monsters. Zweihänder also uses a system of true names. So where some games may have seperate stats for a Frost Giant, a Jotun and a Nephilim, Zweihänder uses a single base creature but rather than creating numerous variations it integrates the monsters into its folklore skill. So a Frost Giant is a nephilim as is a Jotun as is a Giant. The actual monster stats are kept secret but the characters can learn, through their skills and game experience interact with just the local names and local monsters.

Zweihänder also has a feature and mechanic for corruption. This also integrates with the bestiary with its mutants and corruptions. The lasting impression is that everything in Zweihänder is, just like the magic, tightly, slick and polished.

So my conclusion is that I like Zweihänder. Right now the game is $14.99 on DTRPG but it is about to disappear. Grim & Perilous Studios have signed a publishing deal and will be disappearing from all the OBS websites. You can preorder the printed books through Amazon and apparently Target and Walmart if you are that way inclined but the price is going to be an awful lot more than the PDF pricing.

It seems like the world and his brother already own Zweihänder but if you don’t and you think it could be your thing then I would get it sooner rather than later. If you really want to read about it in depth then you can head over to the RolemasterBlog and search for Zweihänder there and you will find my read through.

Some thoughts on roleplaying in the SF genre