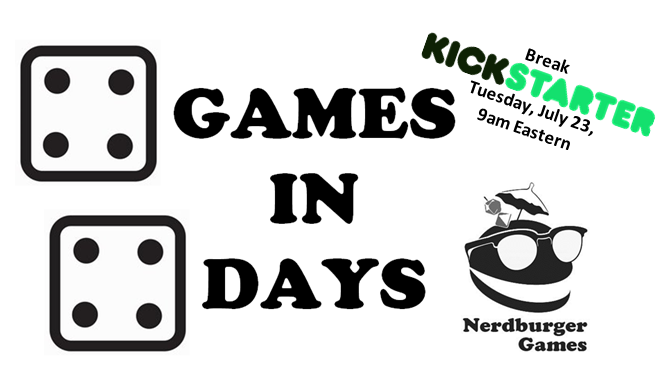 I have a game that is one proof read away from being Kickstarter ready, if you remember my Devil’s Staircase Wild West game. I was going to go live earlier in the summer but a friend who has written a Zweihander inspired wild west game (Ballad of the Pistolero) went live the week I had earmarked for my launch.

I then had a rather unfortunate health thing that landed me in hospital for a month, major surgery and all that sort of thing and it and everything kind of went by the wayside.

I am just starting to get back into the mood for setting up a kickstarter and looking around at some of the interesting things that people are doing.

Talking of which I have come across Nerdburger Games and an upcoming kickstarter for four four page games in a Kickstarter that lasts just four days.

I quite like seeing how these off the wall Kickstarters perform. I like rules light games. When Ballad was in Kickstarter I know the waiting for the 30 days was agonising. A four day campaign sounds much more bearable for the nerves.

If you want to keep an eye on this you can follow Craig and his campaign on twitter.

If you are not familiar with Nerdburger Games they have a variety of games available on DriveThruRPG.

Ballad of the Pistolero

Taking a few days off

May Days At The DriveThru …