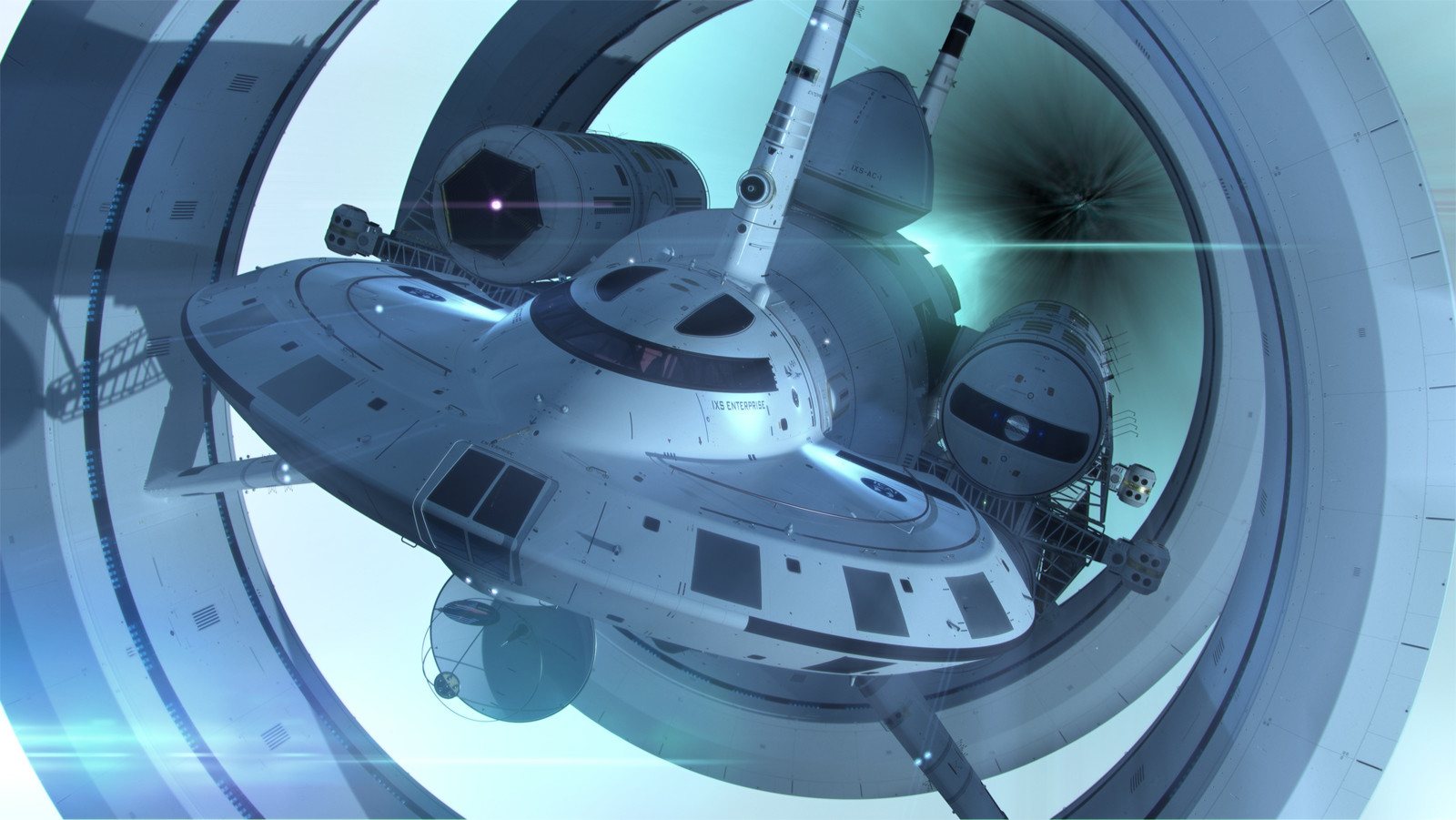 As I am currently working on my own settings for use with Traveller or the Cepheus Engine, I’ve thought about faster-than-light (FTL) travel and its influence on the setting. A setting without FTL at all is quite different from one where it’s fast and commonplace. But how fast is “fast” anyway, and how does the kind of FTL drive you’re imagining influence your setting? Let’s think about that.

Traveller as a baseline
Starships in the official Traveller universe (OTU) use the Jump Drive which allows ships to “jump” to Jump Space in which it then travels towards its destinations with speeds much higher than the speed of light. Each jump takes about one week. The earliest jump drives could only jump for one parsec (about 3.26 light years), while more advanced ones could jump for up to six parsecs in a single jump. Each jump also consumes a vast amount of hydrogen fuel.

This means that you can travel from system to system in a reasonable timeframe, but its also slow enough that it takes months to years to traverse all Charted Space. This works great for a game of Traveller, where player characters are supposed to have a new and original adventure in every system they jump to. Since there’s no FTL communication in the OTU information only travels as fast as the fastest starship. In some cases bad news and the cause of said bad news arrive at the same time.

Another interesting quirk of the Traveller jump drive is that it often takes longer to travel to the outer planets in the system than it takes to reach a nearby star system. Again, this is perfect for the kind of adventures Traveller was designed for. There could be mysteries hidden basically in every system, just because getting there is more inconvenient than travelling to another system.

Instant jump?
What happens if we change the jump time from a week to basically instantaneous? Travel becomes much, much faster. Sure, you still need to refuel between jumps, but this allows to make several jumps per day. With a proper network of refueling bases the Imperial Navy for example could reach the frontier systems in the matter of days. This also changes how fast information travels. In the OTU the slow travel of information meant that a feudal system of governance was the most practical one. But with instantaneous jumps more options open up.

Hyperspace Portals
Another FTL method popular in science fiction is travelling via hyperspace portals. These portals are usually opened by large complicated structures which are often (but not always) priceless artifacts created by some unknown precursor species. Starships enter a portal at their home system and emerge from another one at their destination. Travel through hyperspace can either be instantaneous or take some time, often proportional to the real-space distance between both portals.

At first glance Hyperspace portals and the jump drive are closely related. The main differences are that usually you can’t just travel to any destination, but each portal needs a counterpart at its target system. In many scifi universes hyperspace portals can also be closed, blockaded, moved, destroyed, or otherwise tampered with. This opens up many new story opportunities. Stellar systems not connected to the portal network are basically unreachable.

Warp Travel
Warp drives like in Star Trek and many other scifi franchise are quite popular but come with a slew of problems for the GM to solve especially if it’s particularly fast. Warp travel usually allows FTL in-system travel, which makes it highly unlikely that inhabited systems contain many unexplored places. It also allows starship to travel more freely, you just point your ship’s nose in one direction, throttle up, and off you go! With Jump drives or hyperspace portals the GM or setting creator can limit the amount of easily reachable travel destinations, but not so much with warp drives.

What’s right for your campaign?
That’s a touch question to answer. It depends a lot on what kind of stories you and your players want to tell. For a tale of early space exploration it’s probably best to have a slow and difficult FTL method. It doesn’t matter if you use warp drives or jump drives, the important part is that it takes quite a while to get to another system. Getting back to Earth or getting reinforcements should not be a matter of hours but rather weeks or months. If you can send a FTL probe back home and ask for replacement parts which arrive just a couple of hours later, a lot of cool plot ideas are immediately thrown out of the window.

On the other hand, if you plan to send your player characters to faraway and wondrous places all over the Milky Way, you probably need a fast and convenient way to travel. My advice is to check out various established SF universes and check what kind of stories are facilitated by the FTL methods used. But you have to remember that in many SF franchises (especially movies and books) starships travel at the speed of “plot”, which might not work well in a roleplaying game environment, especially if your player expect a certain verisimilitude or are particularly nit-picky about such details.

What am I going to use in my campaigns?
For my Near Space game I am still torn. Initially I planned to just use a Traveller-style Jump drive with a range of 1 parsec per jump. But for some reason this just doesn’t feel right. Increasing the travel time in Jump Space might do the trick though. A trip to Proxima Centauri should feel like a huge undertaking.

For my other campaign about pocket empires in a far future I’ll definitely use regular Traveller jump drives. What worked from Marc Miller in early ’70s is good for me as well.

So what are your thoughts on FTL travel and its impact on your campaign world? What is your favorite FTL method in SF roleplaying games and have you ever mixed various methods in one game? Please share your thoughts below.