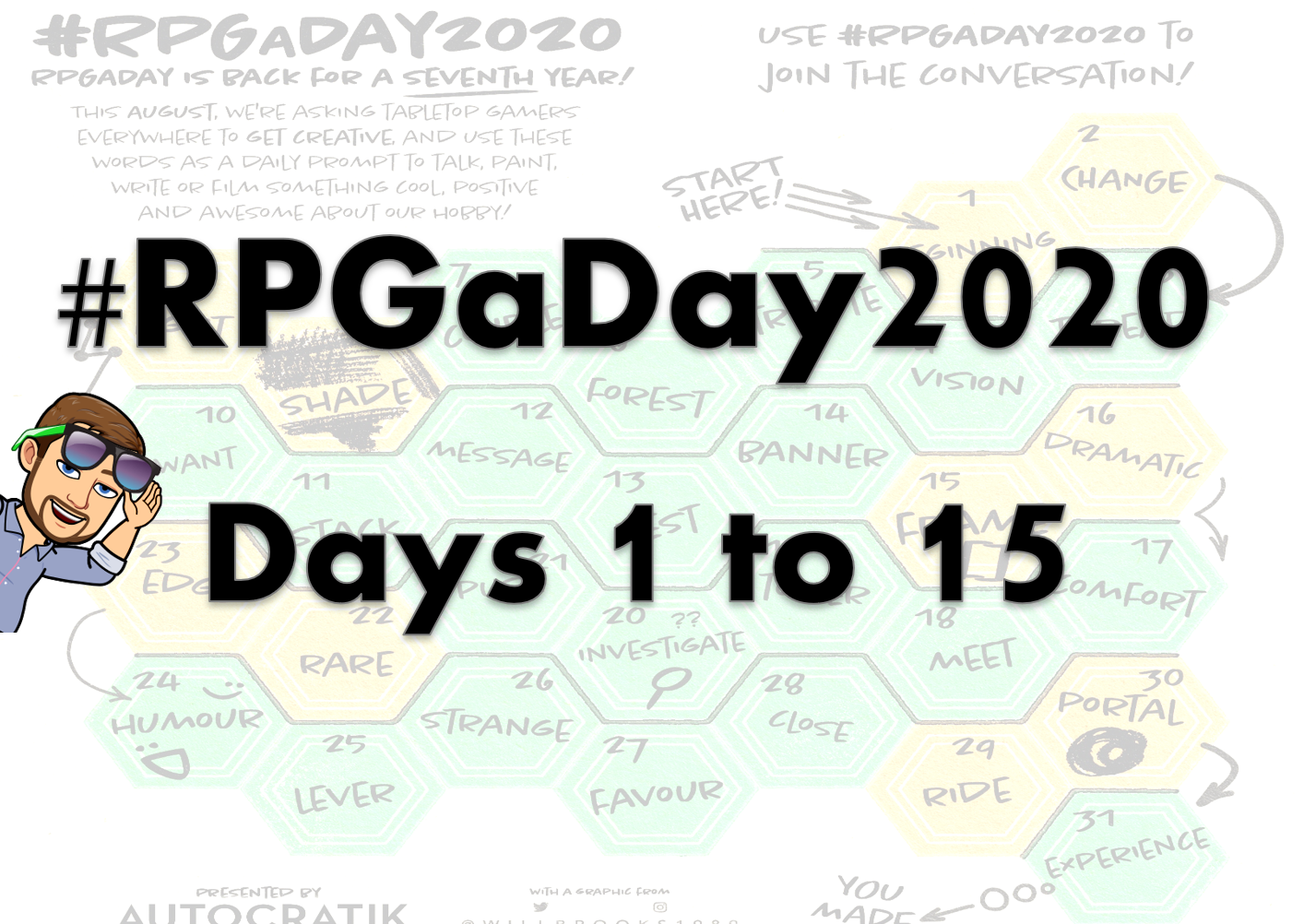 Like the Spanish Inquisition in a Monty Python sketch, nobody expects a post by Sunglar! If you search for my last post, it was August 5th last year, the supposed first post in a series for #RPGaDay2019, and after that nothing. The post before that was September 1st, 2018, the last post in #RPGaDay2018. See a pattern? I still say I’m a contributor to this blog, so I better fess up and write my yearly post!

If you want to avoid the sappy recap, jump ahead three paragraphs! Look for the #RPGaDay2020 image below.

I’ve been participating in #RPGaDay since 2015, five years! So much has changed. I’m a dad, I have a fantastic job, but one that requires a lot from me, when the baby is asleep I don’t want to do any writing or recording, I just want to rest. Hey, that does not mean I’ve given up on RPGs. I still play my weekly game, currently paying my 33-year-old homebrew campaign using Castles & Crusades by Troll Lord Games. I’m still active with Puerto Rico Role Players, and if we are friends on Facebook or you follow me on Twitter (@Sunglar), you’ll see me talking about RPGs and other subjects.

However, I have not been writing here in the blog or recording actual play videos for Desde La Fosa. I occasionally do unboxing videos or irregular reviews in Spanish at the Desde La Fosa FB page. Still, despite my desire to do so, RL has not allowed me to… and the current challenges of real-life are a whole new level!

My family and I are well despite the COVID-19 pandemic. Puerto Rico locked down early, and even if we’ve had a second spike as the island has reopened, we are generally as a society responding to the challenges and trying to stay safe. My 104-year-old grandma died recently, but not from complications of this worldwide crisis; she was 104! I’m lucky enough to be working from home, and my family and I are doing all we can to stay safe. I hope all the readers of the blog and all the friends I ‘ve met here are well and staying safe.

As in past years, #RPGaDay2020 is a celebration of the positive and wonderful things that come from role-playing games! As I’ve done for the past few years, I’m recording (almost) daily videos on the topics selected this year. I’ve missed a few days, but I’m consistently catching up and intend to see this to the end, one way or another. As of this writing, I’ve recorded up to day 12, one video in English and Spanish for each day, and two short videos in each Language for day 11.

I won’t bore you and link to each video; instead, I’m going to link to the corresponding playlists for the two YouTube channels:

Sunglar’s Musings is my personal YouTube channel; it is mostly #RPGaDay videos and a few other topics. The videos there are in English. Here is the YouTube playlist for #RPGaDay2020:

Desde La Fosa was a blog created with my friends Anibal, José, and Felipe, where we played RPGs, and we recorded ourselves doing it. Sadly, due to Hurricane María and other emergencies on the island that fell by the wayside. We occasionally share content, but these days it’s mostly a repository for the #RPGaDay videos in Spanish. Here is the YouTube playlist for #RPGaDay2020:

For this post, I’m jumping a little ahead and tackling the topics for days 1 to 15. I don’t; want this to be merely a post where I hawk my videos for #RPGaDy2020, I want to share some content r ideas exclusive for the Stargazer’s Word readers. So, I’m writing an adventure hook or idea for each of the topics for the first 15 days. I hope you find them useful!

Day 2 Change – NPCs the characters trust and know intimately are changing. At first, only their personalities change, but eventually physically. Why is this happening? Is it a curse the players are spreading? An attack by their enemies? Are they shifting realities?

Day 3 Thread – The characters can suddenly see a thread no one else can expending from themselves into the world. If they follow it, they find it connects them to the other characters. What fate unites them, and why are they the only ones that see this thread. Then introduce an NPC that can see it!

Day 4 Vision – A famous seer known for theirvisions has gone missing, one of the character’s stars having visions about the seer, making it possible to rescue them, but the visions also reveal the seer is a charlatan and no seer at all.

Day 5 Tribute – A local ruler pays tribute to a powerful enemy to avoid them attacking them. On the way to pay the tribute, the emissaries disappear. The supposed powerful enemy hires the character to find the tribute; they don’t want it revealed that they are no longer dominant or even real danger.

Day 6 Forest – Forests in the land are changing and becoming overrun by fungi coming in the depth of the earth; this change brings with it a mist that causes perpetual dusk, barging with it dangers from the world bellow. The real forests are being transported to the underworld. What is causing this?

Day 7 Couple – A newly married couple whose union will bring together opposing groups have disappeared, and the characters are asked to find them. When they do, each person in the couple has no recollection of their affection for the other, even who they are. What caused this?

Day 8 Shade – People are disappearing in town. At first, it seems random, but a little digging reveal that those who rest or linger too long under the shade of the old abandoned tower disappear. Are they trapped inside or has something more sinister happened?

Day 9 Light – The light of the astral lighthouse that guides travel across the planes, the galaxy, or the realm has disappeared. Travelers are lost, and the way to return is impossible to find. Are some travelers from other realities or times? Is this the beginning of a campaign? A mythic quest?

Day 10  Want – A Mythic beast wants a specific sacrifice regularly each year. The victim sent to satiate this want returns with great power wanting revenge upon those that sent them to their death!

Day 11 Stack – The characters must transport a stack of books to a new location, they are instructed not to alter the order of the books, but discover the books are changing every day, and new titles appear regularly. If they read any of the books, the writer asks them to rescue a librarian trapped in the library maze kept by the person who hired the characters.

Day 12 Message – A character receives a message, magical or psychic, meant for someone else. It is time-sensitive and a pela for help. If they deliver it, the intended recipient claims not to know what it means. If they don’t deliver it, the messenger continues sharing bits and pieces that my entice characters to find out who they are.

Day 13 Rest – Every time the characters rest, the world changes around them. Location, situation, NPCs. Eventually, they return to a previous location as if time had not passed. There may or may not be a patter to these shifts.

Day 14 Banner – Characters arrive at a new location they have never visited. A banner in town welcomes them and thanks them for their actions. Peoples seem to know them. Characters have no idea what they have done,

Day 15 Frame – A magical or arcane technology frame will create a copy of the image or picture placed within. The copy is a replica of the person in the photo or drawing, but they only exist for a few minutes, and once they have been brought forth, that person at that moment will not appear again.

If you want to find out more about #RPGaDay2020, look up the hashtag on social media, visit Autocratik’s blog, he’s the person responsible for this crazy idea, Runeslinger has also been pivotal in #RPGaDay being the success it is. There is an RPG a Day Facebook group which may also interest you. If the idea interest you, jump in and participate, the idea is to have fun, and it’s never too late to join the fun!

It has been a pleasure to write this blog post, and I hope to be back for the other half of the month of #RPGaDay2020. Please let me know what you think of all this in the comments. I’d love to hear from all of you. Stay safe, everyone!