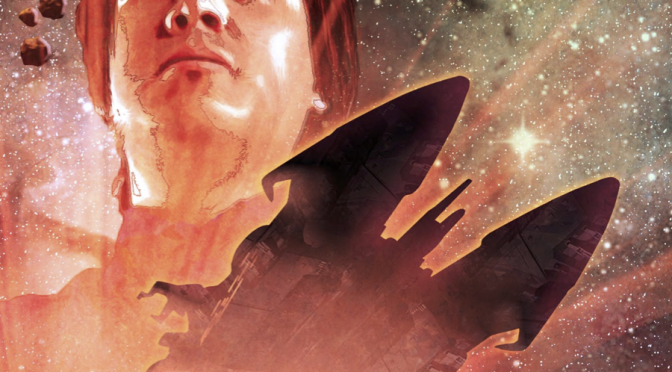 I am working on a number of projects at the moment and in an effort to make them as good as I can I am also looking at a lot of other peoples work. I like to look at really good examples and then see what I can apply to my own work. To that end someone recommended that I read the White Star rules.

This is the first D&D 0e clone I had read cover to cover. I can see why people like the concept. I haven’t played that sort of game in several decades but felt I could pick it up and run with it in minutes. The single volume rule book contained everything from character creation, GMs only section to starting adventure.

I am a huge fan of minimalistic games and to that end I liked how accessible White Star is. I also quite liked the caveat that the game is not intended to be complete and you are almost required to add more rules, change existing rules and generally make the game your own.

As an aside I have spent the last few years blogging about just one system. I have published 256 posts all on the same game. I have posted adventures, new monsters, book reviews, house rules and essays about what the system does well and what it does badly. To finally get to talk about different games feels slightly like an infidelity. To now try and talk about another game and not compare it to the system I know and love so well is really difficult.

I am not going to play White Star. For me it comes so close to achieving what it set out to do and that is to be a light weight, fast to learn and play set of rules and something that can be tweaked to fit any science fiction setting but it lost my sympathy by page 16 of the rulebook.

One of the cardinal sins in a pen and paper RPG is to say “You cannot do that!” If I wanted to be given a set of limited options to choose from then I would play a computer game. In a rpg you should only be limited by what you character knows and the reality of the situation they find themselves in. On page 16 the rules told me exactly what weapons an aristocrat may use and that they cannot use shields. Sorry but if I was an aristocrat setting out for a hostile world I would damn well make sure I had a shield if they existed! Each class or profession in White Star has a list of weapons they can use and for some reason a Star Knight, think Jedi, is prohibited from using a club. Surely that is the most basic of weapons and in a game with so few weapons and types of combat defined the club is going to be the default stand in for a bar room chair, a beer bottle and everything else that you just grab in a cantina brawl, but not Star Knights, apparently they either do not get to go to that sort of establishment or they escalate from throwing slurs against your mother to drawing a dagger. To me that says they probably have anger issues, either that it that is the reason why they do not get invited to the cantina for a drink very often.

White Star does cover itself by saying that all rules are there to be changed and that you are supposed to create house rules but if you start by changing every character class/profession before you even start that is a slippery slope. Where do you stop?

White Star uses the D&D six characteristics and 3d6 for each one. I guess they did this to make it feel as easy to digest for the D&D and Pathfinder players. These make up probably 90% of all players out there so making it an easy transition makes sense. 3d6 for stats has very few merits. It does not scale well to percentages. One point of stat is not 5%. 3d6 tempts people into 4d6 drop the lowest. Why do you need characteristics that go 3-18 anyway, neither the upper or lower bound have any particular resonance, surely 2-12 is sufficient or if you want more variation try 2-20 that at least scales well to percentage and d100 and still has an average of about 11.

You see as soon as you start saying house rule everything you don’t like then you open a can of worms. In my opinion ‘house rules’ frequently equates to ‘untested’. Not all house rules just fiddle around at the edges. I could say that all classes can use a club as a sort of lowest common denominator. I could say that anyone can use a shield after all it does say they are just built into the collars of cloaks or capes and worn around the neck. Why cannot everyone use them? The answer is game balance I guess but it could just as easily be class differentiation. It cannot be that the instructions for switching them on are written is six languages, none of which you speak, and are too complicated to figure out as they let fighters [mercenaries] use them.

I can see the simplicity and elegance of White Star disappearing very quickly as it becomes deluged with house rules and then ore house rules to fix issues introduced by the first house rules. A bit like the lady who swallowed a fly, I don’t know why she swallowed a fly but I do know she died.

I think if I was 12 again and had just seen Star Wars for the very first time and someone gave me this game I would be as enthused as I was when I got my very first D&D box set. I know that all systems have short comings that we forgive and overlook if we love the game but White Star is not one of those games, for me. The problem is that I out grew my D&D basic set and White Star does not do quite enough to make me want to forgive it its short comings.