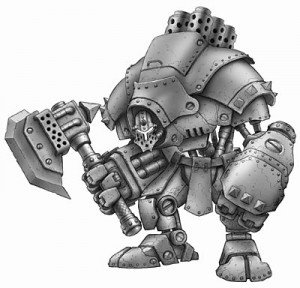 The people who followed my Dungeoncraft articles may already have guessed that the Iron Kingdoms setting by Privateer Press was one of the major inspiration for Asecia. In the beginning IK started as a trilogy of adventures that later even spawned the miniature games WARMACHINE and HORDE. IK consisted of the beforementioned trilogy (the “Witchfire” trilogy), the IK: Character guide, the IK: World guide, two Monsternomicons and several smaller sourcebooks. IK was using the d20 System License, so you probably won’t find many copies in stores nowadays.

But alas there hasn’t been any new releases for the IK campaign setting for quite some time now and Privateer Press recently announced on their forums that they will not release an updated version with D&D 4th Edition rules. But they can’t sell their existing material because the d20 System license is no more. The only way to reprint the books would be to make them compliant with the OGL, which in my opinion would be no impossible task.

But if you ask me, I am sure that Privateer Press is focussing on new projects and the IK campaign setting is more or less dead. With WARMACHINE, HORDE and the new Monsterpocalypse they have three miniature game lines. And I don’t believe they have the manpower or will to reinvigorate their roleplaying game line.
And although I own lot of the IK books I haven’t run more than the first part of the Witchfire trilogy. When I’ve concluded our current Pirates of the Spanish Main campaign returning to the Iron Kingdoms could be one of my possibilities. BUT shall I run it as it was intended (using D&D 3.5), shall I try to convert it to D&D 4th Edition (my group really likes the new system) or is converting the setting to a completly different system like Savage World, True20, GURPS, whatever the way to go?

Deep in my heart I still hope that Privateer Press will surprise us with their brand-new IK roleplaying game that perhaps even is compatible to their miniatures line in the future. But I doubt this day will come. So what would you do, if you were in my shoes?

Assassins, and Necromancers, and Hexblades! Oh My!