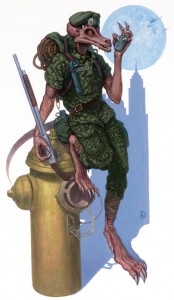 In an earlier post I’ve written about the dead or undead status of d20 Modern. And so I was looking for an alternative. And at once Mutants & Masterminds comes to mind. But isn’t it a superhero game? Yes, it is, but it’s far more versatile than that.

If you plan to run a modern day campaign with no magic, superpowers, whatever, just reduce the power level to suit your campaign style and disallow all powers that would not fit into your setting. A character like the costumed adventurer archetype would probably fit into any spy campaign, when you replace the silly bat costume with some special ops clothing. A martial artist is the easist to fit into the game and even a gadgeteer may be shoehorned into your campaign world (especially if you play in the near future or the campaign features gadgets like from a James Bond movie).

When you add some magic or psionics to the mix (like in the original Agents of PSI or Urban Arcana settings from the d20 Modern corebook), you can easily bring more M&M archetypes into the mix without even change that much.

The implied setting of M&M is a modern world (as the one we live in) with superheroes being a reality. The rule book also provides you with stats for modern and archaic weapons, armor and even vehicles. So that’s another issue you don’t have to worry about.

So, if you’re looking for a great roleplaying game for your modern campaign, check out Mutants & Masterminds.