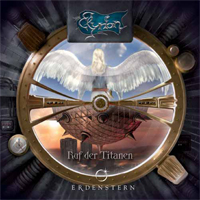 In October I promised you a proper review of Erdenstern’s new CD “Elyrion – Call of Titans“. Their last work is not part of their usual “Into the …” line but it’s a soundtrack created for the rather new roleplaying game “Elyrion – Call of Titans” by Prometheus Games.  Elyrion is a game that combines elements of Steampunk with Fantasy and is currently only available in German.

The CD contains 19 tracks  and has a total play time of 74:32 min. Although you can easily recognize the Erdenstern style, Elyrion sounds quite different from their other CDs.  It’s quite appearent that Erdenstern has tried out new styles on this album.
The first track “Der Kontinent Audakia” (The Continent Audakia) could be easily sneaked into a “Into the Green” playlist. It’s a very melodic piece reminiscent of their “Library of Fantastic Music” albums.
Other tracks are less melodic but more rythmic in nature like “Krieger aus Stahl” (Warriors of Steel)  or “Wolfsland” (Land of the Wolves). I’ve to admit that I haven’t checked out the Elyrion roleplaying game yet but the soundtrack does a good job of taking the listener on a journey to the continent of Audakia.

The album comes in a custom jewel case with a printed booklet (german only). Like with all Erdenstern CDs every track is described with three adjectives in the booklet, so that you can easily choose with music you use in a given roleplaying situation. For example “Die Schänke” (The Tavern) is described as merry, folkloristic, strange while “Berge und Ebenen” (Mountains and Plains) is calm, wide, expectant.

The albums sets you back €14.99 (or $21 or £14.49) and can be ordered directly from Erdenstern. For a list of other retailers, check out this site. I enjoyed “Elyrion – Call of the Titans – Soundtrack” very much and you should check it out if you have the opportunity. You won’t regret it especially if you like to use music in your roleplaying sessions.