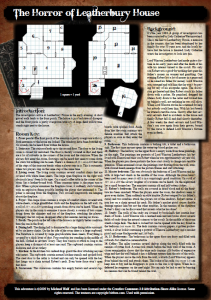 Following into the footsteps of Robertson Games I decided to share my submission to the One-Page Dungeon Contest with you.

At first I didn’t want to participate. I haven’t created any adventure before that was meant to be published. And I can’t remember when I actually ran a dungeon adventure of my own design. But then ChattyDM aka Philippe-Antonie Menard contacted me and asked me if I wanted to participate in the contest. I told him that I am not good at creating dungeons but he encouraged me to give it a try. So I sat down and started to think.

From the beginning I was sure I didn’t want to create a classic dungeon. My favorite genre is horror, so I thought about creating some kind of horror adventure. In the end I settled for a haunted house. A haunted house is some kind of dungeon (at least how I understand it) and in my opinion it provides a lot of opportunity for roleplaying.

With the help of my girlfriend (thanks again for the help! I couldn’t have done it without you!) I came up with a simple story. I would have loved to create a much more elaborate background but given the size constraints I decided to keep it simple. In my opinion the GM should be easily able to flesh out everything I had to leave out.

When I had the basic story I searched for blueprints of victorian houses and when I found one, I used it as a basis for my map. Using the map-making tutorial I found at the Cartographer’s Guild, I created the map in GIMP. Creating the map was actually easier than I first thought and if you ask me, the result looks quite professional.

When the map was done I started working on the layout in Adobe InDesign. I used free textures from bittbox.com to give it the look I wanted and when the basic layout was done, I started writing the room descriptions. You might find it strange that I created the layout first and then added the text, but since I had to work with limited space I found this much easier than cutting the text afterwards.

Initially I wanted to add a sidebar with GM tips and ideas how you could use the adventure in different settings, but I just couldn’t fit it all on that one page. The adventure as it is, was mainly created with Call of Cthulhu or a similar horror game in mind, but I think you could easily transfer it to your favorite fantasy setting. When I have the time, I will definitely turn it into an adventure for Dungeonslayers.

By the way, you can download the complete one-page dungeon “The Horror of Leatherbury House” as PDF. Enjoy!