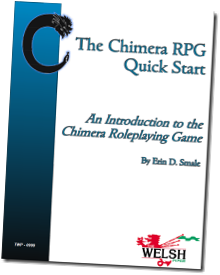 Yesterday fellow RPG blogger Greywulf wrote about the new Chimera 2.0, a quick-to-play multi-genre RPG. After reading his post I headed to the Welsh Piper website and was quite shocked that they want $20 for a 111-paged PDF, which is quite expensive for a rather short indie RPG. But that didn’t keep me from signing up for the newsletter to get access to the free quick start rules.

And I am happy that I’ve done so. From what I’ve seen so far, Chimera 2.0 is quite a treat. Chimera was created with the busy game master in mind. Most of us have a job, family and even kids and don’t have as much time on our hands as we had a couple years ago. So rules-light games that can be run with short or almost no prep time are getting more and more popular. And Chimera fits this bill perfectly.

Characters in Chimera consist of Attributes, a character kit, Skills and Traits. The six Attributes are rated as Below-Average, Above-Average and Average instead of being ranked with numerical values like in most other games. A task’s Target Number is directly linked to the rank of an Attribute. The target number for an action using an above-average attribute is 8 for example. The GM can of course modify this target number according to circumstances.

Character creation is also very fast but gives players some intriguing options. Each character starts with one above-average, two average and three below-average Attribute. Each character then chooses one or more character kits to acquire skills and traits. Each kit also comes with a special perk exclusive to this kit. It is possible and probably even recommended to take even more than one kit during character creation to have a wider access to skills and traits. This is balanced by the improvement cost. Each kit comes with an IC and you can improve your character after a number of game sessions equal to your character’s IC. Players can also choose to take flaws for their characters like Clueless or Unlucky which grants them free improvements during character creation.

Traits give the character special bonuses and/or access to special abilities like magic, while skills represent the character’s learned abilities like Fight or Pilot. Skill tests are made by testing against the linked attributes’ Target Number. When making action rolls players can also use Fate Points to roll additional dice to improve their chance of succeeding. All in all the basic rules are very easy and don’t need any serious number-crunching.

The 20-paged quick start PDF also includes rules for magic powers, gear and combat. I contacted Erin and told him of my concerns and he actually changed the quick start PDF based on my recommendations! Thanks again, Erin, and I am glad I could help. The quick start PDF concludes with a short introductory adventure which should help you to playtest the rules.

But of course the 20-paged PDF only covers a fraction of what Chimera 2.0 has to offer and although I haven’t bought the full version, yet, I am sure it’s worth it’s price. And when I interpret the announcement on the official website/blog correctly, subscribers of the newsletter should get a serious discount on the purchase of the book.  This was a bug, that should now be fixed. If you didn’t get the discount with the newsletter’s welcome letter, just contact Erin using the contact form on his site.

If you are looking for a rules-light game system which allows you to run games in multiple genres, you should give Chimera 2.0 a look. If you are not willing to buy the full version, sign up for the newsletter and give the quick start rules a try. You won’t be disappointed. By the way, you can also buy the the game from RPGNow (RPGNow affiliate link).