Silver Spring, Maryland (January 26, 2010) – After 4 years in the making, Evil Hat Productions is not only pleased but proud to officially announce The Dresden Files Role Playing Game (RPG) will release at the Origins Game Fair, June 23, 2010. Fred Hicks, one of the founding partners of Evil Hat, said, “Stars and stones! This project has been a labor of love for a great many people for a few years now. The thought of sharing these books with people, getting them in their hands, and having people role playing in the Dresden-verse is making me all misty.” [..] 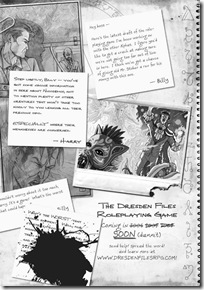 The Dresden Files RPG is one of the games I’ve been waiting for quite a long time now. I actually started reading the novels AFTER the game was announced. I thought when the Evil Hat guys are making a game about Harry Dresden, then the books must be cool. And they are. Since then I’ve read a couple of the Harry Dresden novels and I can wholeheartedly recommend them to any fantasy fan.

The Dresden Files RPG will actually be split into two books, “Volume 1 – Your Story” and “Volume 2 – Our World” and both books will make their first appearance at the Origins Game Fair in June. Shortly thereafter the books will go retail and you’ll be able to preorder the books from the Evil Hat online store and Indie Press Revolution as well. People who preorder will get immediate (and I hope free) access to the PDFs. The PDFs will also be available as a stand-alone product a bit later.

What I’ve read about the Dresden Files RPG so far looks very promising. I will surely preorder the books as soon as possible and make sure that I’ve reread all the novels before June. The hardest part is probably to get my players interested in this game. Wish me luck! 😉