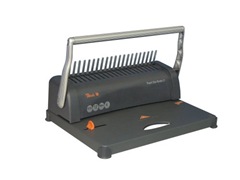 I know that a lot of gamers own PDF versions of roleplaying games, either because their is no printed version, the PDF version was way less expensive or they just didn’t want to wait for the physical book to ship. If you have a laser printer or access to one (and the permission to use it) at work, printing a whole book is usually not a big deal.

But what to do with a stack of paper? The easiest way is probably to put it into a ring binder. But this also has its disadvantages. The main reason is that most binders are pretty bulky and the holes created by the hole puncher are usually not as close to the paper edge as you would like. In the past I usually carried the printed out book to a copy shop and asked them to bind it. In most cases using the plastic comb binding was the way to go. Alas this is quite expensive. The last time I paid 6€ for binding a single book. And that’s too much in my book (no pun intended).

Ok, what to do? After some research I realized that Plastic Comb Binding Machines aren’t that expensive. I got one for about 32€. A set of 25 plastic binding combs sets you back around 4 to 5€. Most binding machines come with a couple of binding combs, transparent plastic cover sheets and cardboard back covers. That’s more than enough material to get you started. 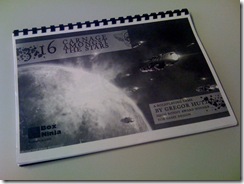 The first step of binding is punching the 21 holes into the paper. You can punch holes into approx. 8-12 sheets at once, so this can take a while. The worst thing you can do at this point is to get sloppy. I wasted a lot of paper because I punched the holes into the wrong side of the sheet or I didn’t align the sheets properly. The more concentrated you work the better the results will be!

The next step is getting the punched sheets onto the plastic binding combs. It took me some time to figure that step out because my machines’ manual was really useless in that regard. But when I finally figured it out, it was easier than I expected it to be. Just make sure the diameter of the binding comb you use is large enough for the book you want to bind. I usually use a transparent plastic cover sheet and a black cardboard back cover sheet when I bind something.

Especially when you print a lot of PDFs (like I do) the machine will pay for itself even after a couple of  bindings. It might be more work than just going to a copy shop, but it’s definitely cheaper in the long run. And you don’t have to leave your home!