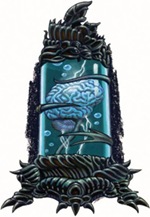 My evil brain is messing with me again. For a while several campaign ideas have been on my mind, but for some reason I’m unable to turn these loose threads into something coherent. Everything I come up with sounds pretty awesome at first glance, but when I start to think things through it all feels “meh”.

After taking a break from GMing for way too long I really wan’t to get into the DM’s chair again, but it seems my brain is doing everything it can to prevent me from actually doing so. A while back I have talked about my depressive episodes here on the blog. I can gladly say that I am feeling much, much better than back then. I haven’t had bouts of anxiety for weeks now, I sleep much better and the dark thoughts are in mostly check. But alas I still feel overwhelmed and intimidated when I think about GMing.

I sometimes guess that I am putting way too much pressure on myself. I want to have more roleplaying games in my life again, but I am not content with making a few cautious steps. For some reason I always end up making plans for epic campaigns that almost immediately fail while still in an early planning phase. The fact that scheduling games is a hassle doesn’t actually help things, but even if I had a couple of players on the call, I wouldn’t be able to get anything done. I can’t make up my mind what kind of game I want to run, I keep coming up with new ideas while discarding old ones. Heck, I can’t even decide what system I want to use. First it was Fate Accelerated, then I was thinking about Mekton Zeta, a little later I decided to give BRP another look.

I also constantly fear that the game my players would love to play is not the same thing I would love to run – even though they have repeatedly proved me wrong. The only thing I know for sure is that I don’t want to hang up the GM mantle for good.

How have you guys dealt with similar issues in the past? Do you think I am just a bit burned out and should give it a few more months? Please share your thoughts in the comments below. Every comment is highly appreciated!