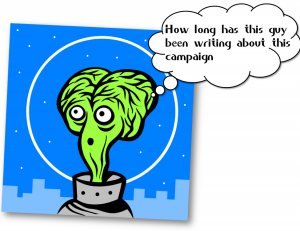 Hello dear readers! Not writing too much on the blog these days, mainly because I’m working on my Thesis. But on those days when the writing is done and I’m not ready to go to bed, I need to work on something else, something to unwind. So I’ve kept tolling away on my sci-fi campaign, Wanderers of the Outlands. I’ve written at length about it here, and one of the topics was alien species. I’ve settled on two alien species for the game, and they will not be common, my idea is for the game to be very human centric.

One of the races is a cat-like species, something common to many sci-fi setting, but for the other species I was going for something completely different, at least as different as I could conceive it! Thus where born the Vuluhuan…

So why does it say “Ask the Readers in the title of the post? I would want your feedback on the species, and specifically about the rules portion. This is my first attempt at constructing such a complex race for Savage Worlds. I know there are Savage Worlds fans among our readers and I will appreciate your input.

The Vuluhuan are six legged beings with a very unique physiology and social structure. They value knowledge greatly, specifically knowledge acquired first hand. Some may say their very existence is driven by this thirst for knowledge through experience.  A Vuluhuan’s accumulated knowledge and experiences, what other species may call consciousness or the more religiously inclined a soul, is called the self in their language. Their bodies they consider vessels or tools. Both the self and the vessel are considered separate and interchangeable in their society, for the Vuluhuan can transfer their self from one vessel to another through a complex biochemical process.

This process, known as the sharing, is arduous and very personal, akin to intimacy in other species. The two Vuluhuan exchange enzymes and genetic coding thought a species specific naturally occurring process where they switch a self between each other; when a self is transferred to a new vessel, that vessel’s brain is overtaken by the new self and that Vuluhuan’s consciousness now resides in a new body. Initially this newly transferred self becomes dominant and becomes the self manifesting in that vessel. To an outside observer following this process it would seem as if the Vuluhuan’s consciousness had switched bodies.

The newly transferred self now shares the highly developed Vuluhuan brain with previous selves already hosted in that vessel. The Vuluhuan brain can hold various different selves at once, and once a new self is fully integrated, a process taking anywhere from hours to days, the Vuluhuan can switch between personalities for different purposes. The vessel holding the original self during the sharing process does not lose that self, it only goes dormant as the new self is integrated into the cortical amalgam. Thus a Vuluhuan consciousness, or self, exists in several bodies at the same time, independent and separate of each other.

The ideas of self, time, personality and property are very different and fluid in their society, each Vuluhuan self keeps its own time and history according to its memories and experiences, accommodating to a locally agreed to, and to them seemingly arbitrary, measurement of time for the purpose of collaborating with others. They reproduce asexually, and this is the only time Vuluhuans loose a self, they pass on that self into the new young, who then in turn goes on to collect new experiences and become a new amalgamation of beings. The Vuluhuan word for their local community has been translated as brood by humans; they are composed of anything from six to over a hundred members, many sharing selves going back centuries. The broods are not static and Vuluhuans move from one brood to another as their amalgamation of selves change. Young Vuluhuans are raised by the community, and the parent shares equal responsibilities for the rearing of the young one with other members of the brood. The young are taken care of for a short span of between two and three years when the Vuluhuans become fully developed and join Vuluhuan society as full members. Thanks to anti-agathic drugs Vuluhuans are very long lived, often only allowing themselves to die when they consider their search for a specific piece of knowledge has been acquired or an epiphany reached. As death approaches it is not uncommon for this Vuluhuan to enter a period of fruitful reproduction that allows many of its selves to continue their journey.

Their political structures seem chaotic and disorganized to outsiders, but since many members of larger broods share selves and experiences, there are few significant instances of violence. Broods organize into larger groups, called fellowships by other species, based around ideas, experiences and functions, often belonging to more than one. These groups are part philosophical movement, part guild and part research organization. When Vuluhuans enter into conflict the fellowships attempt to negotiate a settlement by sharing selves, when this proves unsuccessful there are reported instances of conflict and warfare, but they seem to be short lived and very localized. They are not religious in the sense some humans conceive of the faith experience, but they discuss and explore all sorts of metaphysical concepts and their arts and sciences seem inexorably intertwined with these concepts. The Vuluhuan have not experienced open warfare since the distant past when they began space travel and the broods and fellowships became disconnected and vastly different in their outlook due to prolonged space travel and distances before the development of FTL travel.

Vuluhuans who travel beyond Vuluhuan Space are seen as the bravest of the species, willing to seek knowledge beyond the brood or the fellowship. Still many Vuluhuan are weary and fearful of the effects this prolonged absence may have on those that are gone for too long.

PS – So that’s about it… I had NOT settled in an appearance for them. I knew I wanted them NOT to be bipedal, but look somewhat familiar or endearing, animal-like, enough for humans to project some preconceptions on them, and make their culture, hopefully, contrary to what those preconceptions would be. I recently saw some alien concept art by the artist Damalia in Deviant Art. I liked it so much that the above description includes some ideas taken from her concept art. I would like to publically compliment her on her art and thank her for her inspiration. Check it out!