It feels like every time I turn a corner, I am bearing witness to yet another Old School Renaissance (OSR) role playing game being released into the world. A world that already has several great OSR games to choose from. Does our world really need another one? The answer to that question is, yes. I have yet to hold a game in my hands and exclaim, ‘THIS IS PERFECT!!!’ I think that until that perfect game is released, game designers will continue working tirelessly to sculpt and mold games until that perfect game is created. 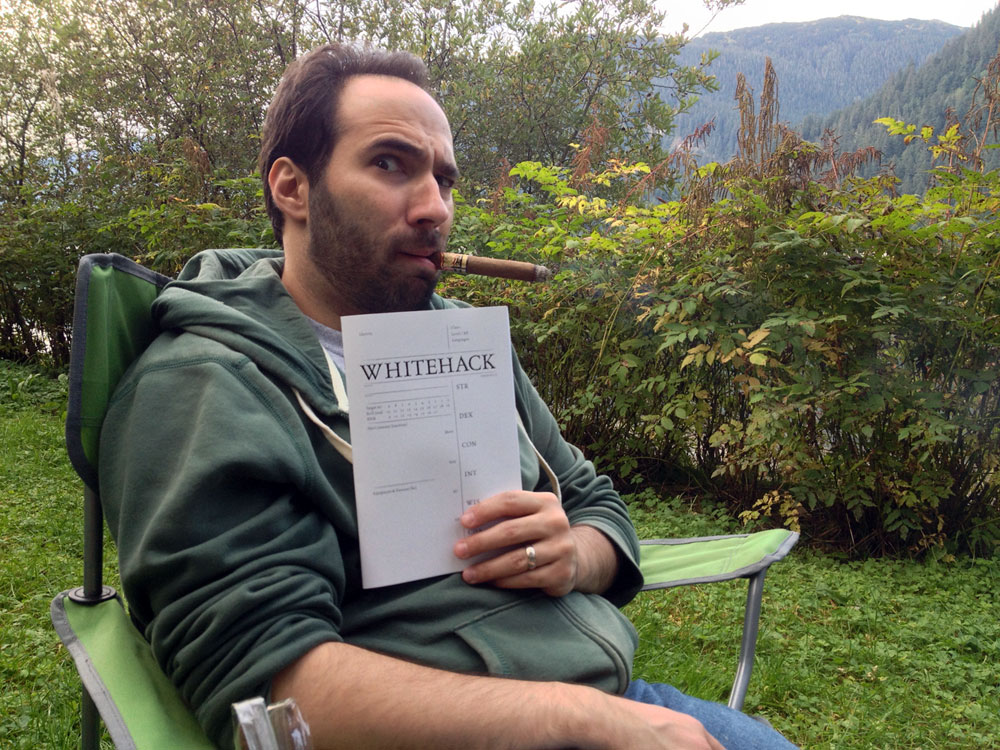 The most recent attempt by Christian Mehrstam, was recently released and is called WHITEHACK. A game with which its rules are written in a shockingly small 32 page rulebook  More impressively, within this rulebook containing all the information you need officiate a game, start an adventure, implement monsters, build characters, equip those character, and level that character up through level 10. You can literally start your first WHITEHACK adventure within minutes of getting your hands on this pint-sized book. Dice not included. 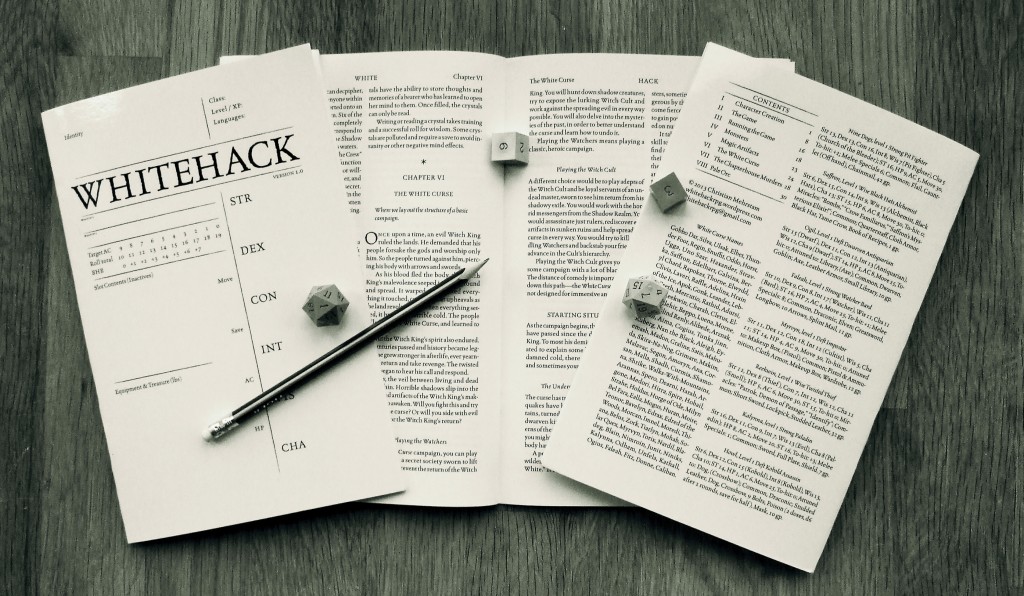 WHITEHACK, like a lot of OSR games, was inspired by the original Dungeons & Dragons (D&D). It was only after some time and the implementation of several house rules, Mr. Mehrstam’s game started to look less and less like D&D and feel like something more. Something different. The home brewed game had morphed into what stands before us now. WHITEHACK.

My review copy of WHITEHACK came to me directly from Lulu.com. The conveniently small rulebook arrived in a well packaged box that seems identical to boxes I get from Amazon.com. 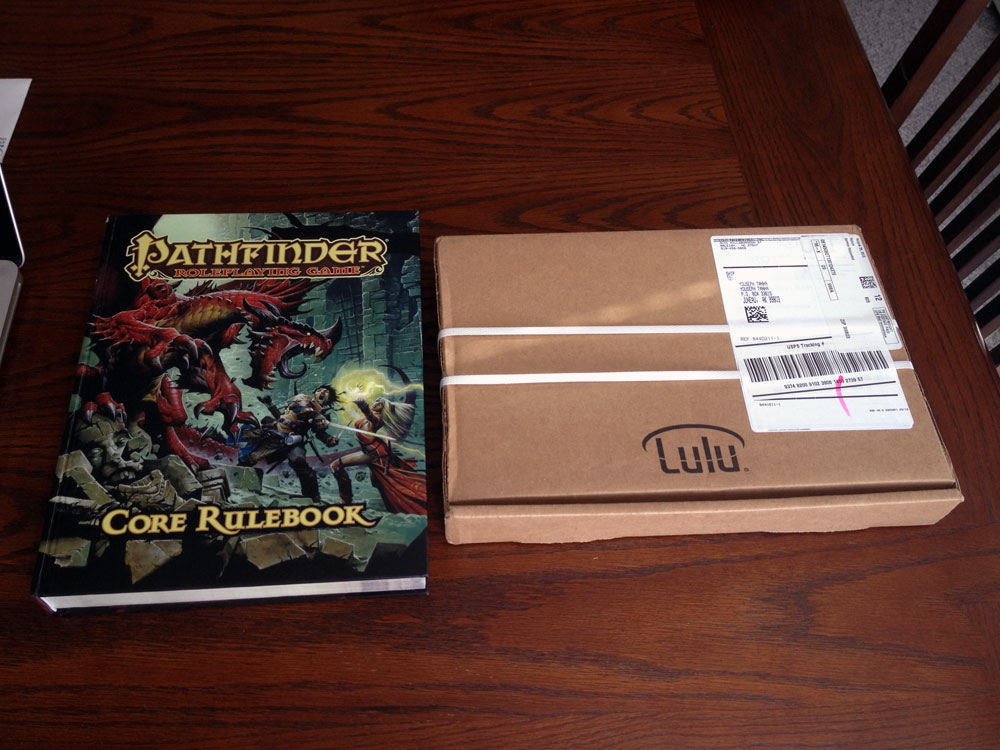 The first thing you noticed about WHITEHACK is that the front cover is a character sheet. An impressively simple looking one at that too. One that anyone could easily recreate on some notebook paper. I am a huge fan of simplistic character sheets. Pen and paper Role Playing Games (RPG) these days all to often require notecards just to keep track of weapons and abilities. It seems like most modern RPG characters won’t even fit on the front and back of a character sheet anymore unless you have a computer program to print them off for you. That just takes me out of the game. Seeing the character sheet for WHITEHACK left a warm and fuzzy feeling inside of me. 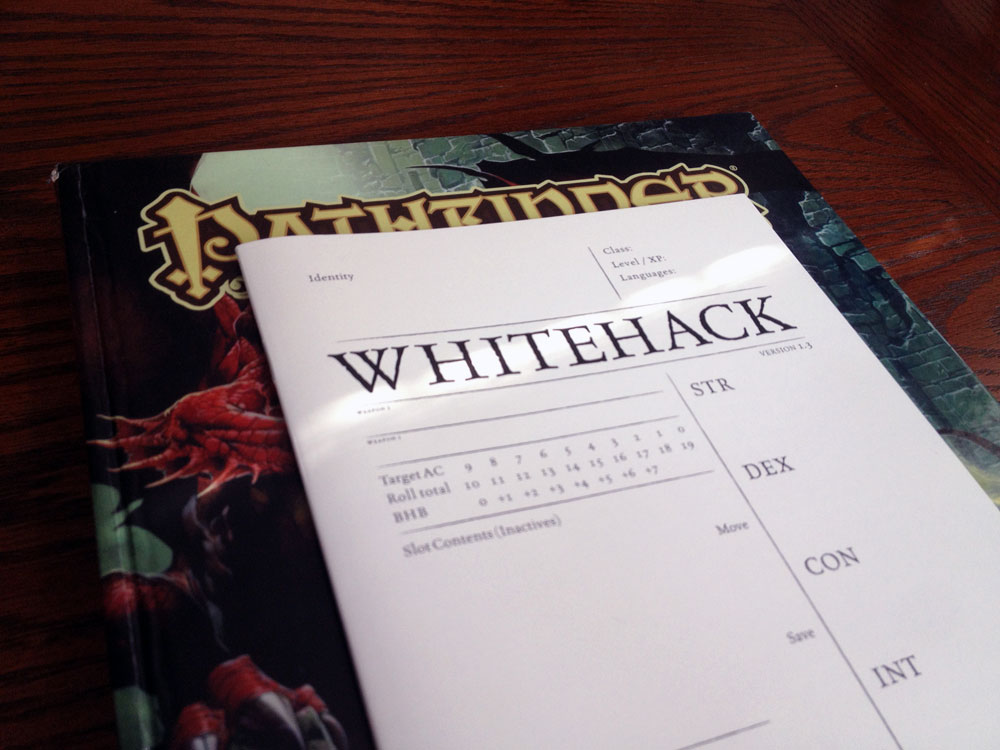 The first thing I learned before I even finished the second paragraph of the WHITEHACK is that the back cover of the rulebook contains eight premade characters and a huge list of character names to choose from. This is something I desperately wished was included in other RPGs I owned.

Now, if that was not enough for you, this game comes with two adventures and the outlines of a campaign setting! You really have just about everything you need in these 32 pages to start a game in just minutes after cracking it open. All that’s missing are the d6 and d20 dice required to play it. Nothing else.

This game has two pages dedicated to 76 different monsters to choose from. Based on their information you could easily create your own monsters to add to the game. This game does lack the style and flourish that other RPGs give their monsters. You’re not going to find in depth detail regarding what a Will-o-Wisp or Mimic are, but that’s what google is for.

Character creation at its core is wicked simple! Of course, time can be spent adding finesse to your character and all of it will easily fit on a sheet of notebook paper.

In addition to the three base classes (Deft, Strong, and Wise), WHITEHACK introduces a ‘group’ system. Each character created belongs to at least two groups and with time will eventually belong to more. Groups define your character’s species, affiliations, contacts, resources and are also broad definitions of skills one might possess. So, by combining classes and groups, you can play, for example, a “Strong Pit fighter” or a “Deft Kobold Assassin”.Having a group when attempting tasks means that you have an advantage others do not.

All groups are associated with an  attribute on the character sheet. When making tasks rolls using that specific attribute with a group roll 2d20 and choose the better score.

Combat feels refined and elegant. Something that is aided for the players by the games simple character sheet. Wielding weapons with different powers are easy enough to add up on your attack and melee rolls. The game also suggests using an “auctioning” system that allowing players to determine the outcomes of such encounters like chases or hordes. You are basically placing a bid to win this type of an counter. The rule reads, “Any participant starts with a bid that she promises to beat with a successful skill roll. For instance someone with dexterity 12 might bid 1, meaning that she promises to roll 12 or below but also more than 1. Any other contestants have to bid higher or make a final bid of 1 (a “one-bid”) to show that they are in the contest. When all have made their final bids, the one with the highest bid rolls first. If she succeeds, she has won the contest, but if she fails, the second highest bidder has to roll. The person with the lowest bid does not have to roll in the order to win if everyone else fails, but you have to bid to participate in the contest.”

WHITEHACK handles death in a way I have not quite read before. For starters, if you are attacked and take enough damage to drop you down to zero or negative hit points you have a special save option. Think of it as a boost of adrenaline at the last second allowing you to reduce the fatal hit by 1d6. Should a character hit points be reduced to zero or some number below zero that character is considered unconscious and injured. Now if that character is attacked again they can provide a saving throw. So long as the character passes the saving throw they will remain unconscious. If they fail they are dead but the character is allowed to continue playing in ghost form providing advice and maybe aid to their fellow players.

WHITEHACK is filled with other little gems that make it stand out as a unique RPG and I think people checking it out will be pleasantly surprised by them. Will WHITEHACK replace my current default RPG that I play with my friends? No, it won’t. But it easily could. Don’t let its small size diminish the fact that this is a full fledged and robust RPG.

For me chances are that the next time I go on a trip, or go to a con, I will be taking my copy of WHITEHACK with me rather than my normal rule books. Because of its size WHITEHACK is a great game to carry with you when you want to start up an impromptu game with people you meet out in the world. It’s also a great game for someone with not a lot of shelf space. This game feels solid and complete and during the course of reviewing it, I really could not find anything it was missing.