Welcome back to another boardgame review at Stargazer’s World!
For my second article I have chosen my newest acquisition: Tales of the Arabian Nights by Eric Goldberg, published by Z-Man-Games.

Tales of the Arabian Nights - Box

I have to digress a bit first:
Many of you will propably remember the Adventure Gamebooks from the eighties, like the Lone Wolf– or Fighting Fantasy-series. For those of you unfamiliar with the concept, here’s how those books work:
They are written from the point of view of the player character and every so often, the reader will be asked to make a decision. Each option has a chapter  number next to it, that tells you where your story continues. So a simple chapter might be “The path divides in front of you. If you want to go left, read on at 245. If you want to go right, read on at 431”. These books  often have simple rulesets with skills and combat rules. All you need for your solitaire-adventures is one of those paperbacks, a pencil and maybe a die.
For me these were actually my very first contact with the concept of fantasy roleplaying and I still treasure my copies of the Lone Wolf-books. I really loved to spend my time in the magic worlds these books created – and unlike other books they let me interact with the world and make my own choices. These books were the door to a whole new world of gaming and fantasy!
So, why am I telling you about this? Quite simple: Tales of the Arabian Nights basicaly is a very ambitious Chose-your-own-adventure-book with a board, a LOT of encounters and playable with up to six players. 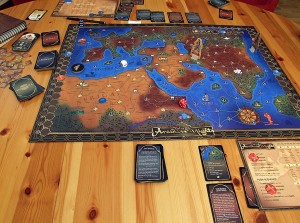 Tales of the Arabian Nights with two players

Tales of the Arabian Nights (TotAN for short) places the players in the middle of adventures from One Thousand and One Nights. You will be experiencing stories of adventure and wonder like those of Sindbad and Ali Baba (which are acutally playable characters).
During the game the players create random adventures from encounters and, by interconnecting these, weave legendary stories in their imagination. It can be heroic, whacky, funny and, I’ll admit it, sometimes stupid.
While TotAN is not quite unique, there definitly are very few boardgames that use a book with numbered paragraphs to tell a story. One that comes to mind is Barbarian Prince from Heritage USA (1981).
Some of you may already know TotAN from it’s ealier edition: It was originaly released by West End Games in 1985, though there have been significant changes between the two editions.

How does it work?

TotAN is not a very complicated game, but it requires a bit of work to run. The rulebook weighs in at 18 pages but that includes table of contents, designer’s notes, background info and lots of illustrations. If you understand the game it can be explained in fifteen minutes.

All characters start in Baghdad, with three Skills each. Skills come in many different forms (“Luck”, “Courtly Graces” or “Seamanship” for example) and give you advantages in encounters that refer to these skills.  You can gain and lose skills through encounters and it is obviously a rather good thing to have lots of skills.
Before the actual game begins players decide on their Victory Formula – which determines their goal in the game. While the game itself is very rich in theme, this goal is very unthematic and bland: Each player secretly distributes 20 points between Story Points and Destiny Points. These can be gained and lost throughout the game and if you reached your goal (for example 14 Story Points and 6 Destiny Points) and are back in Baghdad, you have won the game. There isn’t even some ingame explanation given or any description, what Story and Destiny Points represent. Meh!
So here’s my take on it: A few bored lads and lasses from ancient Baghdad had a rather wild night out on the town and after a few arabic coffees come up with a wager. They are to travel the world and whoever comes back with the biggest name and the wildest stories to tell is declared the winner. You know, just the typical stuff people did before television and the internet. 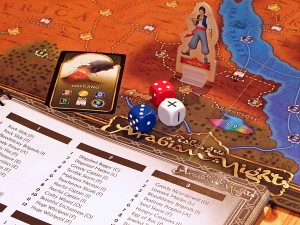 During the game players take turns travelling the world and having encounters in the space they end their movement in. These Encounters are the heart of the game and while the process is relatively simple in practice, it is very hard to describe in just a few words. I’ll try to give you a brief overview of how it works without going into all the details.

The encounters are determined and resolved by reading from the Book of Tales – a massive, spiral-bound 300-page book with 2600 different encounters! Let me give that to you in words: two-thousand-six-hundred encounters. That’s quite a few adventure hooks – I can assure you that.
The player to your left always has the Book of Tales on your turn and is called the Reader. So, when you have finished your move, the Reader determines from  the encounter card you have drawn,  which encounter table he must use this turn and asks you to roll a die. He then determines what you will encounter this turn (the picture “Some components”  (above) gives you an idea what this can look like). 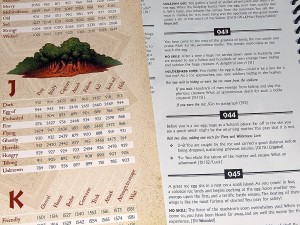 The player on your right is called the Matrix Reader, as he now consults the Reaction Matrices and tells you, what your possible reactions to this encounter are. The Reaction Matrices are three pages of tables that allow you to determine, which kind of reactions you can chose in certain encounters and tell the Reader which paragraph to read. You can see an example of a reaction matrix and encounters from the book of tales in the picture on the left.  After you have decided how to react to the encounter, the Reader goes to the paragraph determined by the reaction matrix (in the case on the picture on the left, it was to Study the Egg of a Roc – so we go to paragraph number 943). He then reads you the first paragraph and checks if you have any applicable skills. You get the choice of which skill you use (if any) but of course you will not know what the results will be before you make your choice.

After resolving your encounter, the Book of Tales and the Reaction Matrices are passed on and it is the next players turn.
I have to stress that the encounter system is really, really cleverly done. It is quite seldom that you get bogus encounters that doesn’t easily fit the characters location and the system ensures that you can’t encounter a lion in a forest or at sea for example.

Is it any good?

Obviously a game like this is not really about winning or strategy – if you are looking for a game that challenges your ability to outhink your opponents and to secure victory against the best laid plans of other players, this game is not it.

TotAN is a bit of a borderline case between roleplaying games and boardgames. Of course it obviously has a board and the actions of the players are limited by the rules and the game engine. But on the other hand there is very little strategy, winning is secondary and the focus of the game is the telling of stories – all things, that we don’t normaly associate with boardgames but with roleplaying games. The game is quite random, there is little player interaction and you have to accept, that you don’t have total control over what is going on. This are propably the reasons, why the game fails for many hardcore boardgamers – in many ways it’s really not what we expect a boardgame to be.
Talking about the games limitations, I should also mention, that looking up the encounters and flipping back and forth in the Book of Tales can be a bit tiresome. I’d also suggest, not to play the game with more than four people, as the downtime get’s too much and you also really can not follow the developing stories of the characters. Three players is propably ideal, as every player is somehow involved on each turn – one is reader, one active player and one matrix reader.

But if you can accept the game for what it is and enjoy the weaving of a story from random encounters and appreciate the sheer endless variety of it all  – and I assume that many roleplayers can – it is a great game. It’s a whole world to explore and the sheer ammount of encounters in the Book of Tales ensures that you will discover something new with every play.
What I have written about the game really just scratches the surface – your character can become a Sultan or a Slave, he (or she) can get married and have children, gain legendary treasures and find hidden Places of Power like the Valley of Diamonds or the Lake of Colors! The character can even become sex changed – yeah, there’s strange stuff going on in acient arabia! It is really a big world of fantastic tales.

So the next time your GM is completely burned out or a few players just don’t show up for your RPG-session but you still want to experience some marvelous adventures – why don’t you visit ancient arabia of legend with Tales of the Arabian Nights?