This is a short review about a PDF product we recently received a review copy of, Champions Universe by Hero Games.

This is the default Hero System superhero universe. A rich, detailed campaign setting imbued with the feel of traditional comic book universes populated with classic Champions villains and characters. It integrates elements from the Champions Online game with which I am not familiar so I can’t really judge that aspect. Full of elements reminiscent of the big two (Marvel and DC comics) but given their unique twist, familiar and new at the same time. While it includes some character write ups and sample NPCs there is a lot of fluff and inspiration that make this book a great resource, no matter which superhero role-playing game system you prefer.

I’ll admit I’m a Hero System fan. I was first bitten by the Champions bug while it was still in the 2nd edition, and the villains and organization books they put out back them just captured my imagination. I remember spending a whole summer creating characters and getting ready for my campaign. When I sat down with my players, they tried to create characters but never quiet wrapped their heads around the system, so we went back to playing the Marvel Superheroes RPG. I tried to rekindle my Champions dreams when the 3rd edition came out (with the AMAZING cover by George Perez) but when I destroyed the heroes on the first encounter the dream died that day at the table.

Still I pursued my love of the Champions Universe; I had loved the Hero Comics and snatched up the 1992 version of the Champions Universe book with the hopes of using the campaign for a future game, regardless of the system. I examined the book in excruciating detail, but must admit that I remember very few specifics. I didn’t even remember the book was written by Monte Cook and Illustrated by Storn Cook until I looked up the book online. It still sits on my shelf, with a lot of unused Champions and Justice Inc. (amazingly my FIRST Hero System purchase) materials.

And then along comes the 2010 Champions Universe. I’ve been away from Hero Games for a long time so when I sat down to read the digital copy of the setting I did so with fresh eyes. Old familiar faces were there, UNTIL, PRIMUS, VIPER, Doctor Destroyer, Mechanon, but it all felt new and shinny. The cover art and chapter openers by the Brothers Fraim were appropriately super heroic, capturing the feel of timeless comics. The layout and other interior art was top notch, this is one book I was happy just to look at. And I’m reviewing the PDF, in print this has to be one gorgeous book! 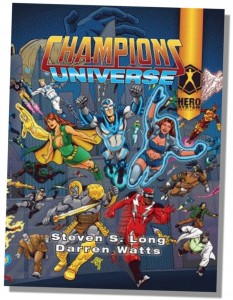 The history and timeline chapters paint a broad picture of a rich superhero setting that hits all the right notes of classic and modern comics, from Victorian extraordinary gentlemen to the golden age all the way to modern times. I said it before and I’ll say it again, it feels like a setting inspired by the big two comic book universes populated with characters that evocate the classical archetypes with their own unique twists. The discussion of superhero demographics and their impact on different aspects of world culture, technology, religion, the economy and the legal system was entertaining and gave me all sorts of ideas to include in any supers games.

Despite being obviously centered in the US and neighboring countries’ super humans, the book offered a true world perspective on super heroics. I was a little worried about the inclusion of the Champions Online content, which I’m not familiar with and feared might simply not fit well with the rest of the world they had created, but what I saw of the game in the book felt really like an organic addition to the tapestry that is the Champions Universe. The lists of threats, discussion on organizations, details on lost cities, other worlds and dimensions really rounded out the book well.

The inclusion of a GM Secrets Chapter gave the book an old school feel, so appropriate for a supers game, where not all is as it seems, like saying “here’s a peak behind the curtain!” If you are a player, heed the warning, don’t read this and you will be rewarded by the true superhero campaign experience. Character write ups were there, but I see no problem adapting them to other systems. This campaign setting is a great resource to any Game Master that wants to run a traditional superhero game, or see how to create one, and adapt it to their system of choice.

I whole heartedly recommend the Champions Universe to any fans of the superhero RPG genre!