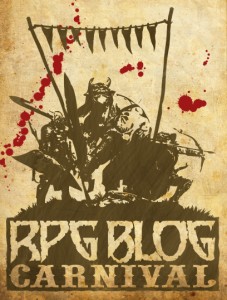 Mad Brew Labs is hosting this month’s RPG Blog Carnival and the topic is an interesting one, how to help the growth of the hobby? This is a topic I’m very interested in since over the last year I’ve tried to take an active role in the gaming community where I live.

I think the best thing we as individuals can do to help the hobby grow is take a cue from horticulturists, we need to prep the soil and help new plants grow, that means getting more people to play, be they lapsed players who’ve drifted away from the hobby or new people interested in role playing games. But how do we do this?

First of all I think it’s a matter of communication, getting in touch with other fellow fans, people who’ve heard about games and want to learn more about them. The internet is the obvious answer but I think we need to explore beyond the traditional places where we communicate. Company forums, established RPG communities are good, but the people you meet there are already hobbyist; I really believe we need to reach out. Social media networks like Facebook or Twitter are a great place to tell people about your hobby and invite them to play. Some people who use these web services may be casual fans unaware of more specialized sites and establishing a conversation may be the first step in getting them to play.

If you are lucky enough to have local stores that carry games, be it a comic story, a hobby shop or a large chain bookstore, this is an excellent place meet other role players. I see teens in Borders looking over the books and I try to strike up a conversation, ask then what they play, where they play. If they are interested in playing I want to see how I can help to get them to play, which brings me to my next point…

If you want to see the hobby grow, then you need to play with more people! This may sound like a no-brainer, and your experience may be different form mine, but ask yourself, when was the last time you played with new players? I play a regular weekly game with a very stable group so we rarely have the opportunity of having new players join us. And my gaming time is limited so I can’t really plan more games regularly. What I’ve tried to do is plan special activities through the group we’ve created in Facebook and have activities were players can get together, meet, get to know each other and hopefully establish new gaming groups. Also the group has organized demonstrations at local mini-conventions were we offer to teach people how to play. There is no greater satisfaction than seeing a new player roll dice for the first time.

We need to encourage people to play and give them the tools to do so. Forget about which system you play or which game you think is more or less balanced. Leave behind preconceptions and grudges and teach someone how to play! They will thank you for it…

Rolling up an Icon(ic) Superhero!