Waking up and pulling myself out of bed I was feeling like I had been at PAX a week already. I could not figure out why I was feeling like this. Maybe it was all the walking around and standing in lines the day before. Maybe eating out so much was catching up to me. Regardless Hannah was smiling and ready to start her day and I was hardly going to disappoint.

Hannah and I grabbed a quick bite to eat as we made our way back to Benaroya Hall to attend the “Penny Arcade Make a Strip” panel. Lyle joined us in line shortly after we arrived. When the doors to Benaroya Hall finally opened that morning everyone in line poured into the great hall and made their way to the seating area. Once everyone was seated The song “Hustling” by Rick Ross started blasting from speakers all around us as Gabe and Tycho entered the stage to a roaring applause. The two proceeded to create a comic strip for their website right before us all while they worked they also took questions from the audience. It was really funny and very entertaining and something we will do again for sure if we are lucky enough to attend PAX Prime in 2011. 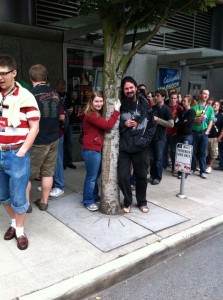 In line with Hannah and Lyle

After the “Make a Strip” panel finished we headed over to the Sheraton and got inline for “Acquisitions Incorporated: D&D Live”. This was a longer wait for us but the PAX Enforces did a decent job keeping everyone in line entertained as we waited to take our seats. Everyone in line seemed really nice. People in line where again either talking, Playing on their Nintendo DS’s or playing Zombie Dice. The three of us grabbed some carpet and talked about life, the universe and everything.

The doors eventually did open and we made our way inside and found good seating up close to the action. A large projector screen was center stage so even the people in the back of the room would be able to see the Dungeons & Dragons action going on. Chris Perkins from Wizards of the Coast and the DM of this game was already on stage making the final adjustments to his to props and miniatures.

Eventually everyone did get seated and cameras that would be projecting on to the screen in front of us where correctly setup. Then the players were introduced to great applause. Scott Kurtz as Binwin Bronzebottom, Wil Wheaton as Aeofel (Al), Gabe as Jim DarkMagic of the New Hampshire Darkmagics, and Tycho Omin Dran CEO of Acquisitions Incorporated. The object of this Acquisitions Incorporated Dungeons & Dragons game was to bring Wil Wheaton’s Character Aeofel, back from the dead if possible. It was an awesome game and I laughed pretty hard throughout the whole thing. I am sure that Wizards of the Coast will eventually post an official video/podcast of the game. When they do I will update this post with the link.

After the good time we had at the Acquisitions Incorporated game we all got right back in line for Wil Wheaton’s Awesome Hour that was also taking place in the Sheraton. Wil talk a bit about his life and then left the rest of the hour open to a Q and A session.

Day 2 at PAX was pretty much lines and panels. After Wil Wheaton’s talk the three of us got dinner. Again Lyle headed back home and Hannah and myself proceeded to walk around the open game rooms and look over the shoulders of other gamers till we where ready to head back to the hotel.

Even Stranger Things Are Coming