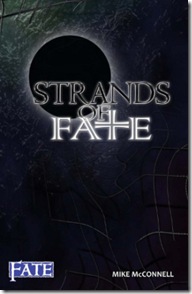 Strands of Fate is a heavily modified version  of the FATE rules written by Mike McConnell. The idea behind Strands of Fate was to create a streamlined version of FATE which can be used to run games in any genre. The 471-paged PDF is now available directly from the author for $10 right now, but it should appear on DriveThruRPG soon.

Here’s a list of the changes from “standard” FATE:

I haven’t had the time to give it a closer look, but from what I’ve seen it looks pretty promising. For more details on Strands of Fate, please check out the Void Star Games website.