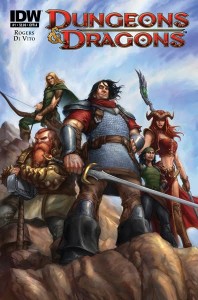 I hate being wrong, but not this time! Let me elaborate…

I wrote a previous post about the new Dungeons & Dragons comic published by IDW. I was less than impressed by their preview issue #0 and declared this a less than stellar debut. However my good friend Luis, who is also one of my regular players and works at the local FLG(comic)S, insisted that the new series was good and encouraged me to give it a try. I got issues #1 and #2 and after reading them I must say that despite my trepidation this is an excellent comic book.

I must concur with my friend Luis, the humor is spot on, the pace excellent and the art and writing top notch. The character are still stereotypical, the human fighter, the dwarven paladin, the elf ranger, the halfling thief, ahem sorry rogue, and the tiefling warlock, but the writer fleshes them out on the longer stories, they are still stereotypical enough that someone with passing knowledge of D&D can identify them, but the little details the writer peppers the story with makes them come alive.

The story proceeds swiftly and takes the character from one complication to the other and covers a lot of the typical troubles adventuring groups face, the local authorities that distrust them, or outright hate them, possession by evil powers, shape changers, and orcs. All in two issues! The humor is also fitting to the feel of D&D. At every table I have sat on, even among the most dedicated immersion role players, there is always room for a laugh, and this comes through in the character quips and conversations.

On my previous post I gripped that this did not feel like a comic book based on 4th edition and that it was a missed opportunity, and I have to take that back. It includes details like Fallcrest, the races and classes from the game and a comment by the Halfling that she has learned to bind her own wounds which I took to be a very covert reference to healing surges. I speculated that powers should be part of what the characters do on the comic book do, but upon reading the story I realized how awkward that would have been. These are all things that should be familiar to players of this edition, specially a new player who is getting his first look at what D&D when they read the comic. In fact is an excellent comic to hand to a new player who wants to know what a D&D adventure should be like and say “something like this”. 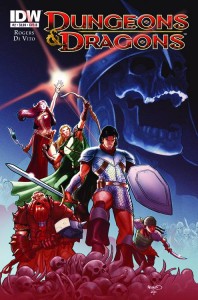 I think the creators of the comic crafted a story that will appeal to new fans of D&D, the new races are there, the new esthetics of the races as well (even a funky gnome wizard), references to the cosmology; while at the same time appealing to fans of older editions with fun classic fantasy stories. The plots are smart and play on the classic tropes. There are zombies, but the zombies are orphan zombie kids. There are orcs raiding a caravan, and the players are there, but they are looking for a shape shifter hiding in the caravan.

And if you absolutely, definitely, NEED to have some D&D 4th edition content, each of the issues I read has a character sheet for one of the main characters in the back. I did not read them extensively as they are for a game I’m not currently playing (except for one detail which I’ll get to in a minute).

Are the comics perfect? No, these are not the most profound stories. It’s a frolicking, light fantasy comic based on the D&D game. The art while excellent is a little off here and there, and I hope the writer can keep the momentum and humor going, even when the action comes to a natural lull at some point. I do have one nitpick (and it wouldn’t be one of my reviews without nitpicking)! The character sheet for the fighter and leader of the group in issue #1 listed his languages as common and dwarf, and in issue #2 he challenges the orc leader to single combat, in orc! Maybe this was the one phrase he knew, sort of like the phases in foreign languages one picks up thought time even if one does not speak the language. This is a minor nitpicks to an otherwise solid two issues.

Issue #0 was not a good representation of this comic, I guess they tried to cram as much as they could in a few short pages and it did not live up to the possibilities. Issue #1 and #2 did. I’m along for the ride. Guess this means my pull list at the comic store now includes two comics, Dungeons & Dragons and Knights of the Dinner Table.