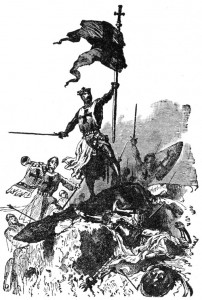 There is a lot of animosity between the old-school and new-school gaming groups. A lot of this I think is unnecessary. I mentioned briefly in my introduction that I am more of an old-school gamer. This isn’t entirely true. While I do enjoy the older games much more than the newer ones. There is a lot to be learned from any game.

I think that the fact that I mentioned my preferred game system was Castles & Crusades was hint to this line of thinking. It does use some things from the d20 era along with somethings from the older versions. I like this because I can use pretty much any material printed with very little conversion. Older or newer it doesn’t matter.

What I would like to talk about is how to take this one step further. Let us take a more modern game and see what we can mine from it to use in an old-school game or any game for that matter.

Today I want to talk about the FATE system and what I took from it. Ever since I read the old FATE 2e book a couple of years ago the idea of fate points stuck in my head. I thought I would try to bring this to my game and did so successfully.

Instead of making the fate points tie into aspects or having to make any rules changes, I simply gave each player 3 coins. They could use these coins to add +2 to a roll, re-roll any dice, or take narrative control. If they contributed something meaningful to the adventure, I would give them another coin.

Narrative control is the big one here. Not many old-school people would allow this type of thing. Since I am the type of GM that likes wing it, I didn’t think this would be a problem, and it wasn’t.

Let me give a quick example of how this went down and you may see where this could be fun.

We were of course playing C&C and the setup isn’t too far from the fight scene in the Mines of Moria from The Lord of the Rings. Five PCs fighting a lot of goblins, I don’t recall exactly but I would say about ten. One PC rolled and hit a goblin but only did 2 points of damage, he used a coin to add +2 for 4 points. One PC fumbled a roll and decided to re-roll. Standard usages for a coin.

Then the narrative started. (After a bit of prodding by me.) Realizing they were kind of hurting at this point. One of the PCs decides to say, “Something scares off the goblins.” I’m thinking okay, now I gotta come up with something. Then one of the other PCs says, “Wouldn’t it be cool if it was a big ass cave troll like in the movie.” I thought, hell yeah, here’s a coin. Then another of the PCs, “We are too weak to fight that. It’s an illusion.” Coin spent. Now I had a magic user to add to the combat, awesome.

Now this isn’t far off from what normally gets talked about at the table, the only difference is what they speculated was true. They really had a good time with this and I think others could too.

Have you used something like this in your games, or do you have any tips on merging old and new?

Doctor Who: Adventures in Time and Space Unboxing