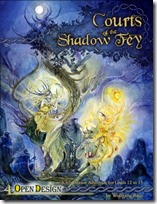 This time around, I will be bringing you my review of Wolfgang Baur’s Courts of the Shadow Fey, an adventure for 4e D&D designed for characters ranging from levels 12-15.  The adventure spans four acts which are made up of several different scenes.  These adventure sections include travel through the planes to the realm of the Shadow Fey, a court of devious and scheming elves.  I guess I should say up front that this is actually the first thing written by Mr. Baur that I have ever read, so what some people may already be familiar with in his writing, was all new to me.  Continuing with the pattern of my last review, I will be looking at the Good, the Bad, and the Miscellaneous as I explore the pages of this 100 page adventure supplement.

The art for the book was ok.  I won’t say it was the best I have seen, but I wouldn’t say that it is bad either.  The cover art is great and the images in the book that maintained that style were also very good.  I thought some of the creature and character art seemed to be about average.  I liked most of the Act heading pages as well.

Several maps included in the book were very nice.  Having the maps makes prep much easier for me as a Game Master.  I thought most of the maps were fairly detailed and clearly explained what was going on.

I found the adventure itself to be very intriguing.  It took a unique angle of approach to what could have been a fairly standard plot: freeing a city from its tyrant rulers.  The elves came off as possessing just the right amount of charming villainy.  A few moments within the adventure I thought to myself that some of the bad elves reminded me of Hans Gruber from the first Die Hard Movie: full of class, style, and greed.  A lot of the NPC’s in this adventure were very well described and had plenty of depth.  The ambassador, and his reactions in scene 5 stood out as being very well done.  The section on Atmospherics in chapter 2 The Invisible Courts presents very flavorful ways of “teasing” the party regarding encounters to come.  I especially liked a particularly interesting book, which I might just steal for my own home games.

This adventure was a lot more roleplay heavy than most I get a chance to read.  There were several areas that encourage roleplay over dice rolls.  I liked that.  However, the adventure was flexible; it included ways to go dice heavy and play it like most 4e adventures run.  Some of the information gathering skill challenges were very well written, making this adventure an entertaining read through.

However, there are two sections that stood out to me as being extremely well written and constructed: dueling and wooing elf lovers.  Both of these elements tie into one of the major plots within the adventure, gaining status within the Court.  I won’t go into specifics, but I will say that I really liked these two sections a lot.  They would make for great looting material, so even if you don’t think you will ever have a chance to run the adventure itself, you could easily pillage these two sections, change a few of the small details around, and then be able to run these mechanics in your own game.  The wooing “skill challenge” in particular took the skill challenge concept to an entirely new level.  One of the caveats to this comment is that I would have liked to have the tables, related to these two aspects of the adventure appearing in the back of the book as well as in the main text so as to make them easier to copy.  Those sections are fairly mechanics heavy and I feel like if I were to run it, I would want to have those parts of the adventure sitting on the table, separate from the adventure.  I also really loved the section on Trade and Bartering with the Fey.  This is another section, along with the ones I talked about above, which you could easily pull out and use in a home game that has nothing to do with this adventure.  The mechanics that are presented seem reasonable and balanced.

Speaking of the mechanical side of things, I would say that I found most of the encounters to be set up very well.  I loved that the encounters scaled based on the number of players involved in the game; that was a really well done method of reducing the amount of work that I would have to do running the adventure as a DM.  I liked how they were run and the details regarding when you should run them.  The sandbox section of the book was open regarding how the encounters should play out, which I felt was very useful.  I also loved some of the cool little mechanical ways to screw with the players.

Although most of the art was good, some of it wasn’t that great.  I also felt like a couple of the maps were surprisingly vague and void of interesting stuff to populate them.  Also, the size of some of the maps made them a bit hard to discern what was going on.  The book had a few editing problems, not many, but I did find at least one spot where a ### had been left in where a page number should have gone, there were a couple other very minor ones throughout, mostly words getting left out, nothing major.

There was one encounter in particular which I will not run in the book.  Ever.  It was remarkably confusing to read, so much so in fact that the author advised practicing the encounter before running it with your players.  Sorry, not going to happen.  I think I read that particular encounter about 5 times and I still don’t really get it.  If you pick up the book, you will know exactly which one I am talking about.  Unfortunately, I don’t really want to spoil anything about it because if you could actually figure out how to run it, and then run it successfully, I am sure that your players would love you for it.  It is a complicated encounter, which I think is above the heads of most DM’s, but on the off chance you figure it out, you are going to look like a genius in front of your players.  But, you won’t find me running that encounter at my table because I am just not confident in my understanding of a) how to do it and b) how to make it work using minis and a battle mat.

Also, I thought that for a paragon tier adventure, going from 12-15, that some of the monsters could have been designed a bit better in some places.  There were NPC’s in this adventure that fell flat for me when it came to what they could do on the battlefield.  Having interesting mechanics for monsters in 4e is a tough thing to manage, but I tend to focus on big name NPC’s and forgive some of the rank and file.  However, this book had a few main villain type characters which I thought could have been presented much better, especially the semi-central baddy in Act 1, though there is the potential that you would never actually face him in combat.

The fact that this was a fairly roleplay heavy book means that in my mind it is going to be a little lower on the “beat, smash, destroy” type of D&D that a lot of people play now.  My players relish the tactical encounter nature of the game, so they might not love this adventure, though I think they would at least enjoy it as a change of pace.

One of the last things that I want to call out is the fact that there wasn’t much player focused content in this adventure.  I know, I know.  This isn’t really intended for the players, since it is a DM focused adventure product.  That is fine.  But, just so that it is noted, there aren’t a lot of player-specific goodies in this adventure.  I didn’t find a whole lot of adventure specific magic items, or new items at all for that matter.  There were a ritual or two, and two feats, that I can remember off the top of my head.  I think there was definitely room to add some more new feats to this book, especially ones which could have added to the dueling and wooing scenes.  It would have been cool to have a bard with some feat like: Legendary Elven Lover, which gave him some skill bonuses and maybe an interesting effect which could have been used during these new mechanical areas of the game.  It would have also been nice, since status is such a big part of many sections of the adventure, to provide some feats for representing nobility or status outside of the Courts of the Shadow Fey.

I thought it was very interesting, that in a world where race and origin matter so much, that character gender was rather plainly ignored.  I think a lot of this adventure assumes that most of the characters will be males.  It doesn’t really come out and say it clearly, but I found the adventure to have a bit of a gender bias away from female adventurers.  I would say that most RPG’s and adventures are the same, but this one stood out because of the two sections that I liked so much in this module: the Dueling scenes and the Romance scenes.  Because the romance scenes are so prominent in the adventure, and there is a female NPC or two which are called out for wooing, I felt like there should have been maybe a single Male NPC for all the lady gamers to woo.  It also might have been nice to have a few female rakes or duelists.  I would assume an elven maiden can pick up a sword as well… Maybe that might have been a waste of pages, but a side bar would have been fine.  If there was one in the book and I missed it, sorry for bringing this all up.  It isn’t really so much a complaint, as a commentary on the hobby.  I don’t see much female minded content when it comes to these kind of romantic side-quests in adventures.  Guess it is up to the DM to switch those romantic encounters around enough to suit his players.

All in all, I would probably give this adventure a 4.5 out of 5.  I think it has just about something for every DM, but if you aren’t planning on running this adventure, and you are not a DM, there isn’t really any call to pick it up.  But, if you are looking for an adventure that focuses on slapping around some Fey, than you will probably find it here; even if you don’t want to let your characters run wild through the courts of Shadow Elf Nobles, you will probably find a few things that you can steal and add to your home campaign.  The mechanics for dueling, wooing, and status all easily carry over and could be modified quickly and simply for use in a homebrew world.  Oh.  I forgot to mention – roaches.  I thought the roach related goodness in this book was very…unpleasant.  So, that is definitely a good thing.

To Savage or Not to Savage