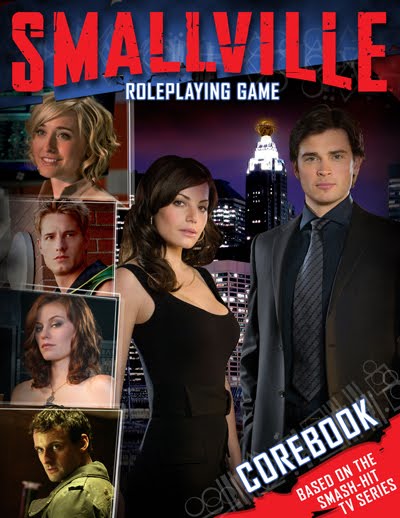 So let’s take a look at the Good and the Bad of the game and then I’ll wrap up with some random thoughts.

The core game book is very pretty.  It’s filled with lots of full color images from the show so chances are you have probably seen all these shots before if you actually watch it on TV.  The game uses the Cortex system, which can be a bit complicated to grasp, but when you boil it down, it works pretty easily.  As a simulation of the TV show, I think this game excels.  Although the show is very much about Superman as he grows up, it doesn’t really focus too much on the Superhero aspect too much.  Instead, this game is about developing relationships and playing them out to their logical or sometimes very illogical conclusions.  The game is designed for 4 players and character creation is done as a group; you develop a complex web of relationships as you build your character from start to finish.  These relationships become very important to your character and provide you bonuses throughout the game.  This is really a great reflection of how the show works; Smallville, the TV show, has always been much more about relationship drama than anything else.

As far as the bad goes, I hate to say but I had several complaints with the system and the book.  As a story telling game which focuses on the life of a hero as he or she gets super, the game falls a bit flat in several areas.  It doesn’t seem to me like the game would work all that well as a general Superheroes based game.  I haven’t played a lot of them, but if it were me, I’d probably want a bit more of a focus on all the superpowers and see those powers work more mechanically in the game.  In this RPG the powers behind the superhero take a bit of a backseat.  Relationships are clearly at the center of this game.  You really need a bunch of friends in order to play this; I really couldn’t see playing this game with less than 4-5 people.  Don’t look to this game if you are trying to play some generic supers game.  I just don’t see it working very well in that way.

This game is kind of a mixed bag.  Depending on what you want to use it for, it might be perfect.  As a story-telling game focusing on simulation of a licensed television show, the game works great.  If you like the Smallville TV show and want to play a game which is very closely based on it, than you have found the game you are looking for.  If you want to play a Supers game, you might want to look somewhere else.  There are a lot of other Supers games out there and this one might not be the one for you.

I think this whole RPG brings up a very interesting discussion about simulation in RPG’s in relationship to licensed products, especially Television shows.  There are lots of them out there; Margaret Weis also put out the Leverage RPG, based on that hit show; I’ll be doing a review of that here in a week or two as well.  But the problem with these type of games is the question of what you are actually trying to simulate.  If the attempt to simulate a particular show goes so deep as to limit its usability, it might not be such a great game.  But, if the game system is open enough, it could be a very good game.  I think the big issue is getting tired of what you’re playing.  I think I would have a lot of fun playing Smallville, since I like the show, but at the end of the day, I don’t really know what else I would use it for.  Overall, I’d give the game about a 4 out of 5.  It works great as a Simulation of the Smallville TV show and might even work pretty well if you were playing origin stories for other superheroes; but, if you are trying to play as the full-fledged man of steel, you probably want to pick up something else.