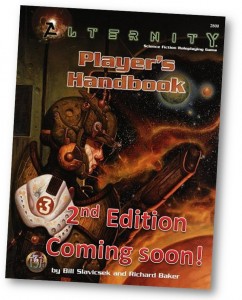 We’ve been sitting on this for a couple of weeks, dying to share it with our readers, but we couldn’t until all the details were worked out. Now that all that is taken care off we can share some exciting news… Here is the press release going out to gaming magazines (the two left) and gaming blogs later today.

The much beloved sci-fi game Alternity is back with a vengeance! The RPG originally published by Wizards of the Coast in the late 90s continues to have a huge fan base online, long after the line was discontinued by its publisher. The fans have clamored for a new edition and we listened. The newly formed Wolf-Micheri Ltd. Publishing has acquired the rights to publish Alternity materials.

The publishers have confirmed they are working on a second edition of the game integrating years of fan developments. They also intend to integrate the best innovations in game design theory that has developed since the line’s cancellation.

The stated purpose is for all past Alternity products to be partially compatible with the new edition with minor conversions. The new books, to be published in electronic form first and via major POD services in the coming months, will continue to be developed around the core two books; one aimed at players, the other at game masters.

The development team is composed of the best and brightest game developers in the blogosphere and Mr. Micheri has confirmed the new edition of Alternity will integrate elements modern gamers have come to expect: tactical combat rules, rules for the use of miniatures in the games, an upcoming miniature line, random collectable cards for skills, psionics, bionics and special equipment. The publisher went on to say, “Just because we criticize others for doing, doesn’t mean we won’t milk this baby for all its worth!”

Stay tuned to the blog for the launch of the official website coming soon.

Be ready for a new, exciting Alternity RPG. Not your father’s sci-fi game!

Have a great first day of April…

What Am I Playing Right Now?