I have no problems with people using the Stargazer’s World RSS feed as it is meant to be. The contents of the blog are usually licensed under CC BY-NC-SA after all. But it really pisses me off when someone takes the post and even the comments posted under them and posts them at his own site making it look like it was their content.

While moderating trackbacks this morning I noticed that one of those sites has starting misusing the posts we’ve written for Stargazer’s World over the last few weeks. I posted a screenshot of the site below. There is a small link “View full post on Stargazer’s World” linking back to the original article in there but still the site still is in violation of the CC license since it’s clearly commercial in nature. And if someone added Stargazer’s World to some kind of RPG Planet without asking for permission I might not even mind, but in this case it’s obvious that there’s no overzealous RPG fan at work. 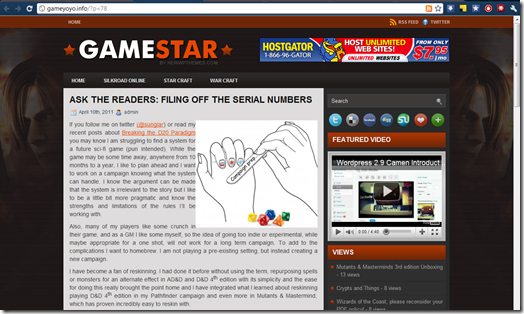 If there was some contact info on the site, I would have contacted the owner and kindly ask him to remove the feed. But in a way I think it’s a futile battle. There are hundreds of these sites all over the net that use other sites’ RSS feeds for their nefarious deeds.

Has anyone of you dealt with something like this before? Does it make sense to fight against these guys or is it like fighting windmills? Any advice? By the way, I am not linking directly to the site here, but the URL should be clearly visible in the screenshot above.

This is not a good way to start a day! *sigh*