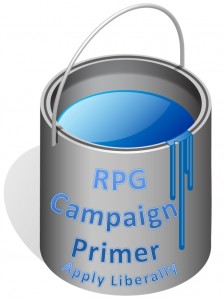 Fellow poster, and all around nice guy, Shinobicow (who also has a really cool nick, but I digress) wrote an excellent series of posts on World Building that he shared here on the blog. They are full of useful advice to get your campaign creation juices flowing.  One in particular caught my attention, Part 8, on actually getting your campaign started, touched up on a point near and dear to my heart, a campaign primer.

A way to introduce your setting to you players, giving them an idea of what the game they are about to embark upon is about. Shinobicow lists the ideas of handing out print copies, what he calls the drive-in method (jumping right in) and the elevator speech. Good stuff, go and read it. I have been pondering about this topic since reading the original post.

First about how to go about it… I used to create my campaigns by myself. Come up with concepts and ideas and then share that with players. Over the years I’ve become convinced that the more you involve your players in the process the more they are invested in the game. Not every player wants to create a campaign, that’s why YOU are the GM, but they may want to contribute depending on their interests. Some may want to create a city, a planet or an NPC; others may want to contribute some rules. Even something as simple as a campaign questionnaire can help you in this process.

Find your comfort level on how much you are willing to let go and invite them in. Parcel out the work and then as a god chef it’s up to you to use all the ingredients into a succulent campaign. But regardless of how much or how little the players contribute eventually you must put it all together. You must make sense of all the work and present it in a coherent way to your players…

I have tried different ways to introduce campaigns to my players through the years. From simply telling them about it, to introducing it piecemeal as we play; my first real attempt at creating a proper primer was during the AD&D 2nd edition phase of my homebrewed campaign. I sat down and collected all the data on history, races, kingdoms, and printed out an illustrated Players Guide to my campaign. My players back then appreciate it, and I know one who keeps it to this day (Pierre thanks for all the years playing), but looking it over now it seemed like a rather large and unwieldy hodge podge of information. Let’s see 50 pages, with cartography, a one page introduction to each kingdom, a random piece on coins.  Too much, too soon!

Then when we switched over to D&D 3rd edition I wrote a lengthy piece on the history of the world. Again too much detail too early on; since then I have tried to distill data, to find a way to share the most important information that conveys the basics of the campaign, captures the player’s interest and gets their creativity going. There is one lesson I learned from my very first Players Guide, the one page idea. Off all the parts of that document I think the part the players referred to the most was the one page descriptions of kingdoms and regions. In one page I described, through words and pictures, the very basics of the region.

For my current campaign I’ve tried to work within the one page limit. The goal is to distill the description of the campaign to one page. And the any additional information you need to hand out to players I try to keep to one page. Have I been successful? Not completely, some topics like religion have gone for two pages, and the full blown history of the campaign is much longer that 50 pages, but that additional information is optional, there for the player who is interested and wants to read it. All they need to play SHOULD be on the one page format.

And let’s break with the idea that all hands out need to be printed out. On this day and age we have so many new ways to engage our players. I have been using Power Point to great effect as introduction to campaigns, actual play aides and for adventure design. I first began using it to introduce a D20 Modern game and then prepared Power Point presentations for each session outlining adventures, including NPC images and even maps a la Indiana Jones with the plane traversing the map. I also used this strategy to introduce my Star Wars Saga System prequel Infinities campaign, opening scroll and all. When I used it as a game aide some slides would not get used, but they helped me visualize the game.

So consider Power Point as a tool for creating that campaign primer. Another new powerful tool is social media, not just to share information but actually to create content. Pages and groups can be created to share information, integrating images, music and video. Even creating profiles for groups or NPCs in your campaign can make them seem real to your players in ways a description on a handout cannot. Explore the possibilities they are exciting!

I have some other ideas on this matter, but I think this is enough for now. I’ll be back for part two soon.

Again thanks for Shinobicow for the inspiration for this post.