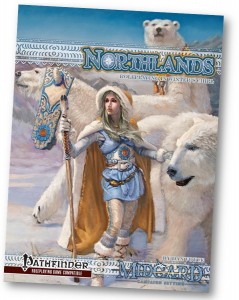 Northlands is a new supplement for the Pathfinder RPG published by Open Design games. It is setting book for their Midgard campaign setting. It’s a 112 page book, including a gorgeous color map of the Northlands and the Open Gaming License in the last two pages. The book is available in print for $19.95 (which includes a PDF copy of the book) and in PDF for $9.95. Here at Stargazer’s World we received a PDF copy of the book for review purposes and being the “Pathfinder Guy” (and I love that honorific) I sat down to devour the book. Little did I know real life would conspire to distract me and make my reading of the book take a tad bit longer (work, illness and new pets tend to do that). But, as the book so aptly puts it, such is fate! Thankfully my gæfa (luck) has taken a turn for the best and here is my review of the book.

What did I think about it? I loved it! Norsemen, their legends and mythology are such integral parts of fantasy gaming that a book like this seems like a no-brainer. But traditional fantasy has appropriated these tropes, myths and images and dropped them into the stew of pseudo medieval/dark ages/ renaissance mish mash that is the typical fantasy campaign (not knocking it if that is what you like, don’t construe that last sentence as value judgment). Here is a book that presents the creatures, culture and legends of the mythical north in a way that feels authentic and filled with gaming opportunities. I heartily recommend it!

I have loved “Vikings” since I was little. I know the term is sometimes used to group together historically disparate cultures, myths and histories in a grab bag Hollywood sense, but as a child as I read the history of the north I could not help it but be enraptured. Later when I began gaming many of the ideas in D&D were familiar because they were borrowed from (among other things) the myths that so captured my imagination. When I first read Beowulf I immediately began to stat the characters in my head. So when, within the first six pages of the book I run into a side bar detailing said epic as an adventure idea to illustrate playing the sagas as adventures, well consider me sold on the book.

The first chapter is an excellent primer about what life is like in the hard unforgiving north, from culture, to details about daily life, hospitality, games… The discussion about honor was very interesting, there is a section about types of drink and their potency, even religion, with description of the deities and what they expect of their followers. There are rules, such as the DC for the different types of drinks and the Domains of the gods, but they are so well integrated into the text they are not intrusive; indeed you may even forget you are reading a rule book, and that to me is high praise! 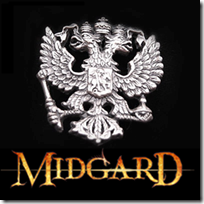 Chapter two is a guide to the Northlands, the region of Midgard populated by the people and creatures described in this book. It includes a brief overview of its history, places and races, as well as a guide to the vast north. My knowledge of Midgard is based on what I’ve read in Kobold Quarterly and the website, and what I read here really makes me want to learn more of what is obviously a vibrant, exciting and well put together campaign world.

And then there is chapter two, aptly titles Heroes of the North. Here are a lot of the crunchy bits. Discussion about human cultures, as well as the Hyperboreans, humans born in the lands where the day and night last months, and depending on the season they were born they have different stats, interesting stuff, with good mechanics and lots of role playing potential. There are alternate racial traits for the local dwarves, and the Troll-Kin race. Classes are also discussed; the Barbarian obviously gets a lot of love with new rage powers and paths, the Bard has an alternate version, the Skald, I have seen the class done before, but I think the options fit the feel and tone of the book seamlessly.

Clerics get new domains fitting to the north, Sorcerers get Bloodlines, and Monks, a class I would not normally immediately associate with the setting get a lot of attention. Here they are brawlers, wrestlers; this is a great way to play a very different Monk. Oracles and Witches from the Advanced Player’s Guide get goodies as well. It is good to see they take these two classes, which fit with the milieu very well, into account.

Alternate uses for skills, like for skiing and skating (I kid you not!) are touched upon, new feats running the gamut, including Teamwork feats, always nice to see. I’m a big fan of Traits (and you can see the rules for them here in the Pathfinder SRD) as a way to individualize character origins and this book had a great selection. Equipment rounds out the section. And while the details and options are nice I am not a fan of more and more equipment. But that’s just me; all the stuff here is useful and evocative.

Chapter four is all about magic, of course there are spells, and lots of them with evocative names and very interesting options. With spells I always like to see them in play since my players are definitely more creative than me with their applications. I will be using these spells. But there is more… Grudge magic builds off existing effects and powers and plays off the Fate mechanics in a later chapter, but it’s nicely integrated with the Action Points option, again from the Advanced Players Guide. Rune magic you get access to through feats and each runes gives you bonuses and powers and again seem rife with possibilities for role playing. There are Incantations, magic items, artifacts; crunchy goodness!

Chapter 5 is about the land, the environmental dangers, rules for chases in the north, new hazards, new haunts; it all makes sense in a setting where the unforgiving nature of the environment is such a vital part of the feel of the campaign. The Fate mechanic and how it plays off Action Points, the integration of Fate Afflictions, all seem intriguing and very well thought of for the campaign. Very campaign specific, and again a great integration of mechanics and role playing, something that’s big for me as you can see.

Chapter six is the bestiary, and of course there are giants and valkyries, but there is so much more. The CR spread is nice, mostly mid and high CR. The illustrations of all twelve creatures are top notch and there are no simple write ups, these are creatures integrated into the campaign’s mythology. The book finishes with a one page color map of the Northlands, excellent cartography and big enough in scope so a GM can fill in the details. The art on the book is sparse but very good, a combination of what seems to be woodcuts or historical pieces; I have no idea if they are reproductions in that style or the real things, but regardless they are put to good use. Chapter opener illustrations are my favorite, each embodies the theme of what’s about to be presented, and the cover is beautiful.

I really wish the book had an index, but that is really a minor quibble in an otherwise excellent book. This is a topic covered before in other supplements, but none of the supplements before made me want to read the whole thing. I would pick and choose pieces to read on those books, but this one really captured my imagination. I may not use the Northlands itself as a setting, but most of this will be incorporated into the “Viking” inspired regions of my home brewed campaign.

This book has a lot of details crammed in it. I love that it plays to the Pathfinder RPG strengths, uses all the options and systems developed for the game. This is not a D&D project with a few bells and whistles added to call it Pathfinder; it is designed for the system. Dan Voyce and all the other designers involved deserve to be praised for their work, as well as the patrons who supported them.

If you are a Pathfinder fan get this book and embark on your perilous adventure to the north!

“A rose by any other name…” Poetry and Role Playing Games