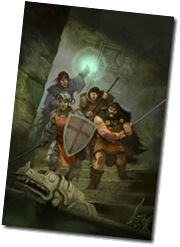 Some time ago I reviewed the Dragon Warriors RPG here on Stargazer’s World. Alas Magnum Opus Press lost the license to produce the game a while ago and all Dragon Warriors products went out of print again. Luckily I was able to get a hardcopy of the core rules and several PDF products before that.

As I already mentioned in my review, Serpent King Games picked up the license and planned to rerelease the game in a revised edition. And since a few days, Dragon Warriors is available at DriveThruRPG again.

The revised edition incorporates all errata to the 2008 printing, but as far as I can tell it’s basically similar to the old edition. So if you already own the 2008 edition, you might not be interested to pick that game up.

Alas the PDF sets you back $20, which is a bit high for my taste. I think more people would give Dragon Warriors a try if it were available as a lower price. In times where you can get all Pathfinder core books for just $10, paying twice as much for a mostly black & white book seems a bit overpriced.

Aside from that I wholeheartedly recommend anyone who is into old-school gaming to check out this classic British roleplaying game.